America has ‘a long way to go’

Local leaders, black and white, weigh in on racial climate 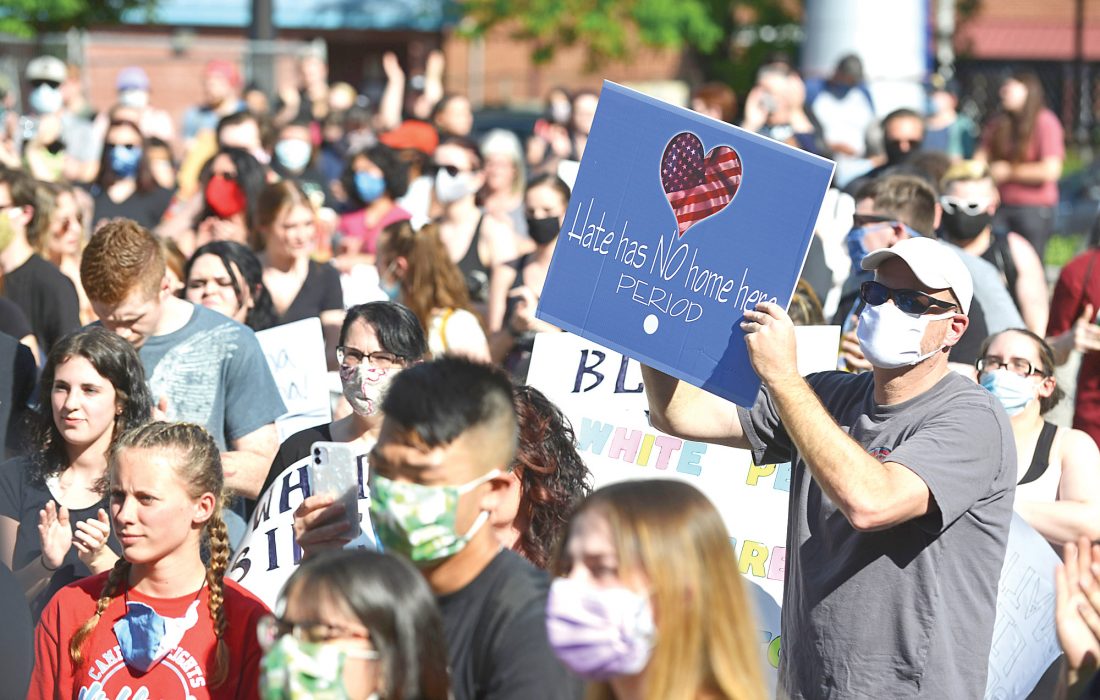 A man holds a sign as he listens to speakers at the Put People First PA! March at Heritage Plaza on June 6. Mirror photo by Patrick Waksmunski

Retired Altoona pastor Paul Johnson was sitting by himself at a recent funeral reception, in the line of sight for three white men about 20 feet away.

Johnson, who is black, wondered what they were thinking, given the preoccupation over the death of George Floyd in Minneapolis, and given the protests, including the riots, that followed.

One of the white men got up, walked over, sat down by Johnson, and observed, “Things are pretty messed up, aren’t they?”

The surprising and kindly initiative by the white man could be a model for individuals everywhere as the nation struggles to come to terms with the May 25 killing of Floyd, the history of racial misconduct by police that preceded it and the protests that followed, according to Johnson — who was reluctant at first to speak about the Floyd case.

“By this, all men shall know you are my disciples: that you have love for one another,” Johnson said, quoting the Gospel of John.

On June 4, less than a week after people wielding guns showed up to protect property at a protest gathering in Hollidaysburg and during a time when leaders in many areas were calling for military intervention, the city put out a news release about a “human rights march” that occurred last Saturday, at which the Altoona Police Department would “assist the marchers … and ensure their safety.”

It seemed to set a tone for what followed.

It was a tone struck again during the rally in Heritage Plaza that preceded the march, when police Sgt. Matt Plummer, who’s white and who was helping coordinate the protection effort, hugged one of the speakers, Kendel Butler, who is black.

Plummer and Butler got together before the march to help ensure its success, Plummer said.

That began when the sergeant, on behalf of the department, contacted protest organizers, after which Butler responded.

When they met, they spoke for two hours and found lots in common, Plummer said.

Working with Plummer shows “not all police are the problem,” Butler said.

“Nobody dislikes a bad cop more than a good cop,” Plummer said, pointing out that what happened in Minneapolis has cast suspicion on the entire profession.

They came to an understanding:

During the rally and march, people were able to voice their opinions without violence and property damage, and APD “was totally supportive,” Plummer said.

“It was kind of an honor to work with the protest,” he added. “It showed that on our side, we too stand against racism, police corruption and police brutality.”

For his part, Butler doesn’t think “rioting or looting is the answer,” especially given that many victims are black.

They plan to continue working together.

Butler envisions programs involving kids interacting with officers, so kids can see “how things should be” — including arrests.

He also envisions encouraging all individuals with responsibility to become accountable for making things better in their neighborhoods, their schools, their jobs and businesses, he said.

It will take a long time and needs to include encouragement of simple “decency,” he said.

In 15 or 20 years, the kids they target will be police officers, prosecutors and judges, he said.

“We’ve got to move forward, stop complaining about problems and try to fix them,” Butler said.

Plummer, who grew up in Bellwood, didn’t become familiar with black people until he played football at Shippensburg, then served in the National Guard.

He got to know fellow Guard members in his barracks, including those who identified as gang members.

Confined together, they found there weren’t as many differences as they might have expected.

It was an experience of “brothers beside you,” he said.

Plummer had a negative encounter with police once, after he was himself an officer, and it was enlightening.

He uses it when helping to train new officers, to make the point that it’s critical “not to jump the gun,” but rather to get “the entire story,” he said.

Encounters with the law have the potential for ruining people’s lives, he said.

He’s an advocate for community policing, which encourages officers to interact with residents as “human being(s), no different than anyone else.”

It’s a “blessing” that things seem to be on a good footing in Blair County, Butler said.

But “nothing is guaranteed,” he said.

Ahmil Johnson, one of the protest organizers, doesn’t agree with the rioters who burned down businesses.

“But if that’s what it takes for our voices to be heard, that’s what it’s going to have to take,” Johnson said, noting that the riots seem to have incentivized prosecutorial action in the Floyd case.

Johnson, who is black, was inspired to organize last Saturday’s march after an encounter shortly before with Altoona police, which occurred when he was running in the street to meet someone in the wee hours — and was told that was illegal, he said.

He complained and was told he was stopped because of suspicion he’d been involved in recent vehicle break-ins — but neither of the officers who stopped him asked to search the bag he was carrying, which seemed to undercut that explanation, he said.

He later got an apology, he said.

Seeing the video of Floyd’s death made him think, “that could have been me,” he said.

She’s an incurable optimist, however, and hopes “this will be the one (incident) that really solidifies the movement to make significant changes going forward.”

Those should include a greater training emphasis for police on de-escalation, mediation and safety measures, Gority said.

She doesn’t want to put police at risk, though, she said.

“There’s got to be a happy medium,” she stated.

She doesn’t have patience for the burning and looting, which only diminishes their cause, she said.

Still, she understands the anger and frustration of protesters, she said.

She’s proud of local people for their peaceful protest, and said she hopes to get more involved in helping push for reform.

Derek Chauvin, the Minneapolis cop who was charged with second-degree murder in Floyd’s death, should be charged with first-degree murder, based on what he saw, according to Rich Consiglio, former Blair County district attorney.

“I’m very pro-police,” Consiglio said. “But there’s a difference between being pro-police and someone murdering someone.”

He sees nothing wrong with the national protests, he said.

But the rioting needs to be “quelled” — including by the National Guard, if local police can’t handle it, Consiglio said.

And people need to acknowledge the deaths that have occurred as a result of the unrest, he said.

Do people even care to learn the names, he wondered rhetorically.

What happened to Floyd should never happen to anyone, although to blame every police officer for what Chauvin did is wrong, according to state Sen. Judy Ward, R-Blair.

“In every profession, there are people who are good at their job and people not so good,” Ward said.

People clearly have a right to protest but not to destroy property and loot, she said.

Peaceful protest is how change happens, she said.

State Rep. Lou Schmitt, R-Altoona, who described himself as a law-and-order guy, was “really, really glad” the Altoona protest was peaceful — even as the trigger for the protest was revolting.

It was “one of the most gut-wrenching, heartbreaking, heinous acts” he ever saw, “almost indescribable in its depravity,” Schmitt said.

It was also unconscionable for the other officers at the scene not to have stepped in “to protect a helpless individual,” he said.

A former basketball player, Schmitt grew up in Altoona with a group of friends that included black kids.

They stayed in one another’s houses routinely.

He never saw the kind of “terrible acts of racism that were happening in other places,” he said.

Schmitt spoke favorably of proposals in the General Assembly to ban chokeholds and improve police training.

But proposals in other jurisdictions to defund the police go too far, he said.

Though he knew the outcome of the video, watching it made his heart race in distress, said state Rep. Jim Gregory, R-Hollidaysburg.

“I was internally screaming, ‘when is somebody going to take that guy off him?'” he said.

He will never be able “to empathize fully with what it’s like to be black in America,” although he has sought help with it from Blair County NAACP President Don Witherspoon, Gregory said.

Witherspoon has encouraged him to take the anger and frustration he’s witnessed to Harrisburg to help make a difference, according to Gregory.

He hopes the local protest raises the conscience and conversation here “to a higher level.”

“Unfortunately, it takes these kinds of events,” Gregory said.

More people are paying attention to the problem now, said Andrea Taylor of Altoona, who is black, during the march.

“I think we’re heading in the right direction,” Witherspoon said.

And young people — in a variety of racial and ethnic combinations — are leading the way, which is satisfying, Witherspoon said.