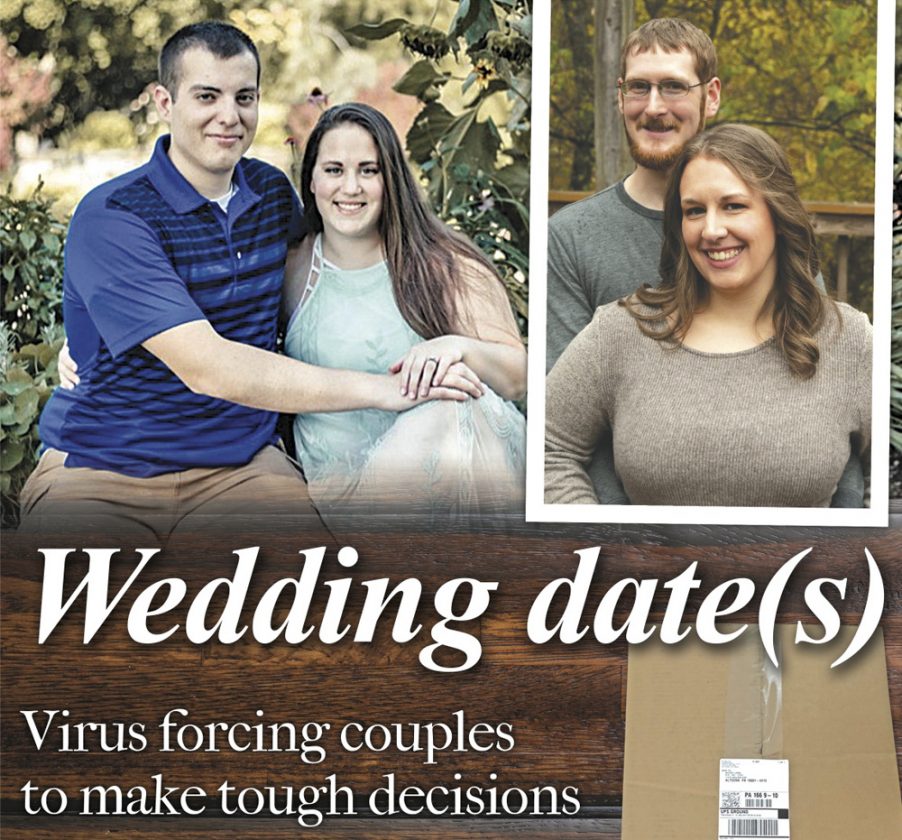 Courtesy photos / Photo illustration by Nick Anna Left: Katie Altiero and Jared Bender. Right: Kelsey Long and Wesley Weyandt. Kelsey Long had her wedding dress mailed to her when David’s Bridal shut down the store due to the pandemic.

Katie Altiero and Jared Bender planned for two years to get married Saturday, going through the often painstaking process of finalizing every little detail to enjoy their dream wedding.

Then came the coronavirus pandemic, throwing a monkey wrench into all their plans.

Like so many couples around the country in recent weeks, Katie and Jared, both of Altoona, have had to make the best impromptu decision about their wedding. The primary options included:

* Keep the planned date, knowing that very few guests would be able to attend.

* Try to push the date back to later this year and hope coronavirus concerns would lessen.

* Scrap plans for this year and instead postpone the wedding to next year, when the country presumably would be in much better shape.

“We’ve been waiting for two years on this date, so we just decided to keep it,” Katie said.

The couple will swap vows, but not in front of 250 guests, as they had planned for all along. Instead, only about 25 people are expected to attend the wedding, the maximum number allowed by the state right now for gatherings.

Katie and Jared do plan to hold their big reception, but it will just have to wait a year.

“Since a lot of the vendors are already booked up through the next year, we decided just to do it closest to our one-year anniversary,” Katie said. “We’ve already purchased everything, and we’re probably just going to renew our vows next year.”

Katie said she was frustrated early on about having to change plans, but she came to terms with it.

“We can’t really control it,” she said. “I mean, most of the people who are invited to the wedding have never seen anything like this in their lifetime, so this is our luck.”

‘You’re going to do what with my dress?’

The peak wedding season in the U.S. runs from May through October. While many couples might be able to hold off a little longer to make final decisions about dates scheduled for later this year, those getting married over the next couple of months have faced a tighter deadline to determine what to do.

Kelsey Long and Wesley Weyandt, both of Altoona, were scheduled to get married one week ago. But they decided a while ago that the date probably wasn’t going to work, so they pushed it back to June 20.

wouldn’t have been able to make all the final arrangements in the weeks leading up to a mid-May ceremony because of so many coronavirus restrictions. By holding off for a month, she hopes to have time to get everything in order.

“I didn’t want to move it,” Kelsey said, “but in the end, I decided it was the smartest idea. Even if things had gone back to normal (quickly), I don’t know if I’d gotten everything done in time.”

Kelsey and Wesley plan to have about 100 guests at their wedding, and they’re hopeful that can happen next month. The couple was able to get the word out quickly to all their guests, and most said they’d be able to change their plans so they could attend in June.

Still, there are other concerns than just pushing back the date.

“There may be some people out there that, even if the shutdown’s over, they may not be comfortable being in a gathering,” Kelsey said.

Wesley’s grandmother has cancer, Kelsey said, so there’s a concern if she’ll be able to attend the wedding, although for now the plan is that she will make it.

Kelsey said she was “definitely frustrated” by having to juggle her wedding plans at the beginning of the coronavirus outbreak.

“When this first came out, I think I took it the way a lot of people did — I don’t think it’s as bad as a lot of people think it is,” she said. “At first I didn’t even think anything of it. It wasn’t until all the essential businesses started closing that I started to get worried.

“The minute it really hit me was when David’s Bridal called me, and at the time it was a two-week shutdown, that two weeks happened to fall when my (dress) fitting was.”

Oh, about the dress.

Kelsey was stunned when told that the bridal shop, which was closed to the public, would have to mail her dress to her in a box.

“I said, ‘You’re going to do what with my wedding dress?'” Kelsey exclaimed. “Because I just couldn’t imagine taking my dress and shoving it in a box.

“I was trying to picture the box in my head. Are they going to roll it up and put it in the smallest box possible or put it in a bag?”

‘It’s a day that you want to have family there’

Couples who want to ensure having a large gathering at their wedding just may need to hold off on having the ceremony for a year. That will be the case for Jennifer and Tyler, who asked that their last names be withheld for privacy.

The couple was to be married in Altoona early this summer, but decided to push back the wedding until early next summer.

“It’s a day that you want to have family there,” said Tyler, who’s from the Pittsburgh area. “We knew that only pushing back a month or two, we wouldn’t be able to have the amount of people we want there.”

The couple invited 250-300 people for their wedding, and now hope to get 150-200 for the rescheduled event next year.

“It’s going to be hard to get back to normal,” Tyler said. “As much as you want it to, people will still be wary (of travel and large gatherings).”

All of the wedding plans had been made “to a T,” said Tyler, who added that about the only thing they were still waiting for was his tuxedo.

Jennifer’s bridal shower was scheduled for the weekend that the national lockdown took effect, so she missed out on seeing many family members and friends.

“I don’t blame people at all,” she said, “but we lost about 75 percent of the guest list because most of the people that were coming were older relatives and friends.”

Jennifer, who’s from Blair County, said she was really calm about the situation at first.

“When I think it finally started to sink in just how uncertain times were going to be, it really started to become more difficult to get a new wedding date picked, and I started to experience the heightened emotions,” she said. “We basically spent an entire year just planning the day we were going to be married. It felt very much like having the rug pulled out from under you.”

Jennifer has learned a couple of important things and gave two pieces of advice to couples now planning their weddings.

“A, limit the amount of things that you get that have your wedding date on them, just in case,” she said. “And B, remember that you can get attached to a date, but it’s not about the calendar date. It’s about the actual thing that’s about to take place. Think about what’s going to make it special to you.”