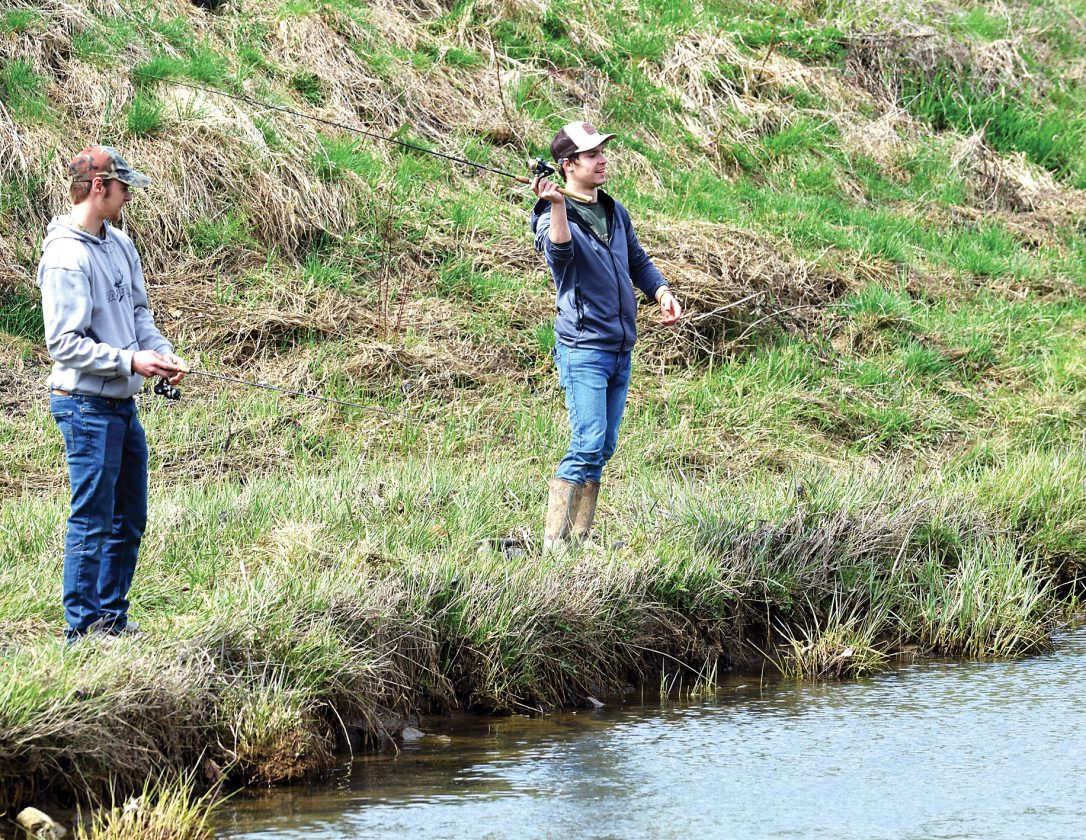 HOLLIDAYSBURG — Trout fishermen all across Pennsylvania can now find a sliver of a silver lining in the wake of the COVID-19 pandemic that has crippled the country over the past four weeks.

In an effort to enhance social distancing guidelines and cut down on traditionally heavy trout opening-day crowds, the Pennsylvania Fish and Boat Commission made an 11th hour announcement for the 2020 trout season to start at 8 a.m. Tuesday in all of the state’s waters.

The state’s trout opener had originally been set for Saturday, April 18, but was suddenly moved up.

That means 11 more days of fishing for all Pennsylvania trout fishermen this year, although all said that they were caught by surprise while casting their lines for the first time this season on Tuesday.

“I’m shocked. I think it caught everybody off guard, to be honest,” Jim Mills, 61, of Altoona, said of the PFBC announcement after wrapping up a productive first day of fishing at Canoe Creek. “I have an app for the Fish and Game Commission on my phone. A friend of mine called me (about the PFBC) announcement, then I looked at the app on my phone, and that’s how I found out about it.”

The PFBC is requesting fishermen practice social distancing by staying at least 6 feet apart — an arm’s length, plus the length of a fishing rod is a good guide — as well as covering their faces with a mask or cloth, never sharing fishing gear, avoiding carpooling and restricting their fishing parties to family members living in the same household.

People fishing Tuesday along Canoe Creek were generally fishing in small groups in which everybody was appropriately distanced, but none could be seen wearing masks.

Mills, who said he had caught and released about 20 trout on spinning lures by early afternoon, had a mask in his possession, but said he wasn’t wearing it because he was fishing a considerable distance from everybody that he had encountered.

Vast expanses of the stream were unoccupied, including some of the most generally populated fishing holes.

But that could have been due to the PFBC’s last-minute announcement as well.

“I don’t know if people didn’t know about it because they opened early,” said Jay Williams, 35, whose house is located within a short walking distance of Canoe Creek off Beaver Dam Road. “I guess we’ll find out more (today) when more people know.”

Williams’ 12-year-old daughter, Madison, was fishing with him, and she was enthused about the early opener.

Volunteers are not permitted to assist in trout stocking until further notice, and stocking schedules will not be released publicly prior to stocking dates, in order to limit crowds.

“Right now, all stocking times are confidential, and the purpose of that is to limit any additional congregation, but I will say that all the streams in Blair County have been stocked, and people can still go to fish any stream where they have traditionally gone fishing before,” Sauserman said.

Minimizing crowds along streams to ensure public safety is a priority at this time, said Sauserman, who pointed out that the PFBC’s decision to start the trout season Tuesday was not an arbitrary one made solely by the Commission itself, but one which was also executed in conjunction with Pennsylvania Gov. Tom Wolf’s office.

“We realize that this announcement is another disruption to tradition, but it is in the best interest of public health and safety,” Tim Schaeffer, PFBC executive director, said in a news release. “We have already seen that anglers and boaters across the commonwealth are willing to adapt their behavior to include social distancing, and we ask everyone to follow their lead while enjoying outdoor activities during this challenging time. The trout we have been stocking have had time to spread out, and so should you.”

Greg Furio, 27, of Altoona, had caught one trout Tuesday measuring just under 10 inches while fishing with waxworms and maggots.

Furio found out about the early trout start via the internet.

So does R.J. Barnard of Hollidaysburg, 33, who had caught and released 20 trout by early afternoon Tuesday.

Barnard is the head coach of the Penn State Altoona baseball team, and with all collegiate spring sports shut down because of the pandemic, he currently has some time on his hands that trout fishing can help to fill.

“I was a little shocked when I found out about it,” Barnard said of the announcement of the early trout opener. “But with not much else going on, (fishing) is a little cure for some boredom.”

In a related story, the 2020 Mentored Youth Trout Day, which had been scheduled for the entire state this Saturday, has been canceled, the PFBC announced Tuesday.

The PFBC will honor all Voluntary Youth Fishing Licenses purchased in 2020 for all mentored fishing opportunities during the 2021 season.