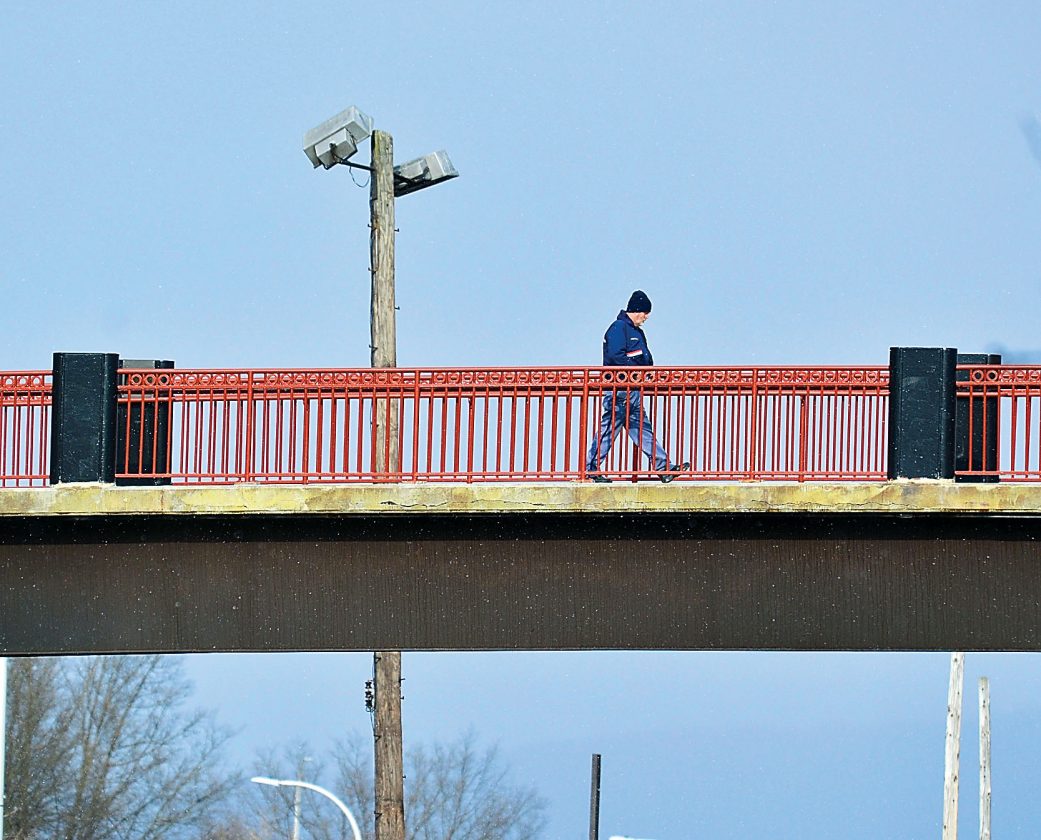 Mirror photo by Patrick Waksmunski / A postal worker walks across the 13th Street Pedestrian Bridge in Altoona after work on Thursday afternoon.

With temperatures expected in the 50s today, the question persists: Is Central Pennsylvania going to have a winter?

The Altoona area is currently on pace to have the third least snowiest winter in more than 50 years.

Normal snowfall for the Altoona area — measured at the Altoona-Blair County Airport — is 35 inches.

“This year we have 8.4 inches,” said AccuWeather meteorologist Dave Samuhel.

Laurel Summit, typically one of the snowiest spots in the area, has recorded 43.8 inches of snow so far, which would be the least snowiest winter since observations started there in 1998, said National Weather Service meteorologist Steve Travis.

Forecasters don’t expect to see a lot of snow in the near future.

“In our neck of the woods, winter can last into spring. I can’t say there won’t be any more snow, but a sustained cold and snowy pattern will not happen. There are no immediate snowstorms that we can see,” Samuhel said. “We are in dry pattern. There will be some cold air at the end of February into the beginning of March, (but) March may be below average. We could have some snow opportunities in late March. I can’t say we won’t get any more snow.”

This meteorological winter — which runs from Decem­­ber through February — is one of the warmest on record for the Altoona area, said National Weather Service meteorologist Matt Steinbugl.

Overall precipitation for the Altoona area is above normal.

The pattern has been unfavorable for snowstorms. Most have gone to the north and west over Pennsylvania, Steinbugl said.

“On the front side, warm air has been ahead of the storm tracks, the storm starts with some winter precipitation and changes to rain, warmer air has been dominating,” Steinbugl, a Bishop Guilfoyle Catholic High School graduate, said.

“We have had a lot of mild Pacific air moving east, it has been really cold in Canada and Alaska, the polar vortex has been stuck over the north pole,” Samuhel said.

The winter has not been a banner year for area ski resorts.

“The lack of natural snowfall has seemingly encouraged the casual skiers to not visit as much, but we have taken advantage of any chance we get to make snow and have been open since Thanksgiving,” said spokesman Aaron Weyman of Tussey Mountain Ski Resort in Boalsburg. “We have not opened all of our trails this season, but we have gotten enough open that allows our skiers and snowboarders to enjoy getting outside and on good, quality snow.

“The most difficult part is convincing people that even though you don’t have snow in your backyard we still have it here, and we have PistenBullys that groom the snow and make it awesome for skiing.”

It’s been an up and down winter at Blue Knob All Seasons Resort, which opened for the weekend of Dec. 7 and 8 and opened daily for the season on Dec. 13 with limited terrain.

“The biggest challenge for Blue Knob has been not only periods of warm, rainy weather, but the lack of consistent weather suitable for making snow for any length of time,” said spokeswoman Donna Himes.

“January was very challenging, and we did have some days that we had to close. Fortunately, we had enough snowmaking windows that we have been able to get very good coverage on 10 slopes and trails,” she said.

“The downside is that, due to continued periods of warm temperatures with rain, we have to continually replenish the existing snow pack and have been unable to get any additional terrain open. But we have been open every day for most of January and all of February,” Himes said.

“We are so lucky to have such an amazing snowmaking team and snowmaking system,” she said. “At the start of every season, we dive into snowmaking operations with a very aggressive approach, making as much snow as possible at every possible opportunity.

“It is because of this

philosophy and the hard work of our team that we are open today with plenty of slopes and trails available to every ability level,” Buchan said.

“Every season, our goal is to keep the slopes open into April, and we are working very hard to reach that goal, as we do every year. Historically, the month of March can bring some of the best snowstorms of the season, and we certainly hope to see a few of those come through, “ she said.

It has not been a great winter for local hardware stores.

“It is not as good as it was last year when we had a lot of winter. Most affected are sales of snow-related merchandise. It is cold so wood pellets are selling pretty well and electric and portable heaters are OK. We are not selling snow-related items because we haven’t had any snow,” said Doug Mingle, co-owner of Roaring Spring True Value.

“As far as ice melt, snow blowers and shovels, sales have definitely been down compared to last year. Last year we had a couple of big days. We still are selling a lot of premium wood pellets because the weather has been cold,” said assistant manager Tai Irwin of Fiore True Value Hardware in Altoona. “We had one spurt of freezing rain and were busy for a couple of days. Other than that it has been a slow winter.”

“We’ve had very atypical weather this year, and it has the potential to be devastating for fruit growers,” said co-owner Tod Manspeaker of Bedford County’s Briar Valley Vineyard and Winery.

“Fortunately for us, the vines are still dormant. When there is a warm snap in February the vines may start to wake up and send some sap up the trunk. As the temperature falls back down, they go back to sleep. This only causes us a problem if the temperature drops to minus 6, as the moisture may cause the vines to crack,” he said.

“We are pruning now and there isn’t any sap running, which means they are still asleep. We always like having a blanket of snow on the vine roots, as this insulates them against subzero temps. However, I always ‘hill up’ the vines, which is hilling dirt around the vine bases to provide protection,” Manspeaker said.