Avoid becoming a victim of phone, text or online fraud 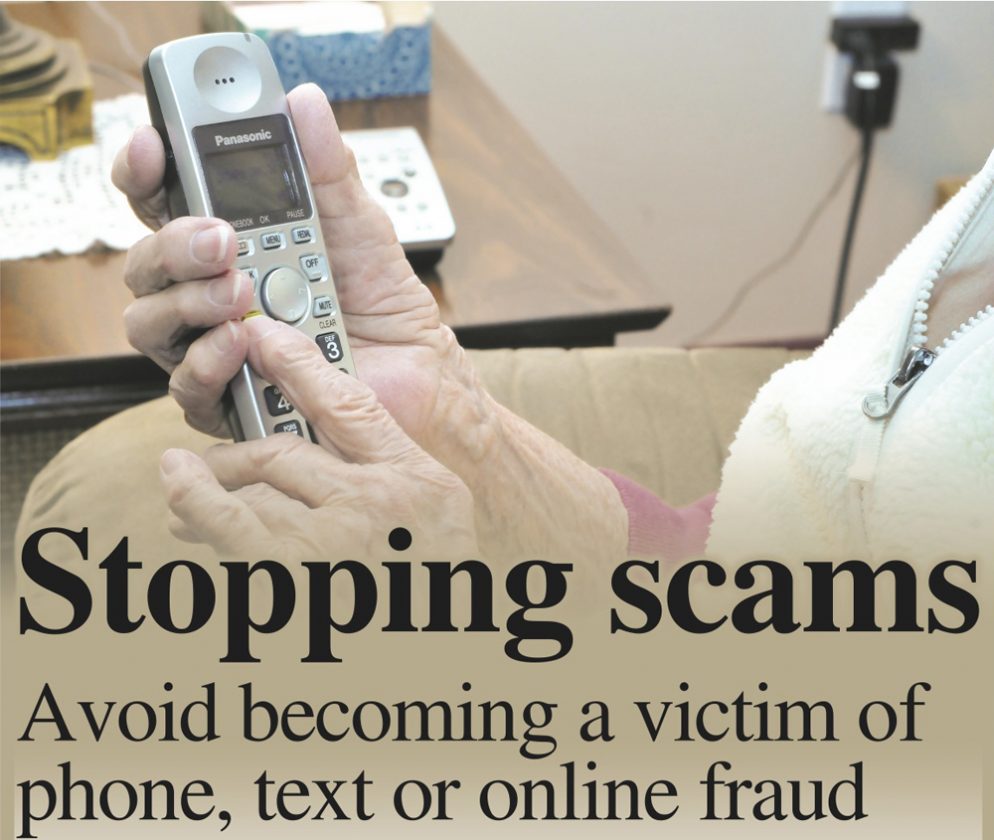 The arrest of a Massachusetts man accused in a phone scam that state police allege swindled a Frankstown Township man out of $8,000 in September highlights the ongoing threat that fraudsters pose to the public.

Liang Ma, 37, of Quincy, Mass., was arrested in Milton, Mass., in September and arraigned on theft-related charges in Blair County in January after he picked up an empty parcel at a vacant house where a Frankstown man previously sent two other packages, each containing $4,000 in cash.

The Frankstown Township man sent the cash because he thought he was helping his grandson after a caller posing as an attorney claimed the money was needed for bail.

“They try to get you to panic in the moment,” said Trooper Christopher Fox, spokesman for Pennsylvania State Police Troop G in Hollidaysburg. Fox said that knee-jerk reaction to help a loved one leads to people sending money and gift cards to fraudsters.

“And once they hang up the phone, they realize they made a mistake,” Fox said.

These types of scams are not new, and what makes the case in Frankstown Township most unique was the fact that police were able to arrest and charge someone.

In October, state police reported an Everett man was scammed into buying $1,200 in Amazon gift cards and sending the card numbers to a person he was chatting with on Google chat. In May, a Woodbury Township woman trying to get a bank loan was contacted by someone claiming to be from a loan company saying she had been given too much money and she needed to pay the excess a amount back in Google Play gift cards worth $1,390.

In 2016, a Huntingdon County woman was scammed out of $500 when someone called her to say her husband owed court costs and he would go to jail if the debt wasn’t paid, state police reported.

In 2012, a Bedford County woman was fleeced of $20,000 through an internet chat site over the course of just a few days, and in 2014, state police reported a Hollidaysburg woman lost $500,000 to a caller with a Caribbean or Jamaican accent who called her up to 20 times a day to have her send money over the course of four years under the pretense she had won a prize.

Fox said a lot of the scams are perpetrated by people outside the U.S., which makes it almost impossible to follow the trail and make arrests. When scammers are working from inside the country, police have more success in making a case.

Still, the best way to get fraudsters is not to fall for their scams. “A little bit of common sense goes a long way,” said Jeff Sunseri, assistant professor of Information technology at Mount Aloysius College. “If it sounds too good to be true, it probably is.”

Sunseri will be one of several presenters at an upcoming free event sponsored by the Eastern Cambria Chamber of Commerce titled “Identifying, understanding and preventing scams” to be held the evening of Feb. 12 at the Cresson American Legion.

Along with Sunseri, postal inspectors will be there to talk about the U.S. Postal Service’s efforts to protect customers and provide information about how they can protect themselves from scams, said Altoona Postmaster Michael Olsavski.

He said it’s important that customers have the knowledge about the dangers of scammers and he hopes the public will turn out for the event.

“Somewhere along the line, these crimes intersect with the postal service,” Olsavski said.

Along with postal inspectors, the U.S. Postal Service also employs a cybercrimes unit to tackle the issue of fraud, he pointed out.

Attackers will aggressively go after people’s information, and to do that, they will go to ever increasing lengths to learn as much as they can about you — where you live, your family and friends, your hometown, where you’ve worked and even what you’ve recently bought online.

Olsavski said there are things people can do to protect themselves, including changing passwords and using anti-virus software.

He recommends people change their passwords frequently and avoid recycling passwords or using the same username or password across multiple sites or applications.

Sunseri pointed out hackers are now using a technique called “password stuffing” where they plug in compromised usernames and passwords to an app and the program will automatically check to see if they work at a whole list of popular sites such as Amazon and Hulu.

“Change passwords frequently and use at least a different password for every site,” he said. There are also legitimate apps that can help people manage their usernames and passwords given the number of different accounts some people have. That often leads to using the same ones over and over again.

Keeping up with the latest online threats can be like “drinking from a fire hose,” Sunseri noted, but by keeping an eye on tech news, consumers can help themselves stay up to date on the latest threats.

Whether online or on the phone, scaring people is one of the most common ways scammers do this, both online and on the phone through calls and texts.

“If someone tells you they are going to cut off their water or their power, that can be scary,” Sunseri said of a common ploy used to put people into a panic so they feel pressured to act. Sunseri said one way to separate bogus communications with real ones is to get some information and then call the company to find out if it’s legitimate.

“Whenever you get a cold call or email out of the blue you weren’t expecting, call that company back to verify,” Sunseri said.

With some organizations, the way a person is contacted can immediately tell a person whether it’s a scam or not.

“The IRS will not contact you by email or phone,” Sunseri said.

Although victims of scams are often embarrassed and hesitant to talk about it or even report it, the more information there is out there about these schemes and the more people talk about it, the safer consumers will be, noted Katrina Boyer, investor education coordinator with the Pennsylvania Department of Banking and Finance.

“Even the most educated and financially sophisticated become victims,” Boyer said, adding that is why the department sees its outreach programs as imperative in combating fraud and scams.

“If we talk about scams and frauds as part of the culture, we’re less likely to fall victim to it,” she said.

Most recently, senior citizens in Pennsylvania have been hit with the Social Security scam, Boyer said.

In that scam, a caller tells someone their benefits will be suspended if they don’t pay a fee.

Boyer said a good rule of thumb is to never give out information if you didn’t initiate the call. Also, if it’s a number you don’t recognize or is blocked, don’t answer it. Legitimate callers will leave a message while scammers usually don’t.

The department has seen a rise in counterfeit check crimes where someone is sent a bogus check and then asked to return a portion of it in return for a prize. Boyer said while it’s easy to laugh and wonder who could fall for such schemes, the consequences for victims are serious because by endorsing a check, a person is guaranteeing the check is good and signifying they will be responsible for that amount of money.

This time of year may be the time of love with Valentine’s Day right around the corner, but it’s also a time when romance scams become a huge problem, Boyer said. Scammers prey on lonely people this time of year, and it makes them vulnerable to getting conned out of money for the sake of love.

Fox pointed out the IRS scams often involve sending gift cards or cash to an address. The sending of gift cards, he said, is a certain tip-off that something is a scam.

“Before you make any type of decision about sending money, contact us,” Fox said.

Often, calls like the ones that caused the Frankstown man to send thousands of dollars target older people, Altoona police Sgt. Matthew Plummer said, adding that the grandmother of one the department’s officers was a victim of that scam.

Plummer said the department receives one to two complaints each day and about as many each month who tell police they sent money to a scammer.

He said scammers sometimes use the police as a cover, claiming to be from the Fraternal Order of Police.

“We never request donations over the telephone, whatsoever,” Plummer said.

Education and outreach staff from the Department of Banking and Securities will be meeting with groups of senior citizens, veterans, service providers and the public this month to promote financial capability as part of Gov. Tom Wolf’s Consumer Financial Protection Initiative. Sessions in the area are:

Feb. 13 at the Philipsburg Senior Center in Philipsburg, the state Department of Banking and Securities will host “Fraud Bingo” for seniors.

Group coordinators interested in department staff presenting a program to their organization can email informed@pa.gov. For questions about financial scams, call 1-800-PA BANKS.

To file a scam complaint, visit the Pennsylvania Office of the Attorney General’s website, call the Bureau of Consumer Protection at 1-800-441-2555 or send an email to

‘Be grateful for your blessings’

Blair County and Central Pennsylvania businesses can now apply for a grant to help them recover from the effects of ...

Amtran GM gets OK to act as necessary

Amtran is allowing General Manager Eric Wolf to act as he deems necessary in response to the coronavirus crisis, ...

Going out of the way to save the TP

How’s everybody doing right now? Hang in there. Try to find some humor, even in the smallest and most mundane, of ...

Three juveniles have been charged with vandalizing athletic fields in northern Blair County in early ...