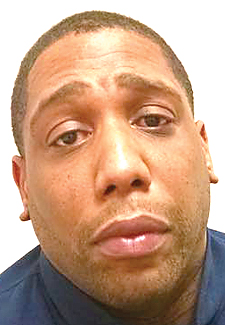 HOLLIDAYSBURG — A 43-year-old Johnstown man has been sentenced to 21.5 to 43 years in jail for his role at the top of a drug-trafficking organization that sold a deadly form of heroin in Blair and Cambria counties in 2016 and early 2017.

Judge Daniel J. Milliron imposed sentences Tuesday on Damon “Fat Cat” Devine who was convicted in December of multiple drug-trafficking offenses, then convicted in January of assaulting a fellow defendant at a district magistrate’s office.

Milliron said he based the sentence on Devine’s convictions, the amount of heroin and cocaine sold, the complexity and size of the organization and its threat to the community.

Devine, who maintains that the criminal charges include false allegations, is expected to pursue an appeal.

Senior Deputy Attorney General Dave Gorman, who asked the judge for a sentence of 35 to 70 years, acknowledged the sentence of 21.5 to 43 years as “significant” and recognition that Devine was in charge of the organization.

“I wanted a longer sentence,” Gorman said, “because if and when he gets out of jail, he’s going to return to dealing drugs.”

Information offered to Milliron indicated that Devine, who grew up in the Philadelphia area, dropped out of school at 14 years old and started selling drugs, which became his career.

Devine acknowledged Tuesday that he has prior drug offenses for which he took responsibility.

“When the commonwealth found out I wasn’t the large distributor they made me out to be, their story changed,” Devine said.

Supervising Narcotics Agent Thomas Brandt of the state Attorney General’s Office said Tuesday in court that this case had plenty of evidence to back up the criminal charges.

Brandt referenced the Aug. 15, 2016, vehicle crash just off the Pennsylvania Turnpike in Montgomery County in which Devine was a passenger in a BMW driven by Jabu Robinson of Philadelphia. The crash led to the seizure of 3,750 bags of heroin and 127 grams of cocaine.

“Those drugs were destined for Cambria County and Blair County,” Brandt said. “We actually caught them (Devine and Robinson) with the drugs in the trunk. That’s about as good as it gets.”

When Devine questioned what evidence exists to indicate that the drugs were destined for Cambria and Blair counties, Brandt pointed to witness testimony.

Devine’s organization involved about 15 associates including those who testified at his December trial about the amount of heroin and cocaine they were selling, which included heroin that was packaged inside bags with a dragon stamp.

It was the sale of that heroin, leading to overdoses and deaths, which prompted investigators to start looking for the source and ask for a grand jury to aid their investigation.

That investigation culminated on Feb. 13, 2017, outside the Motel 6 in Altoona, where Devine and then-girlfriend, Jasmine McGowan, showed up to deliver $7,000 worth of heroin to Richard Govier, who had been selling Dragon heroin in Altoona.

McGowan, after being taken into custody, advised police where they would find more than 10,000 packets of heroin in the Johnstown residence that she and Devine shared.

“That is an extraordinary amount of heroin,” Moser told Milliron.