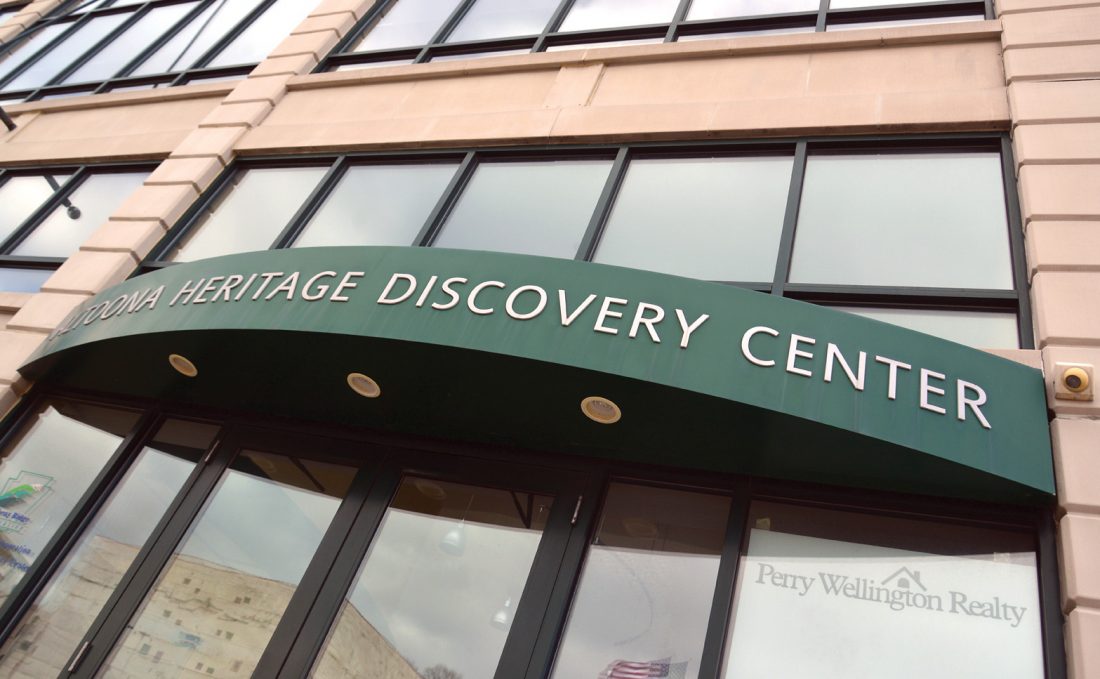 Mirror photo by Patrick Waksmunski / The Altoona Heritage Discovery Center, located at 1421 12th Ave. in Altoona, is up for sale. The center, owned by the Allegheny Ridge Corp., expected that the first-floor condominium would be purchased and then donated to Penn State Altoona, but the sale fell through.

The downtown Altoona Heritage Discovery Center has closed and is up for sale.

Owned by the Allegheny Ridge Corp., the first-floor condominium in the three-story section of the former Penn Furniture building was redeveloped two decades ago and has served as a venue for social events, after initial plans dissolved to use it as a museum to encourage heritage tourism.

The center stopped booking events more than a year ago, limiting itself to fulfillment of prior commitments in expectation that two members of a Penn State Altoona advisory board would buy the condo and donate it to the college — which occupies the rest of the building, including a five-story section, said Allegheny Ridge Executive Director Jane Sheffield.

But those expectations evaporated, possibly because the main campus of the university may have nixed the plans, Sheffield said.

Penn State Altoona never actually made an offer to buy the property, stated Rob Hippo, the college’s director of finance and business, in an email.

The appraised-value asking price is $950,000, according to the Perry Wellington Realty website.

Allegheny Ridge had a “gentleman’s agreement” with the potential buyers, then stopped scheduling events, after which the sides arrived at an agreeable price, according to Sheffield.

It seemed natural that Penn State Altoona would want the venue as a conference center in a building they otherwise occupied, she said.

“We thought we had it sold,” said Allegheny Ridge board President Randy Stager. “Then it fell apart.”

Allegheny Ridge agreed to sell the Discovery Center because operating the facility had begun to detract from the organization’s core mission, according to Sheffield.

That core mission is to help communities and businesses along the Pittsburgh-to-Harrisburg Main Line Canal Greenway — which traces the route of the former Pennsylvania Main Line Canal and Allegheny Portage Railroad — by developing heritage and recreation amenities and promoting tourism, according to Sheffield and Allegheny Ridge’s website.

For many years, the center operation had contributed to that core mission, Sheffield said.

Allegheny Ridge kept the venue’s prices low, maybe a third or even a fifth of what some others were charging, which kept the center from turning a profit, when considering expenses like staff time, maintenance, cleanup, utilities and taxes, Sheffield said.

But the operation allowed Allegheny Ridge to employ a staffer who, in addition to venue bookings and maintenance, contributed to the Greenway effort by manning corporation headquarters at the center and by handling fiscal matters and media relations, Sheffield said.

By maintaining ownership of the space, Allegheny Ridge could host its own events there and enabled it to publicize its work through a Greenway map in the foyer, she said.

Several years ago, the organization was forced to lay off the employee who’d run the center, despite her excellent work, in order to continue paying staffers working directly on Greenway projects, Sheffield said.

Sheffield had to take responsibility for event bookings, which wore on her, according to Sheffield and Stager.

So the organization was receptive when the Penn State Advisory Board representatives presented their proposal.

Nonprofit Allegheny Ridge acquired both the three- and five-story sections in 1996 from the BLD Partnership, comprising businessmen Ted Brant, Maury Lawruk and Don Devorris, but leased back the five-story portion for a nominal fee to BLD — eventually receiving a percentage when the five-story was sold, Sheffield said.

Allegheny Ridge cleaned up the three-story portion with volunteers, obtained a $2.5 million state Redevelopment Assistance Capital Program grant, and, in partnership with New York developer John Radionoff and the local Fiore family, who provided the match for the grant, replaced the three-story’s roof, rehabilitated its facade, further cleaned the upper floors and renovated the first floor and mezzanine to create the Heritage Discovery space — while replacing the roof and stabilizing the five-story section, according to Sheffield.

Before the project, the roof of the Penn Furniture building had been ruined, but the structure survived due to stout construction that included reinforced concrete floors, Sheffield said.

Still, enough damage had occurred that, under different circumstances, might have led to the building’s demolition, she said.

Preventing that was “absolutely” one of Allegheny Ridge’s key accomplishments, she said.

Allegheny Ridge hadn’t planned on owning or operating the space when the idea for establishing a tourism center in the three-story surfaced, she said.

Rather, it intended simply to “facilitate” its purchase and development as a visitor’s center by the Allegheny Mountain Convention and Visitors Bureau, she said.

That changed, however, when the opportunity arose for the visitors bureau to build the Blair County Convention Center, Sheffield said.

Allegheny Ridge was left to develop what became the Discovery Center on its own.

“We had to do it by default,” she stated.

Allegheny Ridge initially considered turning the three-story into a museum, with exhibits on the region’s industrial history and emphasis on transportation — something like the Heritage Discovery Center in Johnstown, which houses exhibits and is a venue for events, Sheffield said.

But it became clear that creating a museum in the three-story section wasn’t viable, given the cost of exhibit installation and maintenance, questions about the willingness of visitors to accept an entry fee, a scarcity of exhibit-creation grants and potential competition for local ticket dollars.

Furthermore, Allegheny Ridge shied away from the fundraising necessary to match Johnstown’s facility, which was supported by the Johnstown Area Heritage Association’s “robust membership and donor pool,” she said.

Allegheny Ridge, after having had success obtaining federal and state grants, had committed not to compete with nonprofits for donor money, Sheffield said.

So, as an alternative use, the center started off as a venue for weddings and other events.

She doesn’t regret it, Sheffield said.

In addition to the many years of indirect support the operation provided the Greenway efforts, it also provided services to the community by allowing a variety of groups to hold events there at reasonable cost, while providing work for wedding planners, bartenders, caterers, beer distributors and equipment suppliers, she said.

The three-story and the five-story sections began as independent buildings almost 100 years ago, became one through internal connections when Penn Furniture took over several years later, became separate again through construction of interior walls when the Heritage Discovery Center was established at the beginning of this century, and were reconnected by demolition of those walls when Penn State took control of the five-story portion around 2010, according to Patrick Miller, executive vice president of the Altoona Blair County Development Corp., which leases the entire complex — minus the Discovery Center condo — to the college.

Allegheny Ridge is disappointed about the dissolution of the proposed transfer of the Discovery Center condo to the college, but the effort of the advisory board members to acquire and donate it was “well-intentioned,” Sheffield said.

It “will be a good investment for somebody,” Stager said.