Interest in languages leads native to being Moscow reporter 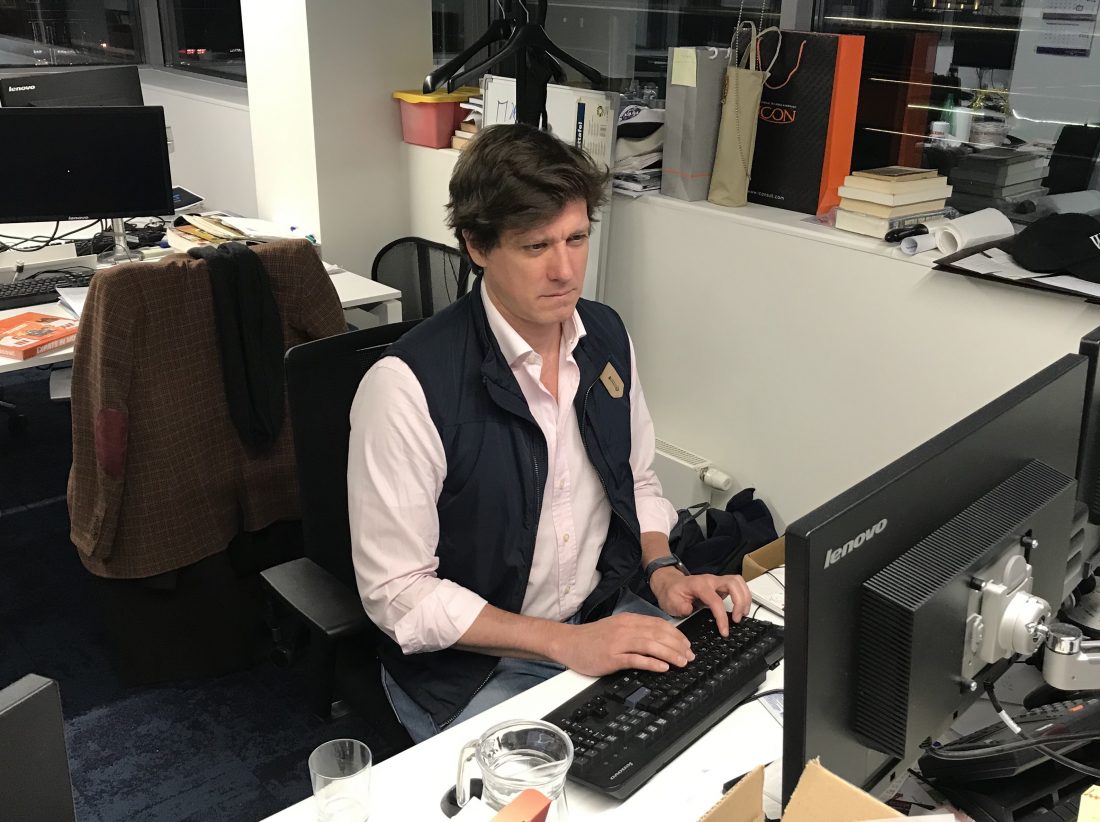 “I was fascinated by languages. I never thought of journalism at all. My dad was a psychologist at the VA. My mom worked at Penn Mont Academy. They both had a background in psychology; it was interesting but not something I wanted to go into,” Grove said.

Today, Grove, 39, a 1998 graduate of Altoona Area High School, lives in Moscow, Russia, and works as a reporter for the Wall Street Journal, one of the largest newspapers in the United States known for its award-winning news coverage. It has won 37 Pulitzer Prizes.

Grove has been with the Journal since 2015, and today covers the former Soviet space of Russia, the Caucasus, Central Asia, Ukraine and Belarus.

He has been spending a lot of time on the Ukraine side of the impeachment proceedings.

“I don’t have President Donald Trump and Ukraine President Volodymyr Zelensky, but I am looking into the company (Burisma) where Hunter Biden was employed,” Grove said. “The impeachment process has been overwhelming; there is a lot going on with moving pieces. It has been difficult in Ukraine to meet the right people and get independent and grounded sources with what is happening. It has been exhilarating; I am happy to be part of it.”

Grove, the son of John and Judy Grove, enjoys what he is doing.

“I really love what I do. I love the Journal; it doesn’t take sides. I consider it to be the most balanced newspaper. I am proud of what we do. It is sad to see people call out other news organizations with a right or left slant. I like to see what the facts are and where they lead. I am not trying to prove a point of view,” Grove said.

Grove grew up in the Dutch Hill area and went to Pleasant Valley Elementary School and then Roosevelt Junior High.

After graduating from Altoona Area High School, he went to Washington & Lee University, where he graduated in 2002 with degrees in both Russian and German.

He said he hadn’t thought about a career in journalism until his Russian professor Anna Brodsky planted the seed.

“I always picked up languages pretty easily. I liked to write and talk to people. I was a curious person. It all made sense. She said why don’t you give it a try. She was one of the most interesting people I met and valued what she had to say,” Grove said.

“He certainly was one of the three best students I ever taught in my teaching career. I reach for superlatives when talking about Tom; he was the most intellectually curious, adventuresome and certainly was the brightest,” Brodsky said.

Brodsky said she spent some time with Grove in Russia

“He wasn’t merely focused, he was broadly focused. He was interested in learning the language, the history and the culture. He was also a fun person to be with. He was super popular with his fellow students.” Brodsky said.

In 2002, Grove won a Watson Fellowship, which is like a traveling fellowship.

“I put together a project to study music in Turkey, Georgia, Azerbaijan and Uzbekistan. I had my first taste of journalism doing a weekly radio program in Tashkent, Uzbekistan,” Grove said.

The fellowship was important to his career.

“I got to live independently abroad for a year, found out what it was like. For me, at 22, I wanted to have as many adventures as possible and meet as many people as possible,” Grove said. “It was the year abroad that made me realize how interesting other parts of the world were. After six months in Istanbul, it was so much fun and I wanted to do more of this. I could navigate my way around in a foreign country.”

Grove came back to the United States in 2003 and was accepted into Columbia University’s journalism program.

“At Columbia you had a yearlong project. I was given a neighborhood, that was my beat. That was exhilarating, living in New York for the first time. I was in my 20s, it was a lot of fun, but it was a really demanding program. You came away with a lot,” Grove said.

He graduated from Columbia in 2005 and went to Turkey to take a job with the Toronto Globe and Mail. He then joined the Reuters News Agency in 2006 in Istanbul where he focused on finance stories.

“I didn’t have a strong background in finance; finance was their bread and butter at the time. Reuters helped me get a better understanding about how money works. I did a market report every day. I wrote about business and finance, but politics was more interesting. I grew into that,” Grove said.

In 2014 he started to cover the war in Ukraine.

“I did a number of stories that got people’s attention. I was invited to interview at the Journal and asked to join. I jumped at that chance,” Grove said.

He said he enjoys living in Moscow.

“It is absolutely wonderful. Russia is difficult to understand for a lot of people. If you understand the language and the culture it is an incredibly nice place in terms of culture. The people are lovely. I am a novelty for them, there are not a lot of Americans there. I feel like I am representing the best of America,” Grove said.

As an American journalist, Grove said he assumes he is being watched.

“I assume all of my communications are being monitored. I have had some funny things happen to me, it is clear I am a subject of interest to them. You do your best, if you are open and fair, the U.S. Embassy has our back. Russian journalists have a more difficult time being critical when it is due,” Grove said.

“You have to constantly question and challenge yourself. You have to be fair to the people you are talking to. It is a hard profession. You have to do your best and love what you do. If you have the right stuff and willingness to do what it takes, it takes a lot of work. I’ve seen the profession eat people and spit them out,” Grove said.

“I was lucky my grandparents lived across the street, going out and playing with the kids in the neighborhood was great. I ran cross country in high school, that was fantastic. My teachers were great,” Grove said. “Stony Point in Sinking Valley was a fantastic place to hike, I would go there and hike with my friend Dennis Dombrowski.”

“We used to hike, once to the top. Our eagerness sometimes outweighed our ability to be prepared. As teens we would go exploring, take drives not knowing where we would end up. He was curious, he wanted to see things he hadn’t seen before,” said Dombrowski, now a psychiatrist in State College.

Grove said he misses his family and friends.

“My parents were the single one force in my life to do the best I can in everything I do. I miss going to the Amish markets and auctions, I think that was the coolest thing,” Grove said.

He said he tries to get back home once or twice a year.

Mirante was the first person to tell him he was good at writing — “that meant a lot to me,” Grove said.

“He was very serious, very curious about learning. We had a couple of minutes each day on current events, and Tom was my star pupil. He read the paper at a young age and was tuned in to what was going on locally as well as worldwide.” Houseman said. “He was a bright conscientious young man who made you feel good about being a teacher. You feel you have accomplished something when you see a young man or woman do well and enjoy learning. He was a first-class young man. I knew his parents; he had a good moral compass from home.”

“At Christmastime he drew a Centaur — it was a pencil sketch which was so well done for a third grader. I still have it today. His mother said he had stayed up late at night, he drew one for every child in the class. He was so thoughtful and caring; he was that kind of student. He was a wonderful child. To do something with Greek mythology at that age was so advanced,” Sicola said. “He was an excellent student. Sometimes students that are so far advanced are aloof, but he was happy every day with a smile on his face.”

Grove said he hopes to stay with the Journal, but hopes to some day move back to the United States.

“I would like to stay with the Journal. It is the best newspaper out there and I am proud to work for it,” Grove said. “I want to be closer to mom and dad, I would like to do that sooner rather than later.”

Quote: “People get the picture of Russia as an authoritarian state. The people are very free thinkers and curious about the world.”