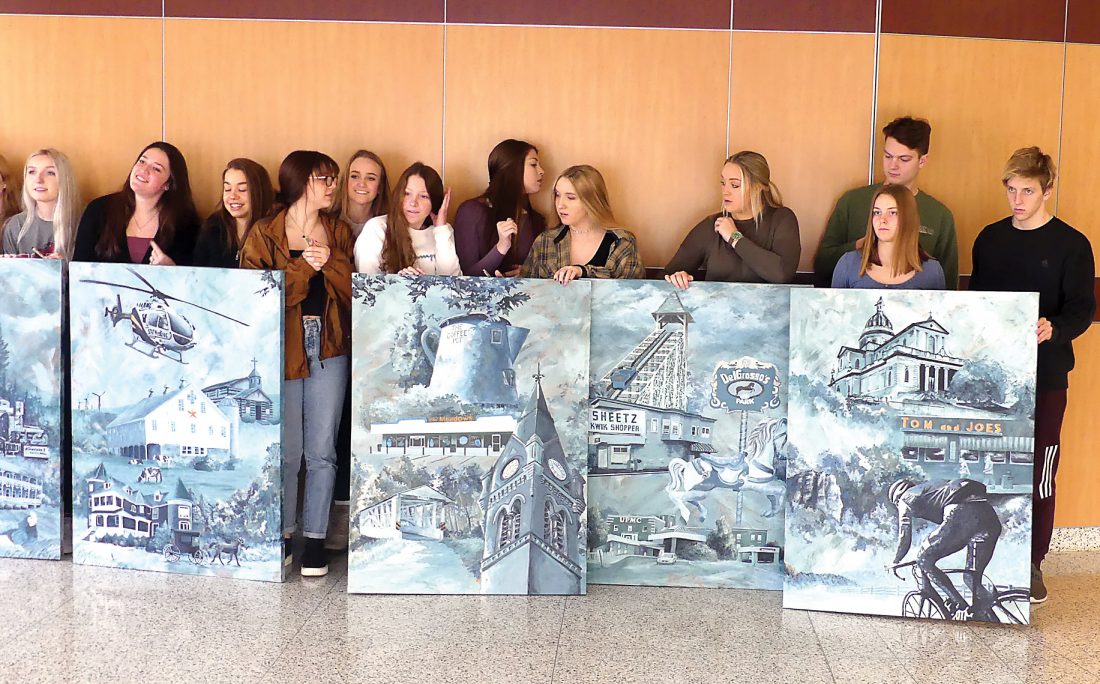 Mirror photo by Russ O’Reilly Four of the six panels of a mural created by Hollidaysburg Area Senior High School art students are shown Thursday as students get ready to move the pieces. The completed mural will be hung at UPMC Altoona.

A group of 20 students worked on a mural over the past six weeks that will be hung in the hospital’s cafeteria. It was an overwhelming project, students said.

This week the students completed six 36-inch by 48-inch paintings that combine to form an 18-foot by 4-foot mural depicting area landmarks, including DelGrosso’s Park in Tipton and the Coffee Pot in Bedford.

Catherine Anderson said she is proud of the final work she helped create for the many visitors to the hospital.

“I’m really excited to see it all finished and up so everyone can enjoy it,” she said.

The art is scheduled to be hung in the cafeteria at UPMC Altoona in late winter or early spring, with a ribbon cutting slated for the spring.

“This will be in public. A lot of people will see it. We want to represent the Hollidaysburg art department well,” said Zoie Romagna.

With an idea for brightening up its hospital walls, UPMC contacted the Artist in Residency program sponsored by the Pennsylvania Council of the Arts in partnership with the Southern Alleghenies Museum of Art. UPMC wanted students to be involved.

“I have done a hundred residencies, and this was one of the more challenging ones. I could not ask for a better group of students and teacher to work with,” Magee said.

Magee said the hospital has plans for student art all over its campus. Hollidaysburg Area is one of the first schools to produce art for that purpose.

Watt complimented her students’ ability to work together.

“I think it was the perfect group of students to work in a collaborative setting,” Watt said. “It was challenging, but the result was just what we envisioned.”

The task was to paint landmarks from areas serviced by UPMC. Magee photographed the landmarks or found historical photos. Students decided the composition of all six panels and made small sketches that they enlarged and transferred to scale on canvas by using their math skills, Watt said.

The students worked with a neutral color scheme and a lot of blue, as UPMC wanted the colors to achieve a calming effect.

Hollidaysburg Area student James Roberts said it was rewarding to be part of a large-scale project and learn about the area where he lives in the process.

“I didn’t know half of these buildings and things that we painted,” he said. “I learned so much about our area.”