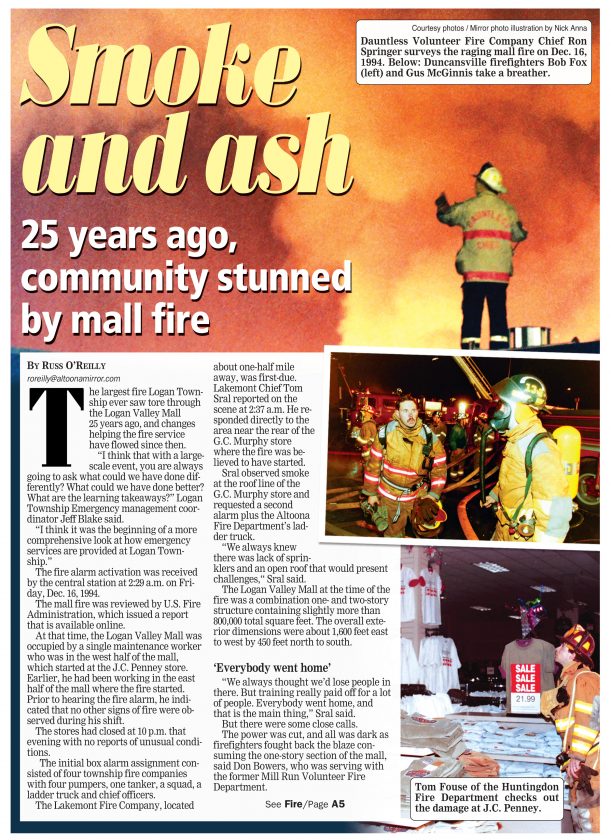 The largest fire Logan Township ever saw tore through the Logan Valley Mall 25 years ago, and changes helping the fire service have flowed since then.

“I think it was the beginning of a more comprehensive look at how emergency services are provided at Logan Township.”

The mall fire was reviewed by U.S. Fire Administration, which issued a report that is available online.

At that time, the Logan Valley Mall was occupied by a single maintenance worker who was in the west half of the mall, which started at the J.C. Penney store. Earlier, he had been working in the east half of the mall where the fire started. Prior to hearing the fire alarm, he indicated that no other signs of fire were observed during his shift.

The stores had closed at 10 p.m. that evening with no reports of unusual conditions.

The Lakemont Fire Company, located about one-half mile away, was first-due. Lakemont Chief Tom Sral reported on the scene at 2:37 a.m. He responded directly to the area near the rear of the G.C. Murphy store where the fire was believed to have started.

Sral observed smoke at the roof line of the G.C. Murphy store and requested a second alarm plus the Altoona Fire Department’s ladder truck.

“We always knew there was lack of sprinklers and an open roof that would present challenges,” Sral said.

The Logan Valley Mall at the time of the fire was a combination one- and two-story structure containing slightly more than 800,000 total square feet. The overall exterior dimensions were about 1,600 feet east to west by 450 feet north to south.

“We always thought we’d lose people in there. But training really paid off for a lot of people. Everybody went home, and that is the main thing,” Sral said.

But there were some close calls.

The power was cut, and all was dark as firefighters fought back the blaze consuming the one-story section of the mall, said Don Bowers, who was serving with the former Mill Run Volunteer Fire

“It was like going in a room with your eyes closed and spinning around,” Bowers said.

“And it sounded like something was racing across the roof. It was like a raceway,” he added.

A roof fire spread above the firefighters, fueled by melted and vaporized asphalt from the adhesive above the roof’s metal deck and under the roof insulation.

“Myself and a couple other guys couldn’t follow our hoses back the way we came. The roof fell where our hoses were. That was the only time I started to panic a bit,” Bowers said.

Their regulator bells started ringing, which meant they were running low on oxygen.

“We were searching along the wall for a way out, low on air,” he said.

They found a broken window through which they exited.

After a rest, Bowers climbed to the mall’s roof and looked in.

“It was like you were looking down into hell,” he said. “We didn’t save lives but did save some livelihoods because we saved it from burning down,” Bowers said.

It was traumatic for many who made their living at the mall. People jumped out of bed when they received calls that the mall was on fire.

“It was a real nightmare,” said Mike Kranich Jr., who was only in college at the time his parents called him and said the mall where one of the family jewelry stores was located was on fire.

“It was a disaster. The whole roof caved in. In the jewelry business, there are so many issues because you have people’s repairs in the vaults and people’s Christmas orders. Thank God we had two stores in town. After a few days, firefighters let us in to get everyone’s goods out, but a lot of things were damaged, even down to watch straps and crystal giftware that was smoke-damaged.”

Barber John Burk was quoted in a story about his career that the fire was the most traumatic thing in his career. “It was a nightmare.” He went to the mall to see fire trucks everywhere. The blaze damaged his barber shop.

When Sears closed last year, retired Sears store manager Lee Helmer told the Mirror he remembered how the Sears family came together immediately during the 1994 fire. “I got a call about the fire. I couldn’t believe it,” he said. “I went into the store and the electricity was still on. I came out the back door about an hour later and 30 or 40 Sears employees had arrived and were standing outside.”

It took 359 firefighters from 59 companies located in five Pennsylvania counties to fight the fire that night. Some companies traveled more than 30 miles to reach the fire. All but one of the fire companies were volunteer.

If a fire of that magnitude happened again, former Kittaning Trail Volunteer Fire chief and current director of AMED Gary Watters would be concerned.

“There would be a great concern about manpower,” Watters said. “I think back then, there were many fire companies with good numbers of volunteers. Now, you have about the same number of companies but a lot less volunteers bringing a lot less to the fire scene.”

“Manpower has dropped over the years. Trying to get volunteers to put in time is very hard. People don’t have the time because of their lifestyles. As a society, we are a lot more mobile now. We have a lot more things to do. People move in and out of a town quick, and families are smaller now, so we don’t have families sending many recruits.”

Watters coordinated crews around the front of the mall where the parking garage is now. He led firefighters to run several large master stream hoses inside the building through entrances to Sears and Penney’s to contain the fire and prevent it from getting to those two anchor stores.

“It was very labor intensive, which is again why we needed help from outside areas,” Watters said.

Deploying master stream nozzles inside the building required manpower. The hoses were 4 inches in diameter and 100-foot sections of the hose weighed a lot, maybe 100 pounds per section, he said.

Rebuilding the mall after the 1994 fire took almost two years, during which time some merchants moved to the newer section while others opened in other locations or went out of business.

And stores’ open grill security separations allowed the free passage of smoke and heat into stores from the common area.

In addition, automatic fire detection has no effect on fire growth and does not prevent large fires from occurring. The area of the complex where the fire is believed to have started had heat detectors but not sprinklers.

The fire also forged a stronger working relationship between Logan Township supervisors and their volunteer firefighters.

It led to the creation of a Logan Township citizens’ committee as well as a fire association in the mid-’90s to prepare fire services for the future; it preceded overwhelming public support for a fire tax increase in 2005, and it became the backdrop of how resources are spent through the volunteer firefighter relief association.

“The fire tax and adjustments to those taxes, all of that groundwork set the stage for the really good equipment we have today,” Blake said.

Once at odds over the purchase of new equipment, the township supervisors and firefighters seemed to draw together after the 1994 Logan Valley Mall fire.

Frank Meloy served on the citizens advisory committee and later the fire association when he was elected supervisor in 1996.

There had been debate between supervisors and firefighters about a ladder truck.

“When the mall fire came along, it brought the point home real quick that we needed a ladder truck,” Meloy said.

It wasn’t only residential use but for businesses with taller buildings.

“They figured it would be helpful with residential fires because many firefighters would risk injury climbing ladders,” Meloy said. “In those days, there were seven volunteer companies in the township with their own territory and fundraising to upgrade equipment.”

Meloy said a two-year study from the citizens committee outlined what companies needed to do before they consolidated to five. At the top of the list, they had to learn how to cooperate, Meloy said.

The Logan Valley Mall fire was the defining day that showed the value of cooperation among departments, Blake said.

Blake is the president of the relief association that supplements funding for all five departments.

“What you see now is that a lot of things have evolved,” Blake said. “One of the great successes we’ve achieved in Logan involves the Logan Township Volunteer Fireman’s Relief Association — another funding source for fire service in Logan Township.”

The relief association is a charitable organization formed according to state law to supplement volunteer fire service with public tax money.

“We updated equipment across the county. With the relief association came a more common approach to larger scale needs in the township — and when you look back at the Logan Valley Mall fire, it was the largest response ever. It was a record number of fire fighters to come out to an emergency.”

“It was an amazing statement by citizens in support of the volunteer fire service,” Blake said. “That’s who we owe a debt of gratitude to — the three pillars of our fire service; certainly, the volunteers who come in day in and day out and answer calls for service. Then, I think you look at the citizens, what they contribute through business and privately is thousands and thousands of dollars to community fund drives each year,” he said. “Generally speaking, those fund drives equate a third of everyone’s budget. Then you have to give kudos to the people in local government who are passionate about the township’s provision of taxes for the volunteer fire service,” Blake said.

“Without any one of those three pillars, the fire service will not only struggle but begin to spiral down.”