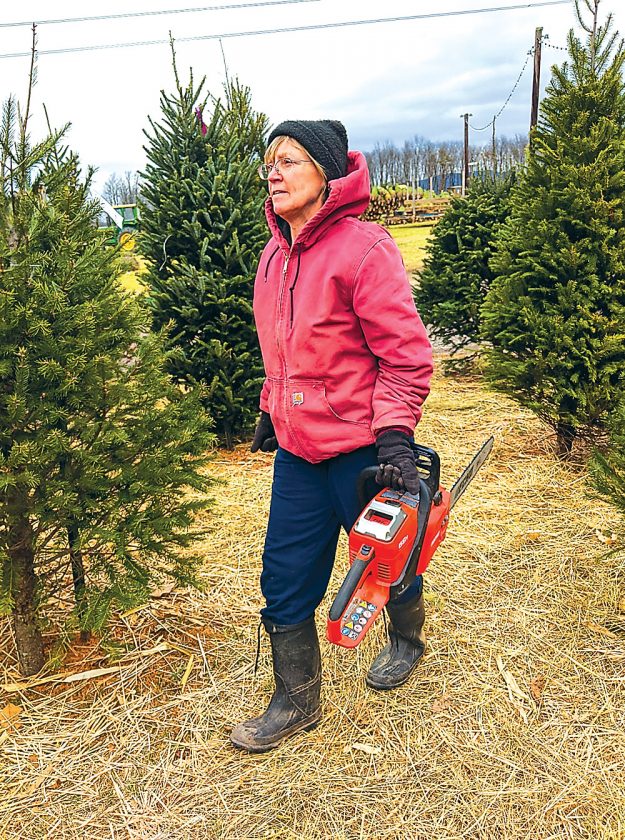 A customer walks through the freshly cut tree lot at JB Tree Farm on Route 22, near Alexandria. She came prepared in case she decided to cut her own tree. Courtesy photo

“Last year, real tree sales increased 20 percent and the supply held up fine,” NCTA spokesman Doug Hundley said. “The under-planting of seedling trees between 2005 and 2010 continues to hold down the current supply of harvest-size trees today. However, there has been a good balanced ‘supply to demand’ situation. Years of oversupply to demand had the Christmas tree family farms in a nonprofitable situation between 2000 and 2015.”

The Christmas tree industry has a long history in Pennsylvania, according to Michelle Keyser of the Pennsylvania Christmas Tree Growers Association.

Pennsylvania ranks third in the nation for the number of Christmas tree farms, with more than 1,400 in the commonwealth. The tree farms account for nearly 31,000 acres and produce about 1 million cut trees each year. For each tree cut, an average of three seedlings is planted. Pennsylvania ranks fourth in the United States in the number of Christmas trees cut each year, Keyser said.

Rick Koontz, owner of Sellers Tree Farm, Bedford, said he has a nice supply of trees, but his prices are up.

“I raised my trees a few dollars, but nothing significant,” he said. “I am looking at what others are charging to stay very competitive.

“We don’t have a shortage of Christmas trees. I have a nice supply,” Koontz said. “We had a shortage of seedlings. Finding good seedlings is still a problem. I have had a number of calls from people who are desperate for trees.”

JB Tree Farm on Route 22 near Alexandria also has a good supply of trees available.

“The wholesale market is a sellers market this year — we sold out extremely early,” co-owner Evelyn Bookhammer said. “For retail, we have a good supply and the quality is good.”

Bookhammer said conditions were good this year, leading to a good supply.

“It didn’t rain every day,” she said. “Our prices for pre-cut and cut your own are about the same as last year.”

Doug Banker, farm manager at Kuhn’s Tree Farm, Boalsburg, said he is a bit short this year and has had to raise prices.

“I am short, but I brought some in. I am very picky about my quality,” Banker said. “I drove all over the state to find trees at a good price and quality to make a few bucks.”

Banker said he thinks the shortage will continue for another four years.

“You can’t produce trees in a heartbeat. A lot of people lost a lot of trees (last year) because it was so wet,” he said. “I had to raise my prices.”

None of the area growers gave their prices during phone interviews.

Weather from the past few years had an impact on this year’s crop, said Commercial Horticulture Educator Thomas Ford of Blair County Penn State Cooperative Extension.

Wet weather from the past two years caused some growers to lose trees due to disease, Ford said.

Ford said the number of Christmas tree farms in Pennsylvania appears to be dropping, resulting in fewer Christmas trees available for the wholesale market.

Additional trees can be brought in from other states to meet local demand, Ford said, but overall, Pennsylvania Christmas tree supplies are tight and people looking to purchase cut trees should expect to pay more this year.

Fraser fir continues to be popular among area growers.

“Fraser fir is the top seller. They hold their needles well and are good for decorating. They have two-tone needles, blue on top and green on the bottom,” Banker said.

He said they used to have eight varieties, but now more people focus on Fraser.

“Douglas fir used to be the most popular,” Banker said, but “they are not flying off the shelves like the Fraser.”

Koontz agreed that Fraser firs are in high demand.

“Fraser fir and concolor fir are my top sellers. Concolor is quickly becoming as popular as Fraser,” Koontz said. “They are a lighter green and have a very distinct orange peel smell to them.”