The family of Landon Weaver takes in the new permanent memorial during a moment of silence after it was unveiled. Pictured above are (from left) brother, Larett Weaver; mom, Chris Weaver; dad, Eric Weaver; widow, Macy Weaver; mother-in-law, Rhonda Lintzinger; and nephew, Dominick Gottshall.

Slain Trooper London Weaver’s parents, Eric and Chris Weaver, and his brother, Larett, pose for a photo in front of a plaque that explains the trooper’s story. 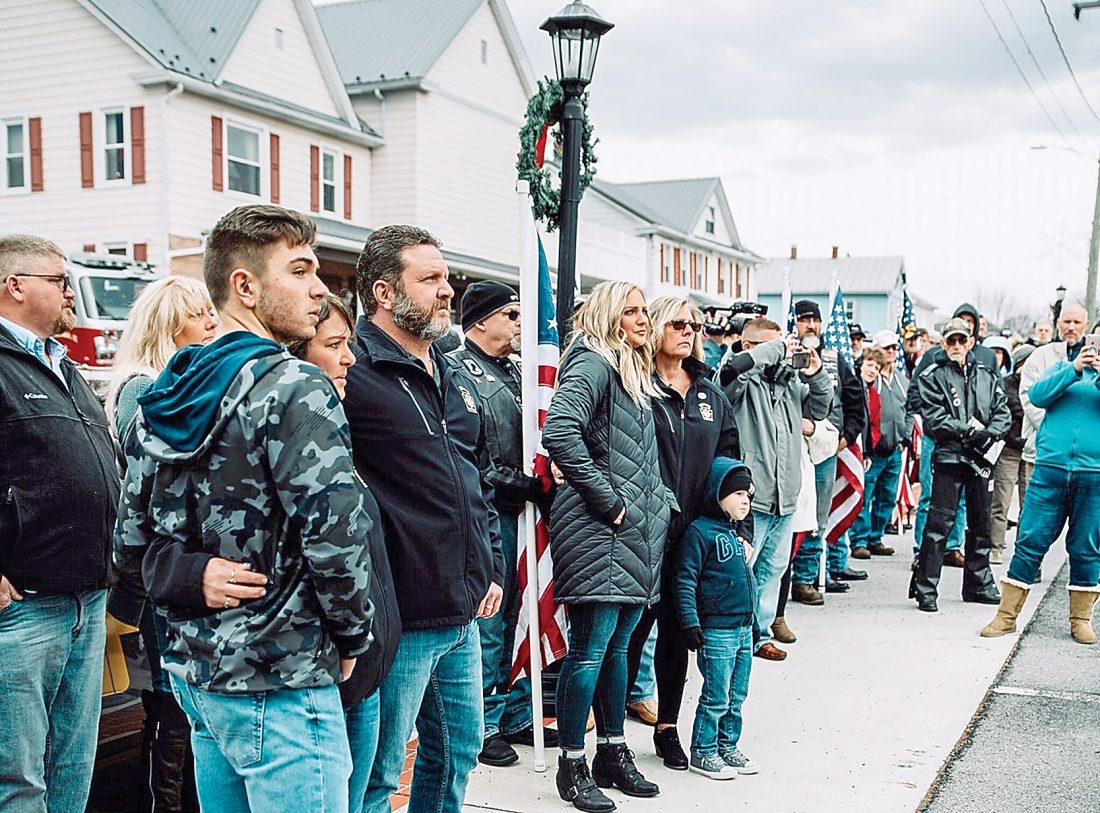 The family of Landon Weaver takes in the new permanent memorial during a moment of silence after it was unveiled. Pictured above are (from left) brother, Larett Weaver; mom, Chris Weaver; dad, Eric Weaver; widow, Macy Weaver; mother-in-law, Rhonda Lintzinger; and nephew, Dominick Gottshall.

MARTINSBURG — A pair of lights installed near the main intersection in Martinsburg now shine blue to honor a local hero.

Local officials dedicated those lights — and the parking lot where they are located — to State Trooper Landon Weaver during a public ceremony on Friday.

Weaver, a Martinsburg resident, was shot and killed three years ago while investigating a protection-from-abuse violation in Huntingdon County.

His death, at age 23, made him the 97th member of the Pennsylvania State Police to be killed in the line of duty. 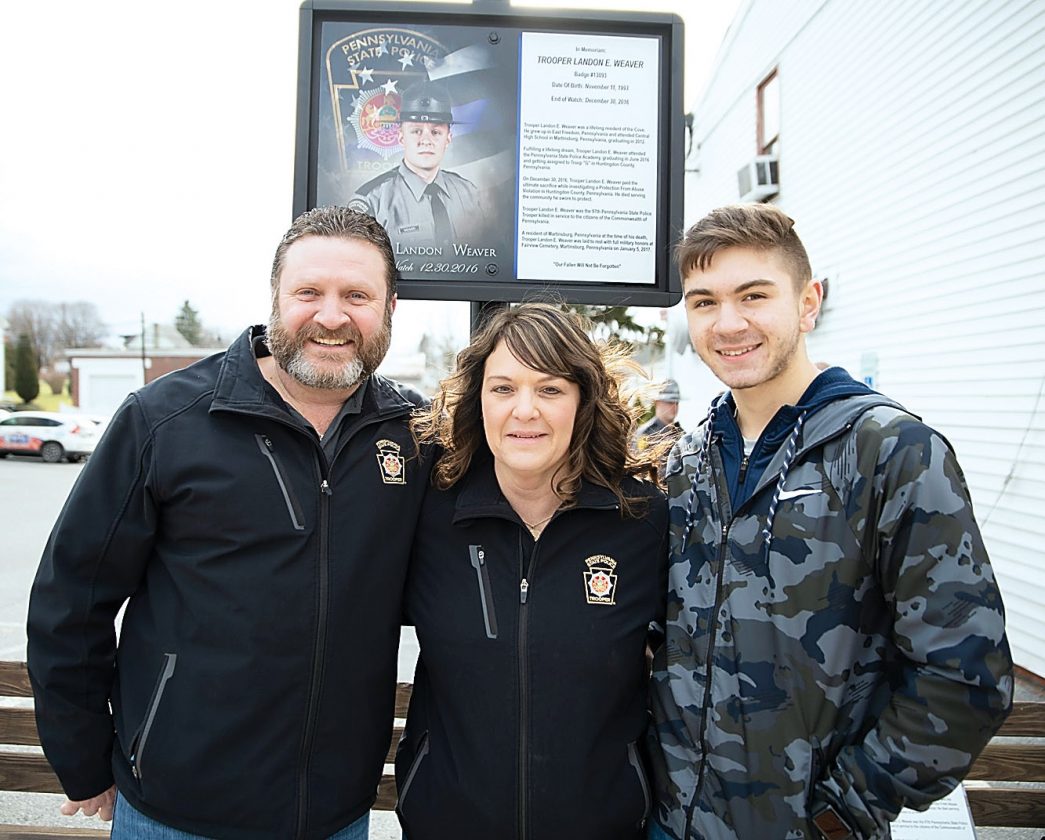 Slain Trooper London Weaver’s parents, Eric and Chris Weaver, and his brother, Larett, pose for a photo in front of a plaque that explains the trooper’s story.

The blue lights are solar powered and signify support for law enforcement, Brantner Sr. said. They were paid for by contributions to a memorial fund.

“It’s only fitting that we honor this local hero who paid the ultimate sacrifice,” said Brantner Sr., the town’s former police chief. “It’s imperative that we honor Trooper Weaver with a permanent memorial so that his name lives on.”

Each light post features a plaque that shows Weaver’s trooper photo and tells his story. Weaver, a 2012 Central High School graduate, is laid to rest in nearby Fairview Cemetery.

Brantner Sr. noted that he didn’t personally know Weaver but — as a former police officer — he feels a strong connection to his story.

“I think the memorial turned out beautifully and the family is really pleased,” he added.

The borough has plans to add new benches, landscaping and a flag pole to spruce up the area, he added.

Weaver’s family was on hand to receive copies of the plaque and honor their son, brother and husband. The moment was an emotional one as they accepted the honor from officials and unveiled the plaque.

His widow, Macy Weaver, now of Duncansville, said the experience brings back a lot of memories as the couple moved to Martinsburg as newlyweds.

“It’s a way for us to get together and honor the person we love and miss and the person we will never forget,” she said. “He is our hero … and he was my best friend.”

Weaver’s parents, Eric and Chris Weaver, helped design the plaque and made sure the details were accurate. They said this time of year is difficult for their family, which includes their younger son, Larett, who is a senior at CHS.

Over the years, they have participated in several memorial dedications to their son across Blair County. The location of the new Martinsburg memorial seems apropos, given his connections there, they said.

“It means a lot because this is where he lived and it will carry on his memory,” Chris Weaver said. “We won’t be here forever but these signs will be. It’s a bittersweet feeling, that’s for sure.”

The Weavers described the Martinsburg community as a special one and noted how strangers lined the streets to pay their respects to Weaver as his funeral procession drove through town.

“We want to thank (Brantner) for putting this together,” Eric Weaver said. “It’s been therapeutic for us.”

Rep. Jim Gregory, R-Hollidaysburg, attended the ceremony, along with representatives from the state police and local law enforcement units.

He said the memorial gives people visiting Martinsburg a chance to learn about a hero from the community that they might otherwise have never known.

“People who did not know Trooper Landon Weaver, who did not hear his name before, are now going to have the opportunity to see something that will make them ask ‘Who is Trooper Weaver?’ for a long, long time,” Gregory said.

He said the memorial is unique and makes sense for a community that takes pride in Weaver’s contribution to protecting the commonwealth.

“They can see this and ask about him and know what kind of person he was,” Gregory said. “When you come out, and see it in person, it’s incredibly impactful.”