Getting in the spirit 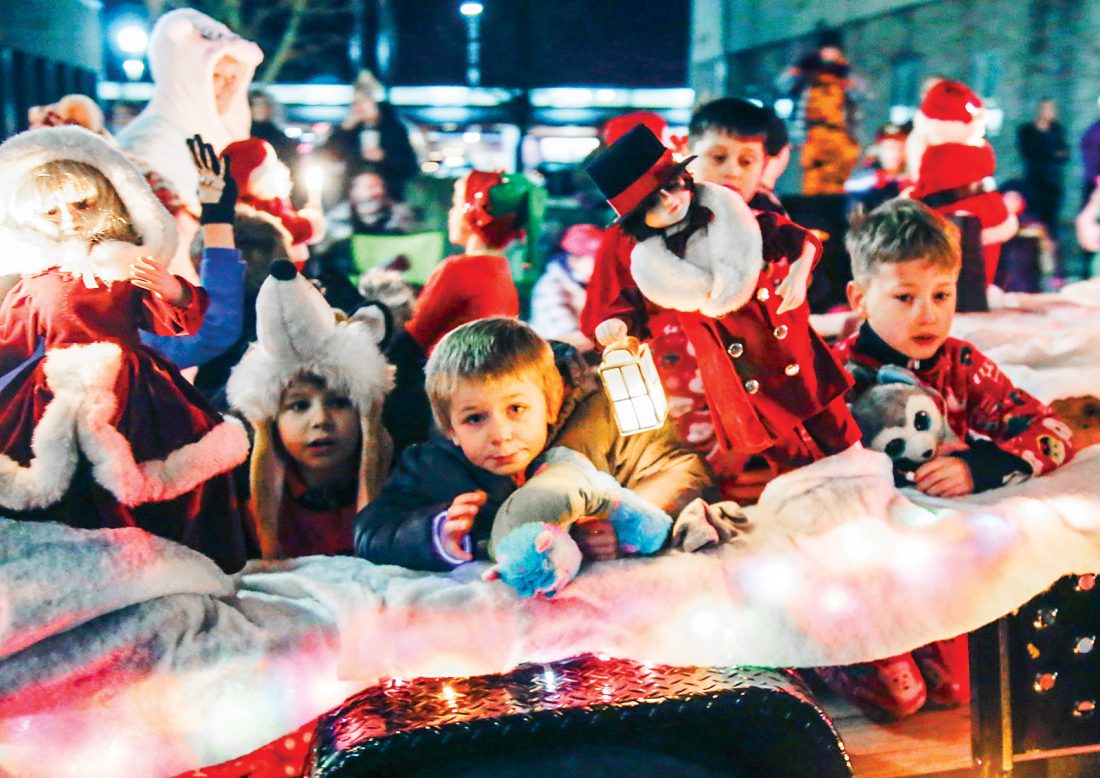 Nestled among holiday decorations on their float, Boy Scouts Troop No. 3015 members wave to spectators at the Spirit of Christmas parade on Thursday in downtown Altoona. Photo for the Mirror by Ike Fredregill

Four years ago, a Facebook notice about the Altoona Community Band proved to be a siren song to Marsha Hunter of Duncansville, who, having not played a clarinet for 47 years, nevertheless bought one and joined.

As a member, Hunter struck up an acquaintance with fellow clarinetist Cathy Lingenfelter of East Freedom, who took her under wing, becoming the “wind beneath my wings,” said Hunter, as both laughed at the windy cliches Thursday evening.

They were sitting side-by-side in a covered float with other band members on 10th Avenue, getting ready to roll as part of the city’s downtown Spirit of Christmas Parade, along with 100 other units.

“It worked out,” said Hunter of her decision to return to music, giving her entree to events like the parade, along with camaraderie with people like Lingenfelter.

“Music is good for the spirit,” Hunter said. 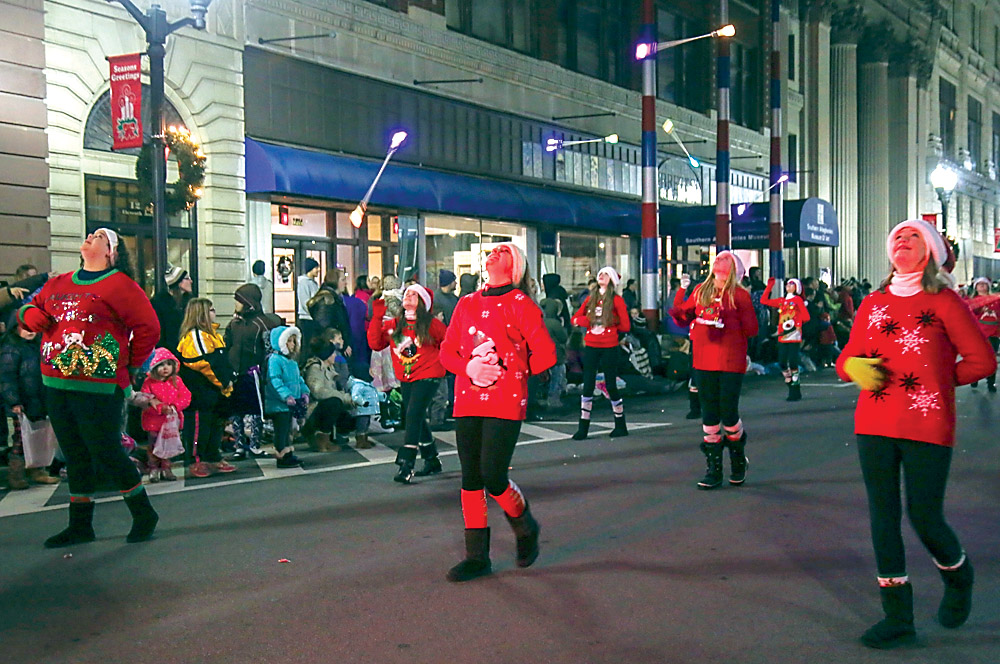 Members of Star-Lite Twirlers of Tyrone toss their LED batons into the night sky during the Spirit of Christmas parade on Thursday in Altoona. Photo for the Mirror by Ike Fredregill

A little northward, Ashley Lockard, 16, was in the Big Brothers Big Sisters of Blair County contingent — as a big sister, having graduated from being a “little.”

Ashley has a store of good Christmas memories that include getting presents and spending time with her mom and brothers, and the upcoming parade had the potential to add to that stock, she said.

“I’m here with people I like to be around,” Ashley said. “Like her,” she added, scrooching her head around in embarrassment, nodding at Jackie Lantzy, president of the board.

Big Brothers Big Sisters was participating in the parade for the first time to remind the community that the “old and forgotten” organization is still operating — and needs “bigs” to help approximately 54 “littles” in need of mentors, Lantzy said.

Still farther north, and thus destined to enter the parade farther back, Greater Altoona Career and Technology Center 11th-grader Karissa Baker was with fellow 11th-grader Terri Henry and 12th-grader Daniel Young, next to the CTC float.

They are members of SkillsUSA, a group at school that does charitable work, engages in competitions and attends social events to develop leadership, Young said.

They were planning to hand out batteries for smoke detectors, children’s books and stuffed animals along the parade route.

Karissa, who is studying computer programming at school and wants to work in software to benefit others as a career, received a lesson near Burger King on Plank Road from her grandmother a couple of years ago that stuck, when they encountered a homeless man who was asking for help, and her grandmother said, “Let’s buy him some food.”

Also in line, in the back seat of a 1992 Rolls-Royce Corniche, a convertible with the top down from Lenny’s Classic Car Collection, was Altoona Area Business Community President Shawniece Patterson. The seats were cream leather but looked as soft as velour. Patterson looked cramped, but didn’t feel it.

“It feels like royalty,” Patterson said. “This is a once-in-a-lifetime.”

To the south of Patterson was a contingent from the Altoona Community Theatre, led by Shane Sedlemyer, who directed “Peter and the Starcatcher” and, a couple of weeks ago, “Elf the Musical.”

“Elf” was lots of fun, just like the parade would be, Sedlemyer said.

Except that the parade was a little more “low stakes” than the sold-out shows, Sedlemyer said.

All the units received preliminary instructions on where to enter 10th Avenue, which was closed to traffic, to facilitate reaching their assigned spots — either on the inside or the outside lane of the three-lane expressway, Drenning said.

It’s important that they enter the parade in order, because the marshal on the reviewing stand at Heritage Plaza identifies each based on a script, Miller said.

Every once in a while there was “a little confusion,” Drenning said.

Parade watchers Patti and Brian Krier stood in front of the post office to watch their 10th-grade son in the high school band.

Both had participated in the parade as youngsters — she with the color guard at Keith, he with the band at Roosevelt.

“It was one of those things you do,” Brian said.

You could talk about it later, as an adventure — for instance, about how cold your legs felt, Patti said.

Or about the girl whose hand froze onto the flagpole she was carrying, Brian said.

“It’s nice to take part in the tradition,” Patti said.

HOLLIDAYSBURG — A Blair County judge is asking the state Superior Court to reject appeals offered on behalf of ...