New officials to be sworn in at revamped county courthouse 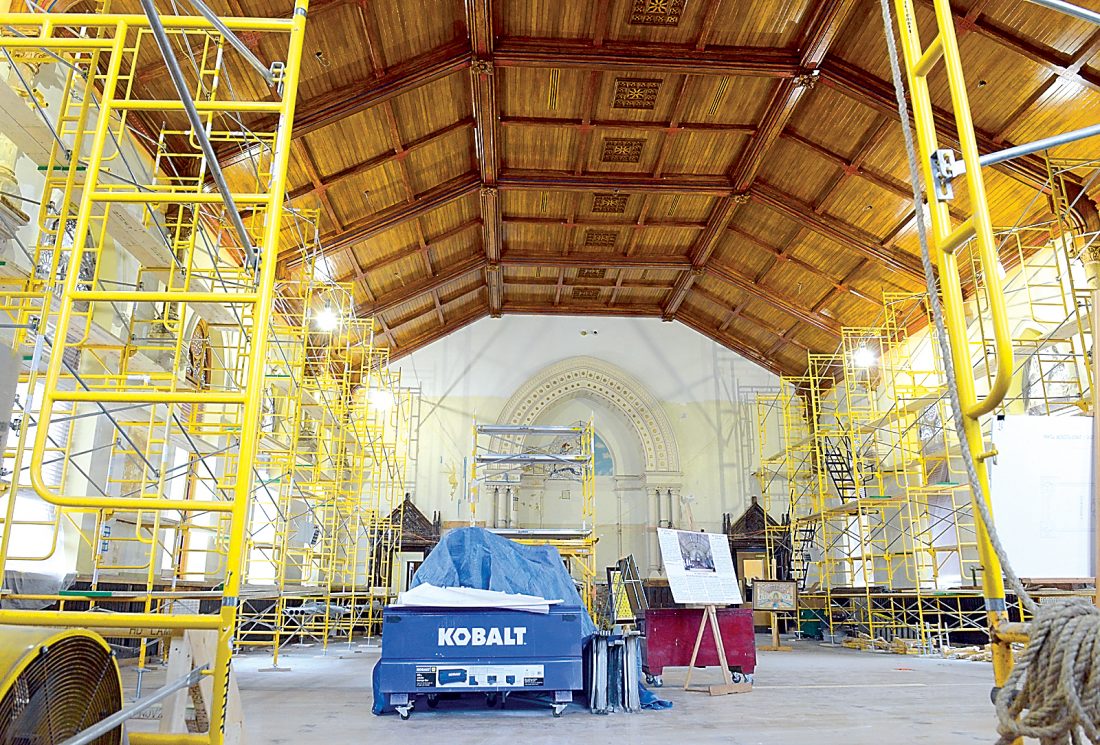 Extensive renovations to Courtroom 2 at the Blair County Courthouse were completed this year. The courtroom in the 1875 courthouse will now be known as Courtroom 1 to reflect its status as the building’s original courtroom. Mirror file photo

HOLLIDAYSBURG — When Blair County commissioners hold their last meeting of the year on Dec. 31, they will convene in the public meeting room of the courthouse for the first time since June 2018.

Their Dec. 17 meeting, they said, would be the last in Conference Room 2B, marking the end of an era when the public meeting room, located in the basement of the courthouse, became a temporary replace­ment for Courtroom 2 that was closed for extensive renovations.

Courtroom 2, which is going to be designated as Courtroom 1 in light of it being the original courtroom in the 1875 courthouse, has been designated as the site for the Jan. 6 ceremony to administer the oath of office to newly elected county officials.

The courtroom in the courthouse’s 1906 addition, which at some time became designated as Courtroom 1, will resume its former designation as Courtroom 2 because it was the second courtroom created through an expansion of the county courthouse. Current plans call for the 1906 courtroom to remain closed through early 2020, to await delivery and installation of refinished benches.

Fellow elected officials have been rendering praise and offering farewell comments to commissioners Terry Tomassetti and Ted Beam Jr. who will end their terms in office at the Dec. 31 meeting.

Tomassetti is finishing 12 years on the commissioners board and did not seek re-election. Beam, who is ending eight years, lost his seat to Burke.

“Your experience will be missed,” Erb told Tomassetti and Beam during the December meeting of the county’s retirement board, which in recent years has focused its efforts on measures aimed at lengthening the solvency of the county’s pension plan.

Stickel, who joined the retirement board four years ago and will remain on the board during his second term as controller, said prior boards showed “a gross dereliction” in failing to regularly contribute general fund money to the pension plan.

“This board put us on sound footing,” Stickel said.

The other retiring elected official is Mary Ann Bennis, the county’s register/record­er. She has served 16 years in office, since 2004, and directs a staff that records and preserves legal documents concerning property transactions, wills and estates.

Blair County commissioners used to serve as members of the property tax appeals assessment board. But prior to the county’s reassessment project, the commissioners started appointing community members to hear appeals, a practice that has since continued and is allowed under property assessment laws.

For 2020, the county is now seeking applications from people interested in being on the county’s assessment appeals board. The terms of the current appeals board members — Linda Smith, Richard Moran and James Crawford — end as of December.

Commissioner Bruce Erb said he recently spoke with incoming commissioners Amy Webster and Laura Burke about soliciting applications from people who may be interested in serving on the assessment appeals board.

The application, now posted on the county’s website at www.blairco.org, asks those interested to submit a one-page resume with relevant real estate valuation experience by Thursday to the commissioners office.

“This is not a job for someone with no background in the evaluation of real estate,” Tomassetti said during a Dec. 12 salary board meeting where compensation was discussed.

Those appointed to the assessment appeals board are paid $150 for a full day and $75 for a half day of hearings or training, as set by the county salary board.