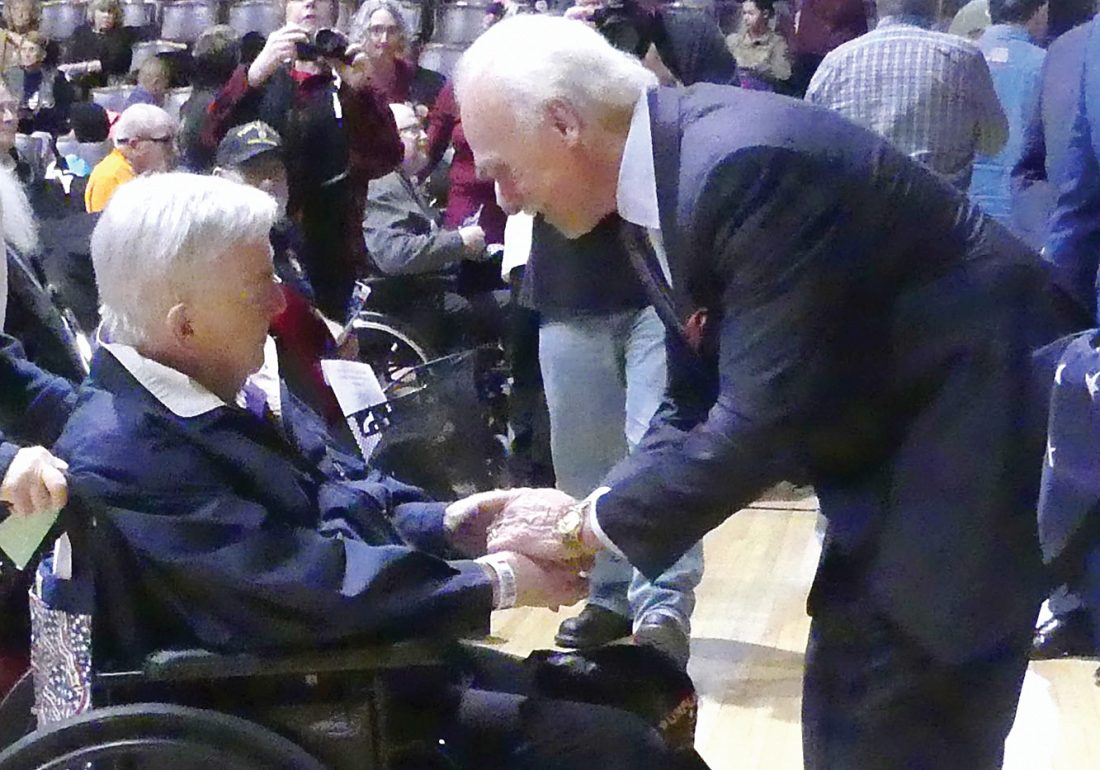 More than 400 Vietnam veterans received recognition for their military service Friday at the Jaffa Shrine Center — long overdue recognition, according to some attendees.

Sandy Neal of Tipton, wife of Army Lt. Barry Neal, said, “It’s something that’s been a long time in coming for many years. The recognition is long overdue. And we mustn’t forget those that are missing.”

Lt. Neal and other members of the armed services gathered to participate in a pinning ceremony organized by local legislators with keynote speaker Rocky Bleier.

The veterans had the opportunity to meet and receive their pin from Bleier, whose football career with the Pittsburgh Steelers was interrupted by his service in Vietnam.

“I think it’s been such an honor to shake Rocky Bleier’s hand and have a picture taken with him,” said Army veteran Rick Walter of East Freedom. “It’s nice to be recognized since we weren’t when we first came home.”

The Vietnam Veteran Commemoration Lapel Pins were created by a federal commission, the United States of America Vietnam War Commemoration, for all veterans who served on active duty from Nov. 1, 1955, to May 15, 1975. A federal law created the commission to mark the 50th anniversary of the Vietnam War. Nine million Americans served on active duty during that time, of which about 7 million were alive as of Memorial Day 2012 when the commission formed.

Bleier was appointed to the commission by former Pennsylvania Gov. Tom Ridge.

The commission continues its work until Veterans Day 2025 to honor Vietnam veterans who returned home amid anti-war protests.

To highlight the service of Vietnam veterans and commemorate the 50th anniversary of the war, the U.S. secretary of defense initiated a national pinning program, which aims to honor the 6.4 million Vietnam veterans throughout the United States.

Gregory, who spearheaded the event, contacted Rocco Scalzi to bring in Bleier, who partners with Scalzi in the Beating the Odds Foundation that serves students and veterans. Bleier received a Purple Heart for being wounded in the war and persevered through extensive physical therapy after being wounded to make it back to playing for the Steelers.

He went on to play as part of four Super Bowl Champion teams.

Richard Himes of Tyrone showed off his pin which he received for his service as a private first class in the Army. Asked what he was going to do with it, he said “It’s very special, and I’m going to put it on my suit jacket and wear it proudly.”

CLEARFIELD — A Houtzdale man is facing charges for allegedly kicking, punching and strangling a handicapped ...

A state prison sentence for an Altoona man with a history of DUI and other offenses has been upheld by an appeals ...

Altoona Area High School students arrived at school Wednesday morning to the news that one of their classmates lost ...

MARTINSBURG — State police are investigating an officer-involved shooting along Cove Mountain Road in ...