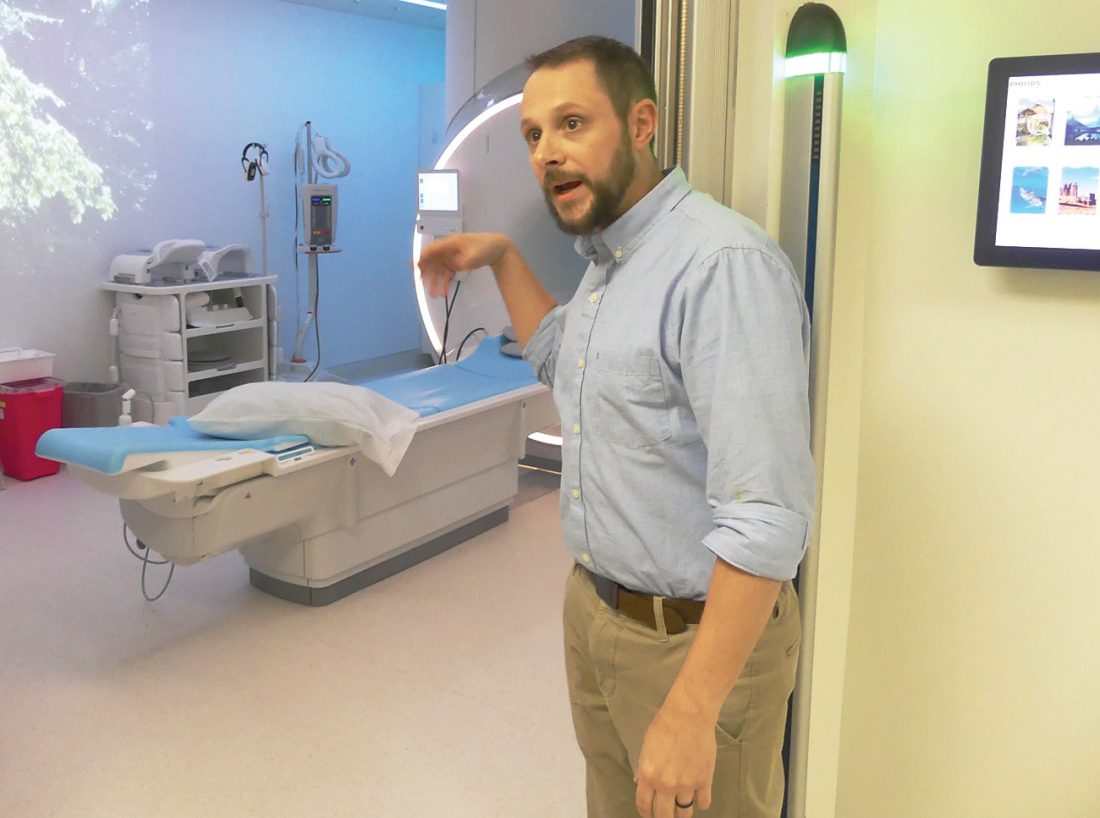 Van Zandt VA Medical Center has a new Magnetic Resonance Imaging system, the only one in North America that is almost helium-free and that has a large bore and a full package of audio-visual imaging, both of which help prevent claustrophobia in patients.

The $1.5-million machine, which can scan more quickly than the standard one it replaced, coupled with the hospital’s four-hour extension of MRI lab hours and the doubling of the tech staff to four, will enable Van Zandt to almost triple its daily MRI patient load to 22, according to Van Zandt Radiology Supervisor Greg Woelfl and hospital spokesman Shaun Shenk.

Claustrophobia is a “significant” concern for many MRI patients, according to Woelfl.

The new machine’s large bore eases that concern, because the tunnel in which patients sometimes need to lie is far more spacious.

When Shenk, a large man, was scanned in the hospital’s old, standard MRI, his nose was just a few inches from the top, which made him uncomfortable, even though he doesn’t tend to suffer claustrophobia, Shenk said.

The bores of the standard MRIs are typically about 21.6 inches, according to Woelfl. The new one’s bore is 27.5 inches.

Patients about to be scanned can set the themes of the audio-video displays designed to be relaxing during the 15 to 45 minutes they’ll spend in the machine, choosing from themes like “underwater” or “forest,” according to Woelfl.

They can also see a progress bar, so they get a sense of how much longer they’ll need to wait.

There are “open” MRIs, with magnets top and bottom, but not a tunnel, that reduce claustrophobia “exponentially,” but those can’t produce images for every part of the body, the ones they produce are of lesser quality and take longer, according to independentimaging.com.

Van Zandt’s new machine provides images whose quality is equal to that of the standard MRIs, Woelfl said.

The new machine uses helium, but only a small amount sealed inside, so it doesn’t need to be periodically replenished, as with standard machines — thus helping preserve a non-renewable resource that is growing scarce, because, when released, it rises and escapes the atmosphere, according to Woelfl and online sources.

MRIs work by realigning in orderly fashion the normally random alignment of hydrogen protons in the body, then releasing the force that created the orderly alignment with a radio pulse and detecting differences in the speed of the protons returning to random alignment between various types of tissue — fat, water and bone, for example, according to Woelfl. The differences appear as gradations of darkness in the images produced, according to Woelfl.

MRIs can help detect tumors, aneurysms, bone fractures, torn ligaments and vascular conditions, although in some cases, other kinds of testing is needed to obtain additional information.

MRI lab workers need to be careful about eliminating ferrous metals on or in patients, including pacemakers and jewelry attached through piercings, because of the power of the magnetism, according to Woelfl.