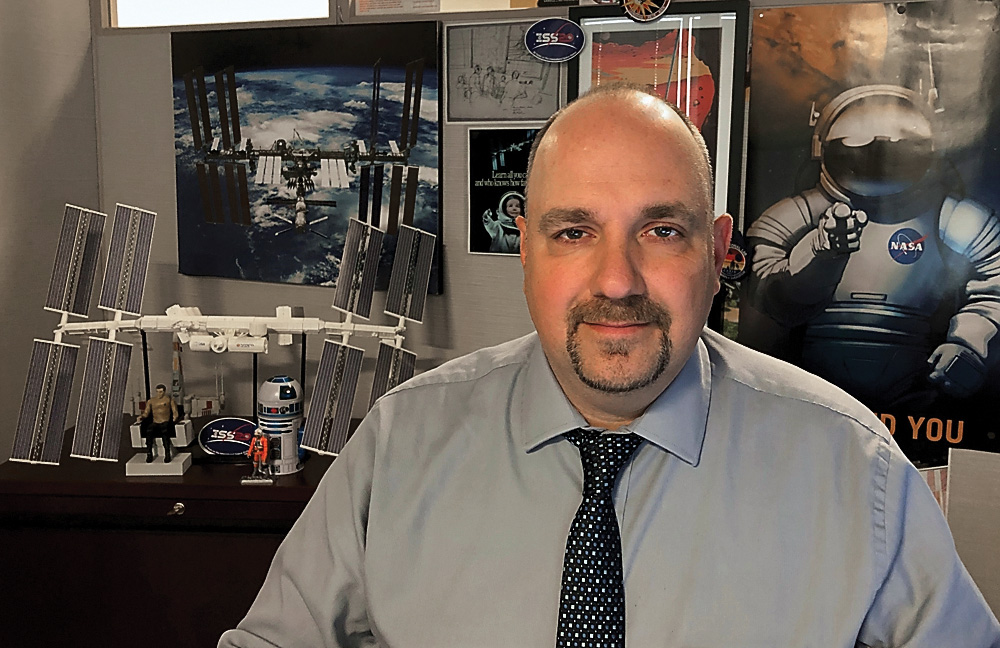 International Space Station Operations Manager Kevin Metrocavage is responsible for supporting the space station from Earth. He spoke from his office in Washington, D.C., to Mount Aloysius students on Thursday about the impact of space exploration on daily life.

CRESSON — A Pennsylvania native who manages operations of the International Space Station discussed life and space exploration with Mount Aloysius students on Thursday.

Currently, there are three U.S. astronauts and two Russian cosmonauts on the spacecraft, which is the size of a football field.

Kevin Metrocavage, International Space Station operations manager, is responsible for supporting the space station from Earth by providing input and status updates to those aboard the station and NASA leadership.

“No matter what is going on between countries, we have to find a way to work together; few things can bring us together like a space station,” he said through a live video feed from his office in Washington, D.C., to a room full of about 40 Mount Aloysius students.

Space exploration is more relevant to life on earth than many may think.

With knowledge of how the human body reacts in space, new ways of solving problems that impact many people on Earth emerge, he said. For example, astronauts’ eyes and bone density change in space. How their bodies react helps find solutions for macular degeneration and osteoporosis, he said.

With the International Space Station, there has been continuous human presence in space since November 2000.

The ISS is now on expedition 61, which Metrocavage said is important to the next exploration of the moon.

The Shamokin native’s interest in space started in his childhood, with an X-wing spacecraft toy from the “Star Wars” movies. He dreamed of working for NASA, but struggled through engineering at Purdue University, he said.

He advised students not to give up when their studies become difficult.

“I had no idea that I would get knocked down as hard as I did when I was in college. But you can’t dream too big. Fight through the tough times,” he said.

Students asked him questions about his experiences.

Freshman student Ashley Weakland of Loretto said the opportunity to speak with Metrocavage was “intriguing.”

“They do a lot more in space than I thought,” she said, noting Metrocavage’s statements on how research brought from the ISS helps solve real problems on earth.

“When you think of space, you don’t think of practical things, but he made it very reachable,” she said.