Edwards ‘in awe’ at being on Lions Club International board 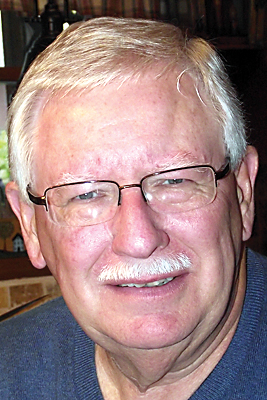 You could call Larry Edwards a reluctant Lion.

Edwards, 71, an Altoona native, was elected to Lions Club International’s Board of Directors during the association’s 102nd International Convention in Milan, Italy, in July.

For the first time since 2015, Pennsylvania or Multiple District 14, has a representative on the board.

Edwards joined the Lakemont Lions Club in 2005 after some persistent “nagging” by his father-in-law, Robert Edwards, a Lakemont Club member.

“He was after me constantly. I did it to get him off my back; I had no intention of joining. I became totally engaged in the whole program. Susan (his wife) joined after me. It was a great fit,” Larry Edwards said.

“Dad kept bugging him. When he saw what Lions were involved in, he went in with both feet, full speed ahead. When he joins an organization, he is in 100 percent and will continue to do that,” Susan Edwards said of her husband.

Larry Edwards has held several positions with the Lakemont club, including president and secretary.

Retiring in July 2016 after spending 45 years in the banking industry — he retired as director of operations for Reliance Bank — Edwards had time to pursue a role as an international director.

Lions Club International is the world’s largest nonprofit service organization with 1.4 million members and some 46,000 clubs.

There are 34 directors worldwide, with 11 from the United States, Larry Edwards said.

He said he was approached by the state organization to see if he would be interested in becoming an international director.

“I didn’t at first,” Edwards said. “I went through the ranks of club officers, was district governor, a state council chair.”

“I was courted. If I had interest, the state would support me. Our last candidate from Pennsylvania was in 2013. We were due. The state organization talked me into it. I felt it would be an interesting process. I thought I would enjoy and add some value to the process,” Larry Edwards said.

He also needed to belong to a club with 1,250 or more members. His small Lakemont club didn’t qualify.

So in order to pursue becoming an international director, in July 2018, Larry and Susan joined the larger Harris Township Lions Club in Centre County.

Larry Edwards admitted it was difficult to leave the Lakemont Club.

“It was a hard decision. Susan and I helped grow the club, taking membership from 30 to 75. Lakemont was supportive; no one said we were abandoning them. We were actively involved,” Larry Edwards said.

Larry Edwards captured the needed endorsements and was among 16 candidates for six positions at the international convention.

He said being named an international director was an awesome experience.

“I was in awe; it was hard to believe. There were 5,500 delegates there, 23,000 attendees at the convention. When they made the announcement in front of the entire convention and brought us to the stage, it was an awesome process. I was kind of in awe of the process,” Larry Edwards said. “I was pretty confident. If you were endorsed by the international executive committee, the odds were pretty good.”

Susan Edwards is proud of her husband.

“This is a dream; it is a dream being fulfilled. Lions is an organization he believes in strongly as well as myself. I am proud to sit next to him as his partner in service and work beside him,” Susan Edwards said.

Larry Edwards will serve a two-year term and is serving on the membership development committee.

As an international director, he will do a lot of traveling for speaking engagements.

“Most of mine are in the United States, at district and state conventions. We are asked to talk about programs we have going on, the newest and latest things. I have 17 engagements lined up between now and July 2020 all across the country. Lions Club International does a superb job of taking care of your travel,” Larry Edwards said.

In recognition of his service, Edwards has received numerous recognitions including two International President’s awards. He is a progressive Melvin Jones fellow and a Lion of Pa. Fellow.

He is currently the president of the Lions Sight Conservation Foundation of Blair County.

Education: 1966 graduate of Altoona Area High School and a 1968 graduate of Penn State with an associate degree in engineering.

Position: Member of board of directors of Lions Club International

Quote: “I enjoy the opportunity to help those in need. Lions are a service organization, we help many global causes. We partner with companies like Johnson & Johnson and the Gates Foundation. We have some deep pockets that help us tremendously.”