Volunteers spruce up roads through 'adoptions' 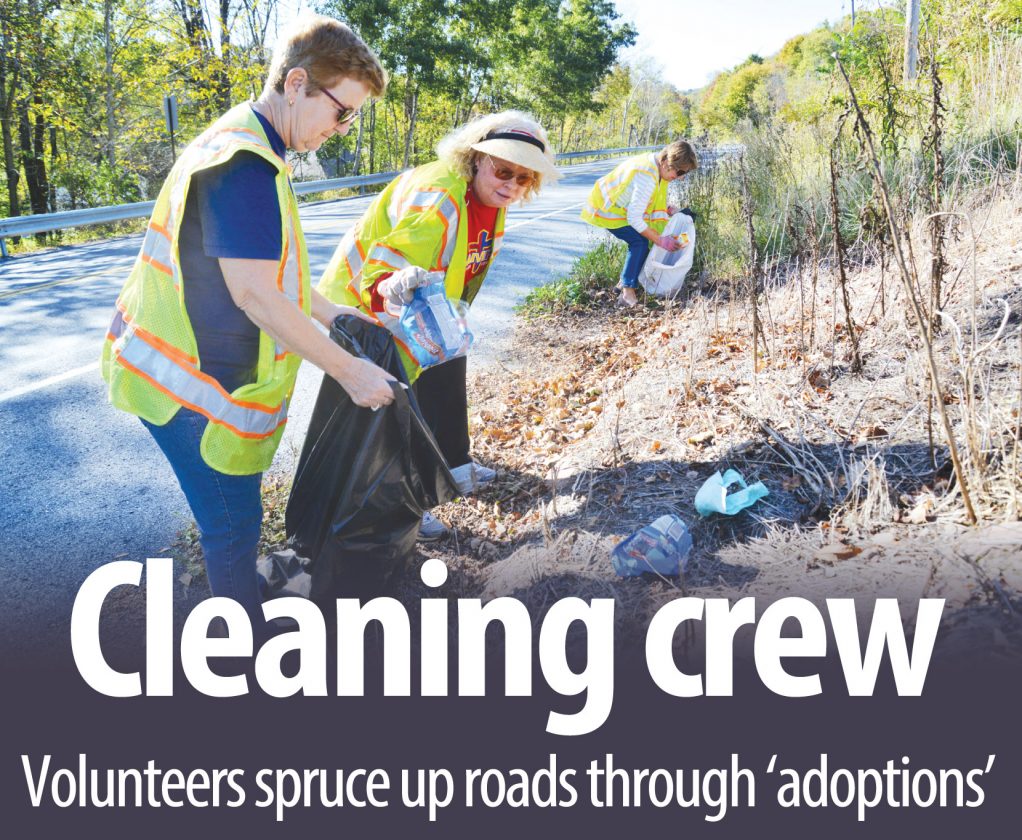 Cleaning up litter along Pennsylvania’s roads is personal for an Ashville woman.

Susie LeComte, 54, adopted a highway in memory of her sons who both passed away when they were 19. Although LeComte has experienced major loss in her family, she remains positive and is active in the community.

“We try to make a positive out of anything negative we can, and if you can get people together and cause something positive from something very negative, it is a good feeling,” she said.

LeComte joined the Adopt A Highway program in 2017 and has a 2-mile stretch on Route 53 with two cleanup events each year, one in the fall and one in the spring.

“I drove by and said, ‘That would be cool,'” LeComte recalled of seeing a sign for the program.

PennDOT’s Adopt A Highway program is now in its 30th year.

Tara Callahan-Henry, PennDOT District 9 spokeswoman, said there are always stretches of road that are available for volunteers.

“There are some routes that are too busy that we don’t want people on,” she said, such as I-99. “We try to be careful with putting people on the interstate because of the high traffic.”

Adopt A Highway is a voluntary program, and anyone can participate. A two-year agreement is signed in which participants agree to clean up a 2-mile stretch at least two times a year. PennDOT, in return, posts signs along the roadway to recognize groups and individuals for their work.

LeComte said friends and family help with the cleanup with about 25 to 30 people joining in.

LeComte says it’s not hard to get people to help. They have doughnuts and coffee and use a buddy system. The cleanup takes about two hours.

“Some of the boys’ friends, my friends and family help,” she said.

LeComte had a cleanup event in May, and each event brings in about 30 to 40 bags of trash. LeComte said her group piles their trash bags up, takes a group photo and PennDOT gives them recognition for it. There hasn’t been many challenges with passing by cars. They have flags that are placed marking the 2-mile stretch during the event, Lecomte said.

“They (drivers) like to scream on by, but with all of us there, that slows it down,” she said.

LeComte recommends other people adopt a highway and wants to continue being apart of the program forever. “I tell people all the time,” she said.

LeComte lost one of her sons in a drunken driving accident.

“All my boys’ friends drive, so I want them to be reminded that they shouldn’t drink and drive because that’s how my oldest son was killed,” she said.

Lecomte said people look forward to their cleanup events, and it’s a lot of fun to do together.

Statewide, in 2018, the Adopt A Highway program saved PennDOT $5.2 million. Anyone interested in participating can reach out to the county coordinator or go to PennDOT’s website to apply. PennDOT gives those interested a couple of options for places that need cleaned up.

Since Sept. 30, 1991, Saint Francis University has participated in the Adopt A Highway program. At first the Joint Technologies Association — now called the Chemistry Club — signed up. Peter Skoner, the interim dean of the School of STEAM, has been involved since the beginning.

Skoner said students suggested it would be a good service opportunity, and the club has been participating in the program ever since. He pointed out community service and engagement is part of the university’s mission.

“Someone asked what are some things we can do to get involved in the community, and someone said, ‘I think they’re cleaning trash up along the highway. Why don’t we check into it?'” Skoner said. “We made the call to PennDOT, and they penciled us in.'”

The Chemistry Club gets about 10 to 15 students for each of the four Adopt A Highway cleanups scheduled each year. Skoner said it typically takes about two hours to complete the 2-mile stretch that spans from Loretto’s village square to Ebensburg, and they get about 10 to 20 bags of trash each time.

One former student and now associate dean of business, John Miko, knows firsthand the benefits of the community service aspect. Miko recalled getting up early on Saturday mornings and getting out with his friends.

“It’s always a positive experience,” Skoner said. “We begin in a classroom on campus viewing a safety video that’s provided by PennDOT and review safety procedures, planning the event and giving out gloves, safety vests and trash bags all provided by PennDOT.”

After the cleanup, the club goes back to campus for a group photo.

Skoner said the club has not faced many challenges in their 28 years. He said because of the rural setting, they have not encountered any problems with passing cars.

“Given that students and faculty continue to volunteer their time year after year for 28 years now is evidence that the project is worthwhile,” Skoner said. “Working together on projects like this is educational and serves the community while building friendships.”

In 2017, the Chemistry Club received an award for 25 years of participating in the program. There are signs designating 25-year participants along their stretch.

Typically, groups will call PennDOT to notify it about an event and request supplies. But if not, PennDOT has a tracking system where it can find out who is logging their cleanups. PennDOT can also keep track of the number of groups.

“It’s easy to keep track that way, but PennDOT will pick up the trash bags after the event so if someone forgot to log it in the system, we can track it that way,” Callahan-Henry said.

There are many benefits to the Adopt A Highway program, Callahan-Henry noted. It is good for the environment, and it saves money.

“You want to beautify the state that you live in,” she said.

Travis McCabe, 44, co-owner of the Greenbean Coffee House in Altoona, is new to the Adopt A Highway program and has been participating for about three months.

McCabe said his group plans to pick up litter every six months.

“One of the managers came up with the idea,” McCabe said.

McCabe said Greenbeans has 13 employees and continues to expand as the business is growing. Each employee helps with the cleanup, and they are excited about participating in the program.

McCabe said it took about three to four hours to clean up their stretch and gather 15 to 25 bags of trash. McCabe said his group has not faced any challenges so far.

“You honk the horn if you see someone else cleaning up,” McCabe said of his reaction when he sees people picking up litter along the road. “Getting the horn honked back, you’re surprised how much people really appreciate what you’re doing.”

PennDOT regularly receives calls about litter along the highways, especially in early spring when the snow has melted and trash is most visible. The volunteers really make a big difference in keeping the area’s roads clean and in picking up all that garbage.

They never know what they may find.

McCabe said the strangest finds so far have been a suitcase, boxes and metal cans.

LeComte said the weirdest things that they have found were a driver’s license, drug paraphernalia, car parts and tires, while Skoner said the strangest things have been syringes, fast food bags, beer cans, tires and animal carcasses.

“They tell you to watch out for them, and you do see them,” he said.

PennDOT has other programs and events that tie in with the Adopt A Highway. The Adopt and Beautify program has people plant flowers in designated areas. Groups can sign up for two years and have two events a year. PennDOT asks that the participants be 8 years of age or older and have an adult involved in the planting. Participants for this program will also receive recognition for their efforts.

The great American Clean Up of Pennsylvania is March through May. Groups can go online and register to go out and clean up anywhere. PennDOT will donate supplies, Callahan-Henry said.