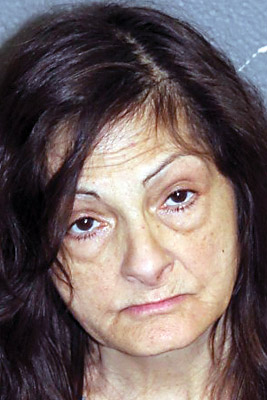 An Altoona woman faces charges after police say she hit her husband over the head with a wine bottle.

Tracy Ann Summers, 54, was taken into custody at her home at 314 Willow Ave. about 12:15 a.m. Tuesday after Altoona police were dispatched to the home for a report of a domestic dispute and allegedly found an extremely drunk Summers on the porch with an empty wine bottle in her hand.

According charges filed by Altoona police, Summers claimed her husband had been drinking all day and she said she drank the entire bottle of wine and struck him in the head when he “came at her naked.”

Police noted Summers’ husband told officers he was trying to sleep on the couch in the living room when his wife started to play music and dance around the kitchen. He said he got up, walked into the kitchen to ask her what she was doing and she “picked up the empty wine bottle and flinched at him,” Altoona police Patrolman Cody Ward wrote in the charges.

Summers allegedly swung the bottle at her husband’s head, but missed, when the man asked her what she was going to do with the bottle and if she was going to hit him. He told police he walked back into the living room and laid back down on the couch, but as he did, Summers walked into the room.

The husband said he stood up to ask what she was doing, and Summers allegedly hit him on the head with the empty bottle.

The husband said he was not naked, but he was in his underwear because he was trying to sleep.

Police noted the husband was taken to UPMC Altoona and received three staples to close the cut on his head.

Summers was booked on a misdemeanor charge of simple assault along with a summary charge of harassment. She was lodged in Blair County Prison in lieu of 10 percent of $10,000 bail set by Magisterial District Judge Fred Miller on Tuesday morning.

A preliminary hearing is scheduled for Oct. 23 at Central Court.