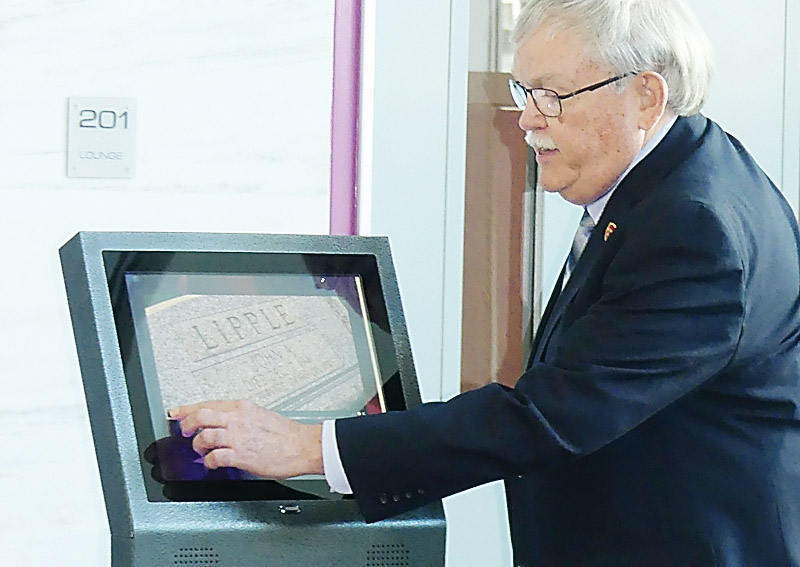 Dale Wicks demonstrates a new interactive kiosk in the lobby of the 1st Summit Arena @ Cambria County War Memorial. The kiosk’s purpose is to increase access to the stories of veterans like Marine Sgt. Mike Strank of Johnstown, who participated in the U.S. flag raising on Iwo Jima that was captured in an iconic Joe Rosenthal photograph. (Mirror photo by Patt Keith)

JOHNSTOWN — Visitors to the lobby of the 1st Summit Arena @ Cambria County War Memorial gained easier access to information about county war heroes Marine Corps Sgt. and Iwo Jima flag raiser Mike Strank and John Lipple, a seaman from Ashville who died in the attack on the USS Arizona at Pearl Harbor on Dec. 7, 1941.

The kiosk was purchased by the War Memorial Veterans Committee with payment for the videos coming from the Veterans Monument Committee and individual contributors.

Committee President Bob Eyer recognized committee members present at the event and praised Dale Wicks of Wix Pix Productions for his work on the two documentaries and his overall enthusiasm.

The purpose is to tell Strank’s and Lipple’s stories and get more people to acknowledge their sacrifice. Strank and two others who participated in the flag raising were killed in action shortly afterward.

“When someone comes in to visit the box office to buy tickets to an event, I hope they will come over and use the kiosk,” Wicks said. “The more people that come and watch, the more people will remember Strank and the others. These people shouldn’t be forgotten. We don’t want them to disappear from our memories.”

In his remarks, Wicks recounted how on Feb. 23, 1945, Strank organized five other men for a second — and larger — flag raising atop Mount Suribachi. Strank kept the 5-foot by 8-foot flag from touching the ground as he and the others tied the 48-star flag to a make-shift pole. It is this second flag raising captured by photographer Joe Rosenthal that rallied Americans at home to raise more than $27 billion through war bond sales.

Wicks encourages people to change the national narrative about Johnstown from being known for its historic floods. “From now on, when people ask where you’re from, tell them, ‘I’m from Johnstown, PA, home of Sgt. Michael Strank, the Marine who led the Iwo Jima flag raising.'”

Several other events are scheduled to mark Strank’s 100th birthday on Nov. 10:

– Showing of the Mike Strank documentary and the film “Flags of Our Fathers” on Nov. 10 at the Westwood Plaza Theater in Johnstown.

– Placing of a large metal silhouette of the flag raising at the memorial park in Franklin Borough, near the site of Strank’s childhood home.

– A Tomahawks hockey game dedicated to veterans on Nov. 9.

– Giving teachers access to the Strank documentary online, along with lesson plans, to encourage the telling of stories like his to area youth.

– Placing special Strank memorabilia in the Military Museum at the War Memorial.

– Placing a 5- by 8-foot U.S. flag (same size as the Iwo Jima flag) near the observation deck of the Incline Plane; that hill is the same height as Mount Suribachi.