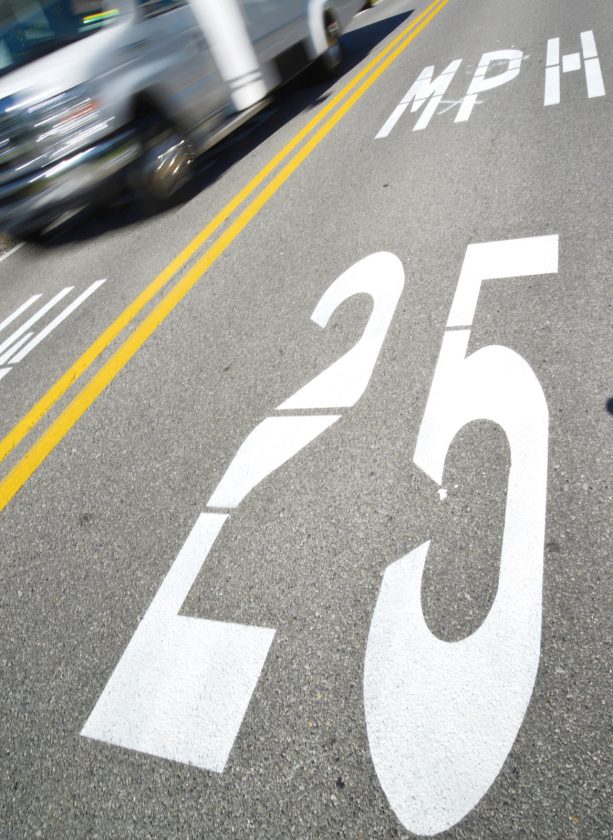 Mirror photo by Patrick Waksmunski / The 25 mph speed limit is painted on both lanes of Ruskin Drive in Altoona.

In response to persistent complaints from residents about traffic safety problems on Ruskin Drive, the city has painted the speed limit — 25 mph — in large figures directly on the travel lanes.

Officials hope the exclamatory nature of the postings — there are 10 in all at various locations along the 1.5-mile stretch between Baker Elementary School and 58th Street — discourages the frequent violation of that speed limit.

Vehicles routinely whiz by between 50 and 70 mph when he’s working in the yard, resident John Datkovich told council.

“If you think it’s not a problem, try walking on it,” said resident Richard Slutzker. “It’s an old country farm road.”

Police have focused on Ruskin since early July and have issued 90 citations so far, said Deputy Police Chief Tony Alianiello.

Residents and officials have suggested a variety of other measures, including stop signs, automatic license plate cameras and speed humps.

But regulations from Penn­DOT and the federal government require that “warrants” be met to justify studies that can lead to installation of such traffic control measures, said Public Works Director Nate Kissell.

One of the easiest warrants to meet consists of five crashes at one location in one year, he said.

But without warrants, control measures are “difficult to defend,” Kissell said.

There are other impediments.

Philadelphia is the only municipality in the state authorized to install license plate cameras, said Councilman Bruce Kelley.

While Hollidaysburg has speed humps near its junior and senior high schools, installing those can “open Pandora’s box,” Kissell said.

“You don’t want them all over the city,” he said, explaining that they can cause hassles for plow drivers and can cause crashes.

“We’ve done about as much as we can (so far),” Marshall said.

“Be a little patient,” Kissell said.

“I don’t want to see you drop it,” Slutzker said. “When I look out the window and see people ripping down the street, it’s not a peaceful, easy feeling.”