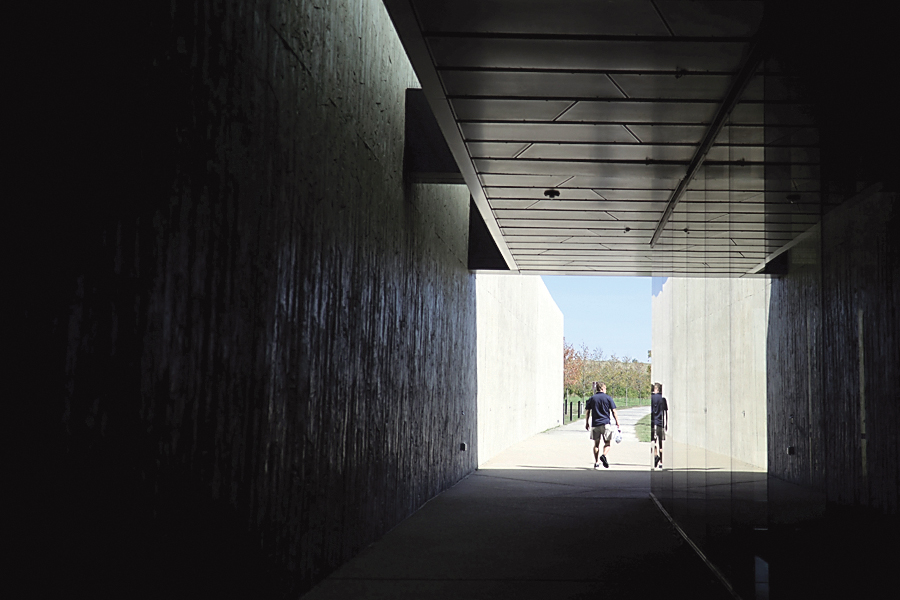 A man walks through the corridors of the Flight 93 Memorial in Shanksville on Friday where officials met to discuss connecting the Great Allegheny Passage to the Flight 93 National Memorial Trail. Herald-Standard photo by Alyssa Choiniere

Department of Conservation and Natural Resources Secretary Cindy Dunn spoke alongside members of the September 11th National Memorial Trail Alliance and Somerset County officials at the memorial Friday to discuss the project.

The completed September 11th National Memorial Trail would connect the Flight 93 Memorial in Shanksville to the World Trade Center memorial in New York City and the National 9/11 Pentagon Memorial in Arlington, Virginia, creating a 1,300-mile trail.

“It’s a source of inspiration when you think about the 40 and what they did here,” said Steve Clark, Superintendent of the National Parks of Western Pennsylvania.

The priority now, Dunn said, is bridging the 20 mile gap between the Flight 93 trail and the Great Allegheny Passage as it passes through Garrett.

“When citizens resolve to do something for the benefit of society, it can be done,” she said.

The Restore Pennsylvania proposal is an infrastructure project to revitalize economically disadvantaged communities. The project would be funded through a severance tax on natural gas, if approved by the Legislature. It will take $46 million to meet a DCNR goal of placing a bike trail within 15 minutes of every Pennsylvanian.

“It’s a lofty goal,” Dunn said. “It literally lifts the communities through which it travels,” she said.

Somerset County Commissioner Gerald Walker said they plan to have designs drawn for its portion of the trail by June, secure permits by July, and complete construction between October to December 2020.

“This isn’t just another bike trail,” he said, adding that it is a way to honor those who died and educate those who did not live through Sept. 11, 2001.

“You remember the day, you remember what you went through to find that resiliency that got you through,” Dunn said. “I, for one, went on top of a mountain.”