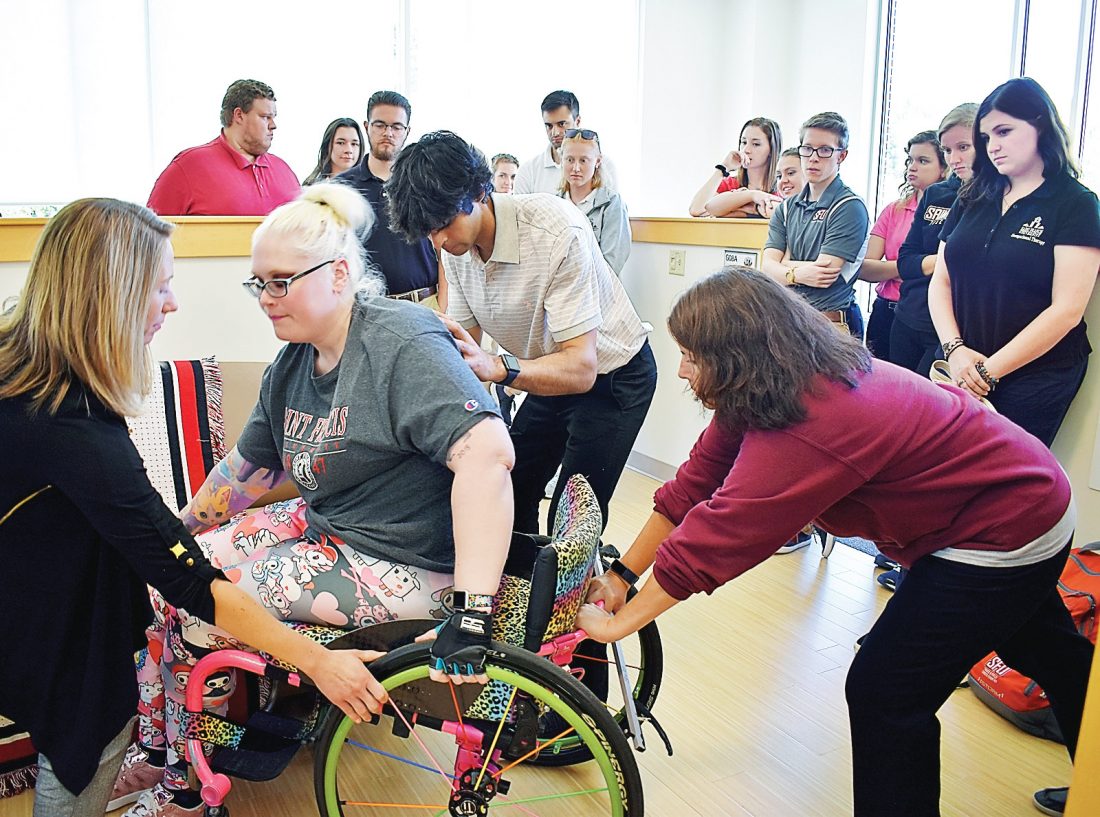 Saint Francis University students work with guest speaker Barb Zaplotney of Windber and learn how to transfer someone from a wheelchair to a couch on Thursday. The hands-on training with Zaplotney, state coordinator for Ms. Wheelchair Pennsylvania, was part of the university’s new Experiential Learning Commons program. Courtesy photo

Barb Zaplotney’s life changed “in a blink of an eye” 12 years ago.

The 33-year-old Windber resident became paralyzed in a car crash returning to Scranton after Christmas break.

The impact severed her spinal cord at T-10 and shattered her T-11 and T-12 vertebrae. Zaplotney, who uses a wheelchair, spoke to 80 physical and occupational therapy students at Saint Francis University to share experiences in recovery and in advocacy for greater access and inclusivity for people with disabilities.

The goal of the talk and the learning-through-doing exercises provided students with a glimpse into the challenges those with disabilities face daily.

Senior Mary Kinman heard Zaplotney’s message to students to “see the person and not the diagnosis. It’s a very important message. She’s so inspiring in how she’s come to terms with it. It’s good advice to see (our patients) as people and to empathize with them.”

It’s a lesson Zaplotney learned through her own less-than-ideal rehabilitation experiences.

“I found the therapists to be quite cold and not understanding what an emotional time it was for me. Sometimes it would hit me and I’d break down and cry instead of being focused on the task they were trying to teach me,” she said, adding that staff would often refer to her as “the T-10 over there” instead of referring to her by name. “I felt like they only saw my diagnosis and didn’t see me as a human being. We are not our diagnoses.”

She recalled two therapists she had who remain her friends today because they treated her as a person.

“This one OT I had listened to me and took into account that I was a 21-year-old who had just lost everything. She treated me as a human being,” Zaplotney said.

After Zaplotney spoke candidly about her daily routine, students asked questions, including “What would your perfect home look like?”

“I share a large house with my dad and for that I’m grateful,” Zaplotney shared. “But I really only live in two rooms. I would really like to have a kitchen where I can get my chair under the sink to do dishes … and have a bathroom that I can turn around in … with a roll-in shower.”

Her father recently built Zaplotney a roll-in closet and said, “It was so exciting for me.” But other modifications — such as removing a kitchen island that impedes her ability to cook and work in the kitchen — are too expensive.

While she relinquished her dream of becoming a vet tech, Zaplotney said she has a fulfilling life. She entered the Ms. Wheelchair Pennsylvania competition “on a whim. I didn’t think I’d ever win.” But she did on her platform of “changing ignorance through education and inclusivity.”

“It was an amazing experience, and what I do now is so very fulfilling. I’m blessed. Too often someone sees a person in a wheelchair. … I want them to realize it’s not the end of the world. Sometimes it’s the beginning of something even more meaningful.”

She sees communities make progress on increasing access but it comes “in baby steps,” she said. For example, her hometown installed accessible bathrooms at a park. But the next step is to remove the two steps that keep her from using the facility.

Too often, well-intentioned strangers ask her if she needs help getting out of or into her car or come up behind her and start pushing her wheelchair.

“When I’m traveling and for the 12th time someone asks me if I need help, I get a little short with them. But I realize they don’t know that they are the 12th person to ask.”

Instead of providing unsolicited help, she advises able-bodied people to think before they offer help and ask: ‘Would I help an able-bodied person do this?’ I don’t mind if someone holds a door for me because that’s the polite thing to do.

… I would really like someone to just smile at me if they see me getting into my car and to just say, ‘How are you doing today?’ When the first words they say are, “Do you need help,’ they are saying I’m not capable. If I need help, they present a friendly face and I can ask them for it if I need it.”