Thousands stuck in traffic for hours 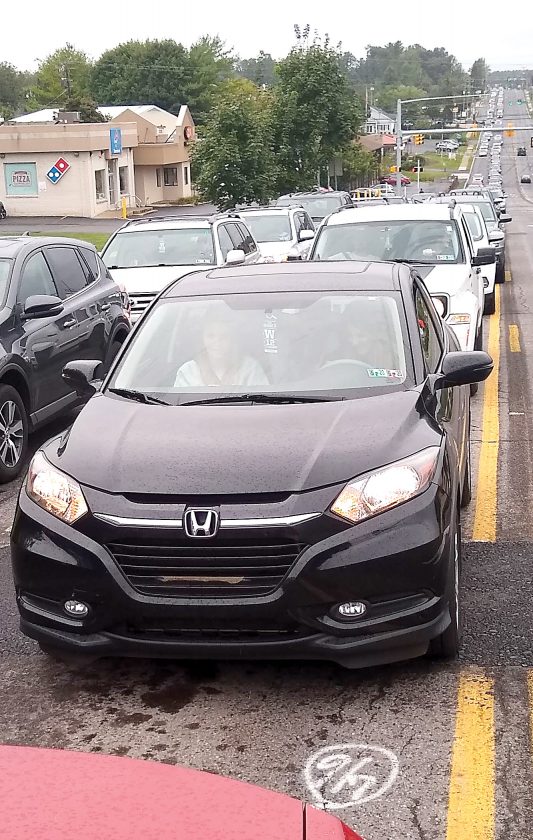 Traffic is lined up as far as the eye can see on North Atherton Street in State College on Saturday morning. Thousands of fans in town for the noon kickoff of the Penn State game against Pitt found themselves stuck in traffic for two hours or more as new traffic patterns went into effect. (Mirror photo by Patrick Waksmunski)

UNIVERSITY PARK — The sign on North Atherton Street said Park Avenue was 13 minutes away. But it took 1 hour and 43 minutes of driving in gridlock traffic to finally navigate the 2.5 miles.

The parking situation for Penn State’s game against Pitt on Saturday was disastrous in many ways. Thousands of fans were stuck in traffic delays for two hours or more prior to the noon kickoff (pushed back to 12:40 because of lightning).

Penn State has implemented a new parking system this year, forcing many fans to abandon their old routes in favor of new one-way routes designed to flow traffic to each individual parking lot.

The new system was put to its biggest test so far Saturday, with rival Pitt in town for the 100th meeting between the two programs. The situation that unfolded left many fans frustrated — and venting on social media.

“They make it harder and harder to attend games. Old system was fine and they ‘fixed’ it anyway. Now it’s total gridlock. People should be fired/demoted for this,” a fan named Cotton Hill wrote on Twitter.

“Why did they feel the need to ‘fix’ what wasn’t broken? Sometimes it is OK to admit defeat. Go back to the old system immediately,” one PSU fan listed only as Mike wrote on Twitter.

North Atherton Street, one of the primary business districts in State College, was inundated with wall-to-wall traffic. That is one of the main routes fans are expected to take, then turn left onto Park Avenue for the final stretch to Beaver Stadium.

One fan sitting in traffic couldn’t wait to eat, so he was seen gobbling down chicken wings behind the wheel.

Other fans who were passengers could be seen exiting their vehicles to walk the final 2-3 miles to the stadium.

“We’ve been getting lots of feedback,” Penn State Athletic Director Sandy Barbour told the Mirror about the new parking system. “We have work to do. We know that.”

Penn State paid a private company to provide input for the new parking system, which has been in effect for three home games so far this season.

The Lions’ next home game is another noon start, on Oct. 5 against Purdue.

Neil Rudel contributed to this report.