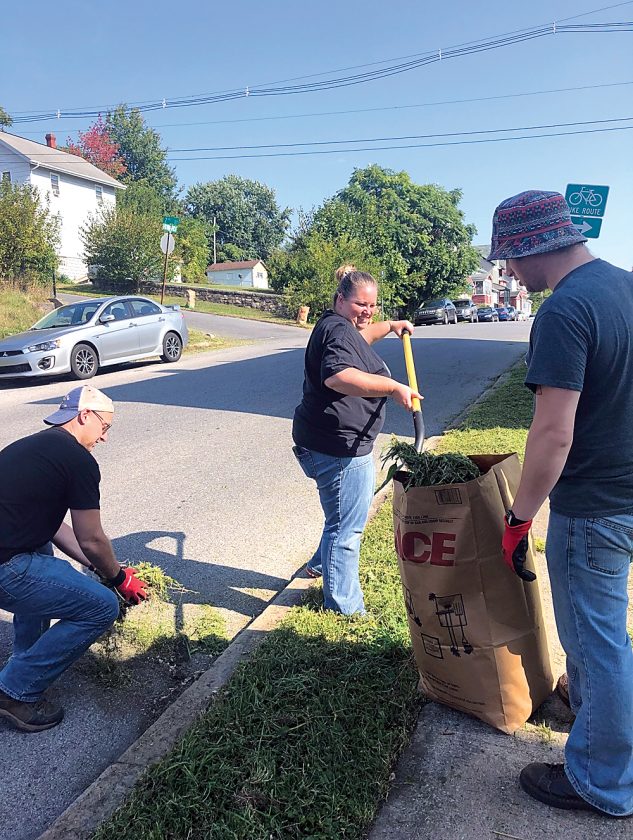 From left, Chris Farrell, Angela Weber and Wayde Simington, all with Penn Highlands Community College, help to clean up a sidewalk during the second annual Altoona Community Cleanup Day on Saturday. Photo for the Mirror by Alyssa Fasolo

Keeping the community in top condition is something that many Altoona residents take great pride in. Saturday, a group of volunteers set out to do just that.

From 8 a.m. to noon, the second annual Altoona Community Cleanup Day was in full swing. The event, sponsored by the United Way of Blair County, is a beautification project that focuses on one specific area of the Blair County community each year.

“We are here to clean up one designated territory within the city, an area that needed a little extra special attention,” said Melanie Shildt, executive director of the United Way of Blair County.

In addition to the United Way of Blair County, the event was made possible by Operation Our Town, the Altoona Blair County Development Corp., Blair Companies Real Estate, the City of Altoona and many local organizations and volunteer groups.

This year, the project focused on the neighborhood located between First and Fourth streets and between Lexington and Spruce avenues in Altoona.

“It benefits all members of the community, but especially those who live within this particular territory within the city,” Shildt said.

Saturday’s event attracted between 120 and 125 volunteers, including athletic teams and service groups from Penn Highlands Community College, Penn State Altoona and other local schools and organizations.

“We had 115 sign up in advance, and then we had about 10 who just came out,” Shildt said. “It is awesome; that doesn’t happen very often, so we are really grateful for that today.”

For the volunteers, keeping the community beautiful and helping those in need is an important priority.

“We’re in the community, so we should give back to the community,” said Amanda Farkus, assistant director of the Penn Highlands’ Blair Center location. “I think that’s especially our mission as part of a community college.

“This is our community, and Penn Highlands is our college, so our mission is to give back and be a part of the community that we’re in.”

The volunteers worked all morning, pulling and cutting weeds, sweeping the sidewalks, cleaning up trash and debris and helping those who requested cleanup in their front yards.

Taking part in keeping the neighborhood clean showed the volunteers the impact that every individual has on the community.

“I think it’s important because a lot of people don’t know the effects of everything they do. I’ve seen some cigarette butts out today, and people don’t think about that, but that’s a small thing that is affecting their health, but also the area,” said Grace Strayer, one of the volunteers from Penn Highlands.

Those in attendance were grateful for a chance to do something to benefit the area.

“We’re thankful to be here, and it was a beautiful day,” Farkus said. “We got a lot of good work done, and I’m thankful that we could be a part of it.”

For those living in the neighborhood who are not able to do some of the outdoor work themselves, the event proved to be beneficial.

“We all have to work together to help those in our community that aren’t able to get out and do the physical labor, to help keep the city clean and make it a great place for everyone to live, work and play,” Shildt said.

The volunteers agree that being able to make an impact on the area was a special experience for them.

“It means a lot because I’m able enough to do it, and some people aren’t,” Strayer said. “It’s really important to take the time to show that you care.”