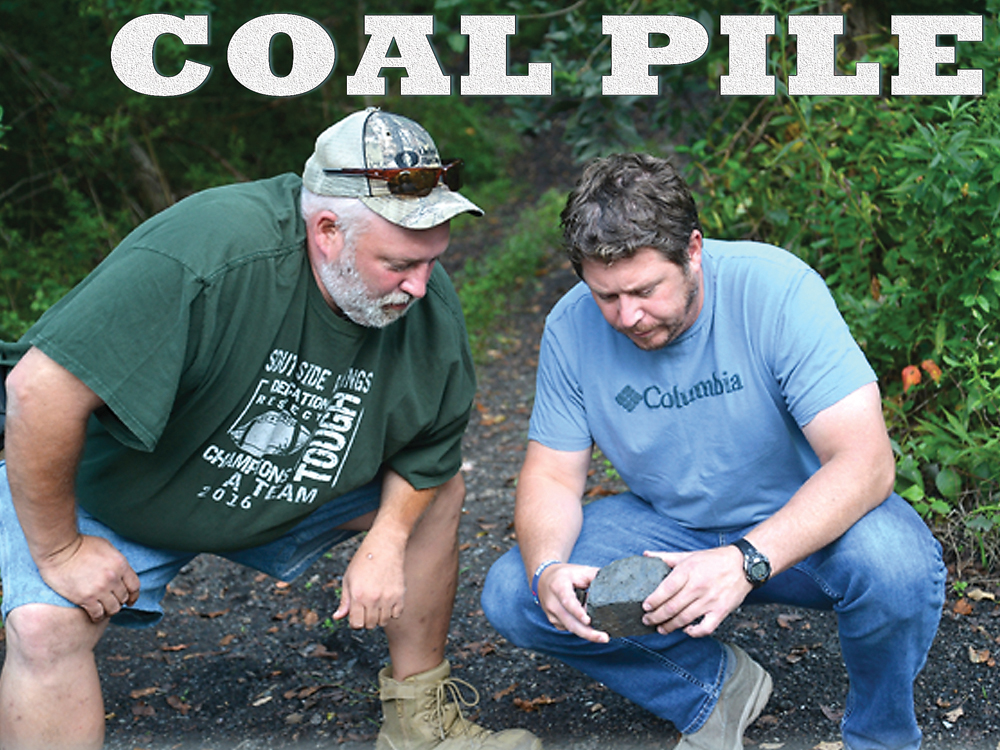 Because of the cost, the need for environmental cleanup can discourage development.

In Antis Township, however, a potential environmental cleanup could support development of a trail from Bellwood to Juniata by generating municipal funds — along with additional ground for recreation.

Antis Township officials have been planning the Logan Streetcar-First Frontier Valley Trail for three years, but only recently they noticed black, sandy soil churned up by all-terrain vehicles on a skinny wooded ridge between the Norfolk Southern mainline and Kerbaugh Road south of Bellwood, on property the township bought for the trail project two years ago.

They investigated, saw chunks of scattered coal, called in an expert and discovered the semi-mysterious remains of what may have been a coal transfer, storage and processing operation — a bony pile that may be 40 percent ash, but with enough combustion potential for marketing to local co-generation plants, plus the harvestable timber on top.

To find out whether the marketing hopes are justified, the township supervisors last week approved a “request for bids” to remove the hill — an invitation for companies to investigate the pile and, if what they find is of sufficient quality, to reclaim the 20-acre tract and pay the township royalties.

Todd Coleman of Minetech Engineers of Altoona, who volunteered to do a preliminary evaluation of the material comprising the half-mile long, 300-foot wide, up-to-70-foot high hill, estimated the material could generate 4,000 to 8,000 British Thermal Units per pound.

That is far too low for steelmaking, which calls for as many as 14,000 BTUs, and for power plant operations, which call for about 12,000 BTUs, according to Coleman.

Co-generation plants, however, generally use fuel of about 6,000 BTUs, which is in the middle of the Antis material’s estimated range, Coleman said.

Still, the cost of getting the material to a plant needs to be considered, and the trucking distance to the Robindale Energy plants in Ebensburg and Seward and the Northern Star Generation plant in Colver are probably just on the edge of economic feasibility, Coleman said.

The Ebensburg and Colver plants are about 35 miles away, while the Seward plant is 55, according to Coleman.

If a company is interested, it would do a thorough analysis — including borings — which would determine the BTU level more precisely, Coleman said.

Fortunately, the material is low in sulphur, which could help sway a company in favor of an agreement, Coleman said.

If the project gets done, timbering would be first and grading and replanting with trees — or grass for recreation — would be last, according to a township news release.

“(But) if it turns out it is not economically feasible and no one makes a proposal, the hillside will remain a tree covered edge to the new trail,” stated the release.

“This may be a great opportunity for the township to clean up a potential environmental liability and generate some income to help fund our much-anticipated park and trail work,” township Manager Lucas Martsolf said in the news release. “If it doesn’t work out, we still have a beautiful tree-covered hillside. We can’t lose.”

“I don’t think anybody at this point is seeing a huge windfall” — as in six figures, said Supervisors Chairman Bob Smith. “(But) if it turns out we’re being too guarded, that will be a pleasant surprise.”

The township hopes to build a trail from Bellwood south to Juniata, then eventually from Bellwood north to Tyrone, pointed out Supervisor Dave Worthing.

“If a small windfall (from the bony pile) helps us accelerate that, all the better,” Worthing said.

The township could earn money while doing an environmental cleanup and maybe more importantly, create recreational and even educational opportunities, according to Supervisor Tim Mercer — who envisions soccer, baseball and softball fields and maybe a place for environmental studies on the bony pile tract.

Officials don’t know how the bony pile, which is on the site of the former H.S. Kerbaugh Co. plant, came to be there.

Coleman suspects the operation there produced bite-sized coal for use on steam locomotives for the Pennsylvania Railroad.

Such an operation would have used multiple screens, Coleman suggested.

Initial screening with large openings would have “scalped off” larger pieces of rock for discard, while secondary screens with smaller openings would have scalped off proper-size chunks, perhaps 2 inches in diameter, for loading onto locomotive tenders, he said. The stuff that fell through the openings of the secondary screens for discard would be the soft shale often found with coal seams and finer pieces of coal that the railroad wouldn’t want to use in locomotive fireboxes, Coleman said, emphasizing that it’s all speculative.

The discards are what remain on the site today.

Bulldozers could have built up those discards into the current ridge. Trucks that were loaded, then dumped from a ramp could have done the same, he said.

The screens and the frames on which they sat could have been shifted around the site easily, he said.

Coleman has engineered cleanups of many bony piles, but in this region, they’re almost always found “up the mountain” — not in Blair County, Coleman said.

“We’re not in the coalfields down here,” he said. “So (this pile) is definitely an anomaly.”

The pile doesn’t seem to be leaching contaminants into the nearby Little Juniata River, so if no company is willing to pay to remove it, it may be able to stay, Martsolf and Coleman said.

The pile contrasts to many in Cambria County that are so contaminated that nothing grows on them, said township code officer John Frederick, an environmentalist.

Still, cleaning it up would have pleased the late Joe Pielmeier, an activist who used to point out the township’s traditional role as a kind of “dumping ground” for Altoona, being the site of a former landfill and various other facilities that most people would prefer not to live near, according to township code officer John Frederick, himself an environmentalist.

The cleanup could help the township’s ongoing recovery from that “legacy,” according to Frederick.

The bony pile tract is part of a 50-acre parcel that is in turn part of the Phase 2 stage of the trail, a stage that runs from Becker Road to Lower Riggles Gap Road, Martsolf said.

The township bought the parcel in November 2017 for $60,000 from Penn Rail LLC, a Virginia company, with a grant from the state Department of Conservation and Natural Resources paying half, Martsolf said.

Most of the land comprised the former Bridenbaugh farm and the rest came from the McCaulley farm, according to a 1905 Altoona Tribune article supplied by local historian Michael Farrow — the supplier of several other Tribune articles on the Kerbaugh property as well.

The company was headquartered in Philadelphia, according to an ancestry.com message board.

The company had an office at the Altoona Trust Building in town, according to a Tribune article.

The plant constructed dump cars and repaired engines initially, according to the article.

By early 1906, the plant was repairing railcars and there were plans to manufacture auto trucks, moving vans and other products, according to the Jan. 6, 1906, Iron and Machinery World of Chicago.

The complex employed up to 250 in its heyday, according to Larry D. Smith in “The Early Settlement of Antis Township,” available on bellwoodantis.net.

The Kerbaugh company’s biggest project was the $14 million construction of the Kensiceo Dam at Valhalla, N.Y., which was part of the New York City water supply infrastructure, according to Smith.

Work on that dam began in 1913 and ended in 1917, three years ahead of schedule, according The North Castle Historical Society of Armonk, N.Y. Anchored in bedrock, the dam is 308 feet high — 180 feet of that below ground — and 1,843 long, creating a reservoir of 2,200 aces that can hold 30 billion gallons of water, according to the historical society. Two tunnels pierce the dam from one end to the other — one near the top, one near the bottom — so workers can look for signs of structural damage, according to the society. The project required construction of 17 miles of rail line, an electric plant, sand and gravel pits, quarry stone crushers, cement mixers and cableways, according to the historical society. An uncertain number of workers died in accident during construction, including five when an assistant superintendent teaching a new employee how to set off explosives “carelessly demonstrated the procedure for activating the main switch” — not realizing it was live, according to the society.

In 1910, Kerbaugh himself visited the plant near Bellwood from his home in Philadelphia to discuss plans for the coming year, saying that prosperity was coming after a couple of years of “panic,” and that the plant, which repaired “locomotives, engines, steam shovels and (rail) cars,” was soon to be going “full blast” — justifying enlargement of the workforce from 80 to 225, according to a Tribune article.

In 1919, after the plant complex — 11 buildings by then, with many employee houses and 9,000 feet of rail siding — had lain unused for two years, the Poland Co. of Philadelphia, bought it to build boilers, because its home plant had run out of space, according to a Tribune article.

The Poland Co. period ended before long and the plant languished again unused until the Harris Bros. Co. of Chicago started it up again for work on locomotives, but that only lasted for a year, according to a 1925 Tribune article.

Around 1923, the National Steel Construction Co. of Altoona took over, re-equipped the plant and began to make gasoline tanks and to fabricate iron work, according to a Tribune article and a 1923 issue of the Iron Trade Review of Cleveland.

In 1925, the property went up for bankruptcy auction, after National Steel “could not manage to finance the work of production,” according to the Tribune.

The Pennsylvania Railroad obtained it out of bankruptcy in late 1925, according to the Tribune.

Sometime before 1930, the Dixon Motor Co. of Altoona bought the buildings and used the materials to construct shops of its own elsewhere, according to a 1930 Tribune article.

By 1930, the “last vestiges” of the buildings on the site had almost disappeared, according to the article.

Henry S. Kerbaugh was born in Philadelphia in 1865, worked his entire career as a building engineer and contractor, retired in 1922 and died in 1939 in Keene, N.H., where he’d lived for 15 years, according to a copy of his death certificate provided by Farrow.