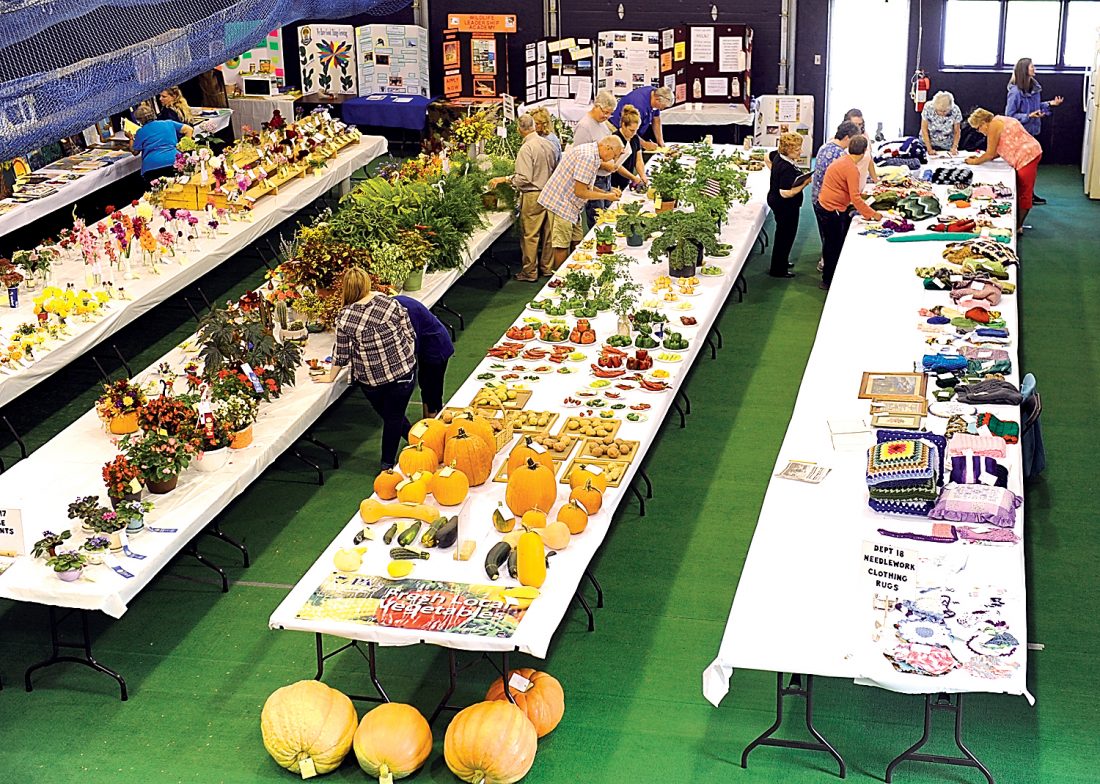 The public can visit the show Tuesday through Thursday.

The show is many things, but its primary purpose is to exhibit products that show progress in agriculture and home economics.

But a farm show is much more than that. It is a show of crops, garden produce, fruits and flowers, of fine things to eat, to wear and of objects of utility and beauty produced by home craftsman, according to the show’s web page.

“The purpose of the farm show is to show the community the stuff that people grow. You don’t have to be a farmer to participate, it can be someone who has their own garden,” said Farm Show President Apryl Smith, who has been involved with the show for more than 50 years. “We are encouraging the kids from different schools to come so they can learn a little bit about farming.

“We want you to show your stuff and get more people interested in farming.”

Numbers were down a bit last year.

“We had so much rain. It depends on the weather for vegetables and flowers. We’ve been maintaining our number of entries pretty good,” Smith said.

The Hollidaysburg show is different than others because it does not include animals.

“They did have animals at one time but haven’t had them for a long time,” Smith said. “Kids do come and ask ‘Where are the animals?’ We tell them farming is more than just about animals.”

The Hollidaysburg show is among 110 community fairs across Pennsylvania.

Linda Ickes of Osterburg has been attending the show for about 23 years.

She typically exhibits flowers, farm products such as vegetables, corn and nuts, and she makes afghans, quilts, bedspreads and clothes.

“It is a nice show. The people are friendly and you get to see the other products people bring in,” Ickes said.

This year’s show will include two master gardeners who will hand out materials and answer questions, Smith said.

The show runs through Thursday.

From 10 a.m. to 4 p.m. Tuesday, exhibits will be closed to the public as they are arranged and judged.

An Altoona man is in jail after police say he wrecked a stolen car. It’s the second vehicle 25-year-old Daniel ...

An Altoona man is in jail on felony charges after police say a woman found him in her home with her fedora in one ...

PATTON — Volunteers and the state police from Ebensburg searched for a missing Allegheny County man on Monday in ...

HOLLIDAYSBURG — The first jury trial slated to be held during the ongoing COVID-19 pandemic was canceled Monday ...

A Frankstown Township man is free on bail after police say he beat and choked a woman early Saturday. John M. ...