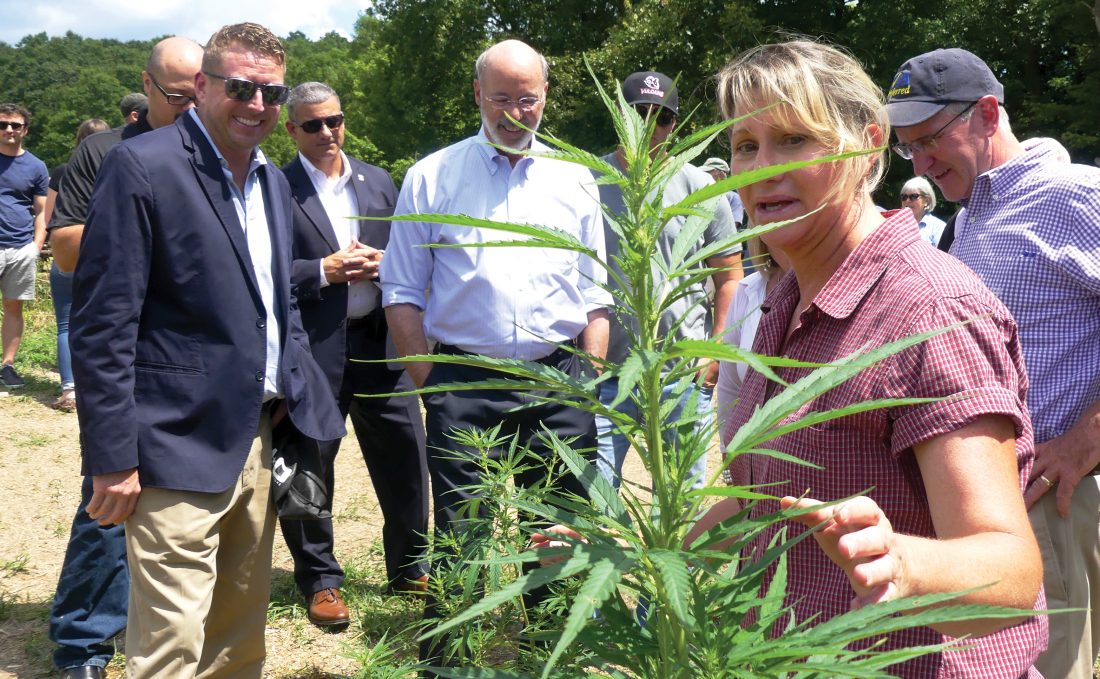 Wolf and the family who owns Cherry Hill Farms foresee hemp becoming key to sustaining farms all over the state and, eventually, new types of manufacturing businesses that use hemp materials.

For a long time, hemp was federally banned because it bears close resemblance to another cannabis plant, marijuana. However, the chemical makeup between the plants is totally different. Hemp lacks the chemical that makes marijuana a psychoactive drug.

But while visiting the Tipton Road hemp farm Friday, Wolf answered questions about the separate issue of legalizing marijuana for recreational use.

Wolf said he would pass on using it personally: “No. I prefer beer,” he said. But his administration’s recreational marijuana tour and web form show many Pennsylvanians would like it to be legal.

In addition, Lt. Gov. John Fetterman embarked on a statewide recreational marijuana listening tour over the past year.

“We are asking, ‘Is Pennsylvania ready for it?’ And judging by the answer of the people who the lieutenant governor talked to, people are definitely ready for it,” Wolf said. “I’d be happy to do what people of Pennsylvania want. At the very least, we have to decriminalize small possession of marijuana because it’s clogging up the criminal system.”

Now that the lieutenant governor has conducted his listening tour, any policy action is in the hands of the General Assembly.

Sen. Judy Ward, R-Blair, was present during Wolf’s visit to the hemp farm. After the hemp talk, she weighed in on marijuana. She is opposed to legalizing it for recreation use. It’s already legal for medical purposes.

Despite the lieutenant governor’s listening tour, Ward indicated the General Assembly would take its time on deciding whether Pennsylvania becomes counted among the several other states where marijuana is legal for recreational use.

“For anything as big as legalizing marijuana, we would have to hold hearings and do our due diligence,” she said.

Hemp, though, is a crop all can get on board with. It is part of Pennsylvania’s DNA.

Wolf reflected about how the shadow of past hemp-growing times can be seen in numerous towns called “Hempfield” that remain in multiple Pennsylvania counties.

“This was a large part of the economy of Pennsylvania in the early days,” he said.

Hemp was grown for fibers used for rope and clothing in the past. Today, those fibers can be used also for lightweight insulation in cars and for soundproofing cement blocks. But that’s not all. There are many uses for hemp fibers.

“The key is that hemp is an economic opportunity again for Pennsylvania,” Wolf said.

Now hemp is back in 55 of Pennsylvania’s 67 counties, including Blair, and the Pennsylvania Department of Agriculture has issued nearly 200 permits on more than 500 different growing locations for 2019.

But the type of hemp grown at Cherry Hill Farms as well as most others right now is not industrial hemp but medicinal hemp. Farmers want to capitalize on the new CBD market.

The CBD oil in medicinal hemp is processed and sold for use in edible and topical remedies touted for a range of health benefits from joint pain to anxiety relief.

Just like the industrial grade hemp, the medicinal grade hemp is not marijuana and does not make people high. CBD products are sold in retail stores.

Mallory was at the farm in Tyrone because he is considering purchasing plants from the farm once they are ready for harvest.

Wolf asked what he can do to encourage more growth in the hemp business.

Mallory brought samples of insulation and concrete made from hemp fibers. He suggested the state could offer financial incentives like low-interest loans to spur businesses to make those products.

“It’s a matter of financial resources,” he said.

And while farmers are getting into growing the crop, there are still many who are hesitant.

“We need to get farmers educated,” Mallory said. “A lot of traditional farmers are still sitting back and watching this.”