Cumer was a week away from completing internship 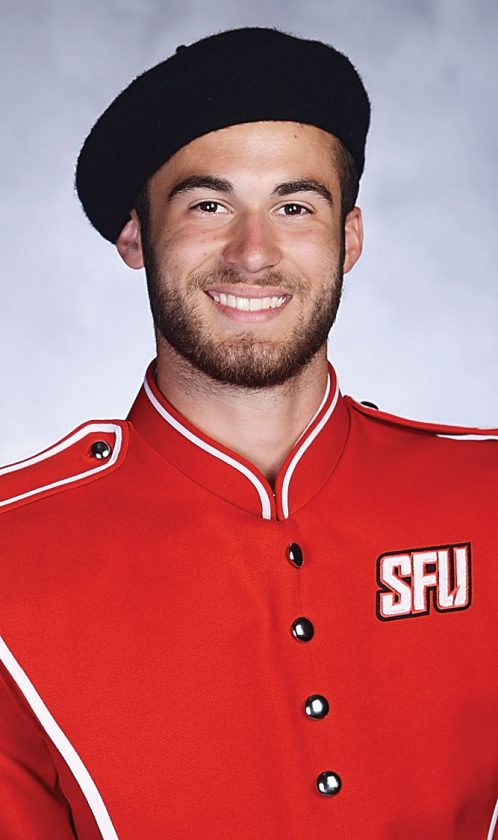 Nicholas Cumer, 25, was among nine killed in a mass shooting early Sunday morning in Dayton, Ohio.

“It is with a heavy heart that I share news that one of our students was among the casualties of the mass shooting that occurred today in Dayton, Ohio. Nicholas Cumer was a graduate student in the Master of Cancer Care program and had completed his undergraduate work with us as an exercise physiology major. He had been in Dayton as part of his internship program with the Maple Tree Cancer Alliance.”

According to Van Tassell, Cumer was “dedicated to caring for others. He was recognized at the 2019 Community Engagement Awards among students who had completed 100+ hours of service.”

“We join the nation in mourning Nicholas, alongside all of the victims of this tragedy,” Van Tassell said. “Our thoughts and prayers are with their family and friends during this most difficult time.”

Cumer was a 2012 graduate of Washington High School.

“We are heartbroken by the loss of our Nicholas in this senseless act on August 4. As our family grieves, we ask for privacy at this time,” Cumer’s family said in a statement to CBS affiliate KDKA in Pittsburgh.

Maple Tree Cancer Alliance posted on its Facebook and website that Cumer had just been offered a job. “Just last week, we offered him a full time position with us to run one of our new offices,” the post said.

Two other Maple Tree trainers were also wounded in the shooting, but they are expected to recover.

“Last night, three of our trainers were shot in the mass shooting in the Oregon District. While two are expected to make a full recovery, we are absolutely heartbroken to report that the third, Nicholas Cumer, was killed in this senseless act of violence. Nick was one week away from completing his internship at Maple Tree, before graduating with his Master’s degree in Exercise Physiology from Saint Francis University in Pennsylvania,” the post said.

“Nick is remembered for his hard work and dedication to Maple Tree. He loved his patients and served them well, with a loving and caring spirit. He continuously went above and beyond our expectations and worked with a high level of excellence. He was well liked and respected by everyone on our team, and we all will miss him very much,” the post stated.

To give staff time to grieve, Maple Tree said it was closing all of its offices this week.

“Please join us in praying for the families who lost loved ones last night, as well as those who were injured. Jesus

doesn’t promise us a world without troubles, but He does promise to be with us when troubles arise. We trust that even in the wake of great tragedy, He is working all things for the good. That is why we ask you to take a moment today to appreciate the gifts this life has to offer. Be present. Smile at a stranger. Do a random act of kindness. Do not be overcome by evil, but overcome evil with good (Romans 12:21).”

A Mass in Cumer’s memory will be held on the Saint Francis University campus this week, Van Tassell said, noting the arrangements will be shared with the public.

The university is offering counseling for community members. The counseling office may be reached at 472-3211.

The masked gunman who opened fire early Sunday in a popular entertainment district in Dayton, Ohio, was stopped in less than a minute, police said.

Connor Betts, 24, was armed with a .223-caliber rifle with magazines capable of holding at least 100 rounds of ammunition and was gunned down about 30 seconds after his rampage began about 1 a.m. in the historic Oregon District, said Police Chief Richard Biehl.

Betts killed nine people, including his sister, and wounded dozens before he was killed at an entrance to a bar where people were taking cover, Biehl said, adding that had Betts gotten inside, the result would have been “catastrophic.”

Police have not identified a motive in what was the second U.S. mass shooting in less than 24 hours.

Betts’ 22-year-old sister, Megan, was the youngest of the dead — all killed in a nightlife spot of bars, restaurants and theaters that is considered a safe area downtown, police said.

The gunman was white and six of the nine killed were black, police said. Although they’ll investigate the possibility of a hate crime, they said the quickness of the rampage made any discrimination in the shooting seem unlikely.

Betts was from Bellbrook, southeast of Dayton. Bellbrook Police Chief Doug Doherty said he and his officers weren’t aware of any history of violence by Betts, including during high school.

Brad Howard said he went to school with Betts and had known him for two decades.

Nikita Papillon, 23, was across the street at Newcom’s Tavern when the shooting started. She said she saw a girl she had talked to earlier lying outside Ned Peppers bar, where Betts was slain at the entrance.

“People my age, we don’t think something like this is going to happen,” she said. “And when it happens, words can’t describe it.”

President Donald Trump was briefed on the shooting and praised law enforcement’s speedy response in a tweet Sunday.

Gov. Mike DeWine visited the scene after earlier ordering that flags in Ohio remain at half-staff.

DeWine, a Republican, said policymakers must now consider: “Is there anything we can do in the future to make sure something like this does not happen?”

President Donald Trump denounced both shootings, saying “hate has no place in our country.” Addressing reporters in Morristown, New Jersey, the president said Sunday that “we’re going to take care” of the problem.

The shooting that killed 20 people at a crowded El Paso department store will be handled as a domestic terrorism case, federal authorities said Sunday as they weighed hate-crime charges against the suspected gunman that could carry the death penalty.

A local prosecutor announced that he would file capital murder charges, declaring that the alleged assailant, 21-year-old Patrick Crusius from Allen, had “lost the right to be among us.”

Just days before the El Paso shooting, on July 28, a 19-year-old shot and killed three people, including two children, at the Gilroy Garlic Festival in Northern California.

Sunday’s shooting in Dayton is the 22nd mass killing of 2019 in the U.S., according to the AP/USA Today /Northeastern University mass murder database, which tracks cases where four or more people were killed, not including the shooter.

While not a single event, a spate of weekend shootings in Chicago left three dead and 40 others wounded, Chicago police said. The weekend total includes four shootings on Friday, 12 shootings on Saturday and five shootings on Sunday.