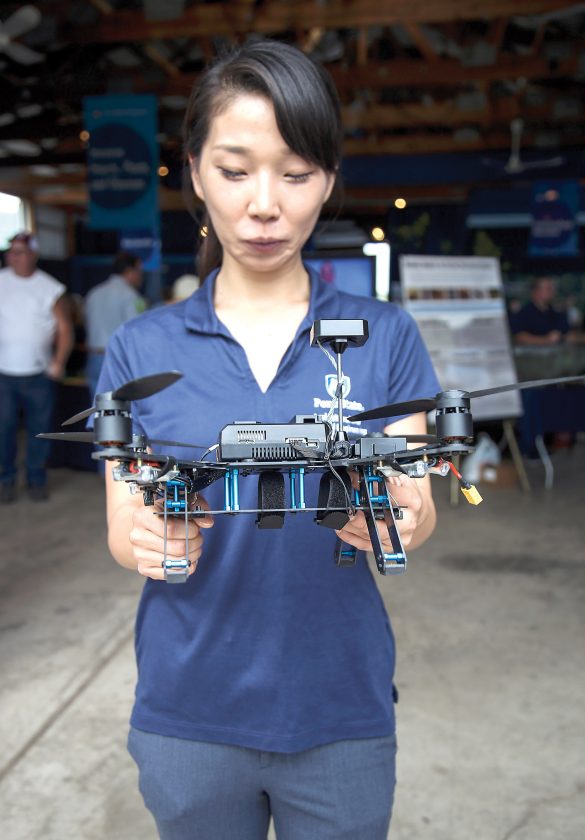 Photo for the Mirror by Ike Fredregill Drones and robots collect agricultural data for specialty crops such as fruits, which could predict and enhance yields, said Dana Choi, an assistant professor at the Penn State Department of Agricultural and Biological Engineering.

About 30 miles northeast of Altoona, gray clouds blanketed the Tuesday morning sky, and the smell of rain mingled with the aromas of deep-fried treats and barbecued meats.

While hundreds of vendors boasted new technologies, perhaps none were so far advanced as Penn State’s own agricultural engineers.

“Our goal is primarily to bring technology to agriculture and biological products and processing,” said Paul Heinemann, a Penn State professor and department head of agricultural and biological engineering. “We want to improve the sustainability of food and food production.”

His department’s corner of the building, adorned with drones, computer screens and a robotic pruning arm, appeared out of place against the backdrop of the other plant- and insect-focused exhibits.

But foreign as it might seem, Heinemann said robotics and hands-off technology are the future of agriculture.

“We’ve had tractors that can drive themselves around the field for 25 years, but the older generations weren’t really interested,” he explained. “What we’re seeing, though, is the new generation of farmers are quite eager to explore how technology can improve their harvests.”

Stepping out of the limelight, Heinemann introduced Dana Choi, an assistant professor in the ag engineering department.

“We want to use scientific data to improve the crops,” Choi said. “Usually, (ag producers) rely on experience or historical data to make decisions.”

To collect the data needed to further her research, Choi said she uses thermal sensors and standard camera feeds as well as ultraviolet and hyperspectral imaging.

“In agriculture environments, there are not many things we can control,” she said. “Light and weather can change the color of fruit on a normal camera, so we view it as many ways as possible to ensure the data we’re gathering is accurate.”

Currently, researchers are focused more on refining the process of gathering data than applying it in the field, but it’s not sitting around collecting dust, either.

“There are so many applications,” Choi explained. “Right now, we can estimate the October yield of an apple crop in July. We can use thermal imaging to see cool spots in a field, which could be heated to prevent frost damage.”

Growing up in South Korea, Choi was fascinated by how engineering could improve the country’s small-scale farm operations.

“I studied mechanical and electrical engineering for my undergrad,” she said. “But, I wanted to do something more practical. This field has so much potential.”

After earning a bachelor’s degree in both economics and bio-mechatronic engineering at Sungkyunkwan University, Seoul, South Korea, Choi trekked to the U.S. eight years ago and earned a doctorate in agricultural and biological engineering from the University of Florida. She’s worked at Penn State for about two years.

In the distant future, technology could facilitate a fully automated ag industry, she said.

“My dream is humans would no longer be involved in agricultural production,” Choi explained.

Drones could monitor the crops, and robots could apply data-driven solutions to increasing yields. Despite being surrounded by droves of ag producers reliant on human labor for income, Choi said the idea hasn’t drawn negative reactions.

“It’s difficult to find new people interested in ag careers,” she said. “Many of the repetitive tasks could be replaced by machines.”

“The future of agriculture is going to be driven by technology,” he added. “It’s reducing inputs like water, fertilizer and labor while improving production and reducing environmental impact.”

“I think we’ll see a lot more of this sort of thing,” Campbell said with a hint of caution. “It remains to be seen if that’s a good thing.”

A member of the Bellwood-Antis School Board arrested earlier this month on felony drug and stolen gun charges has ...