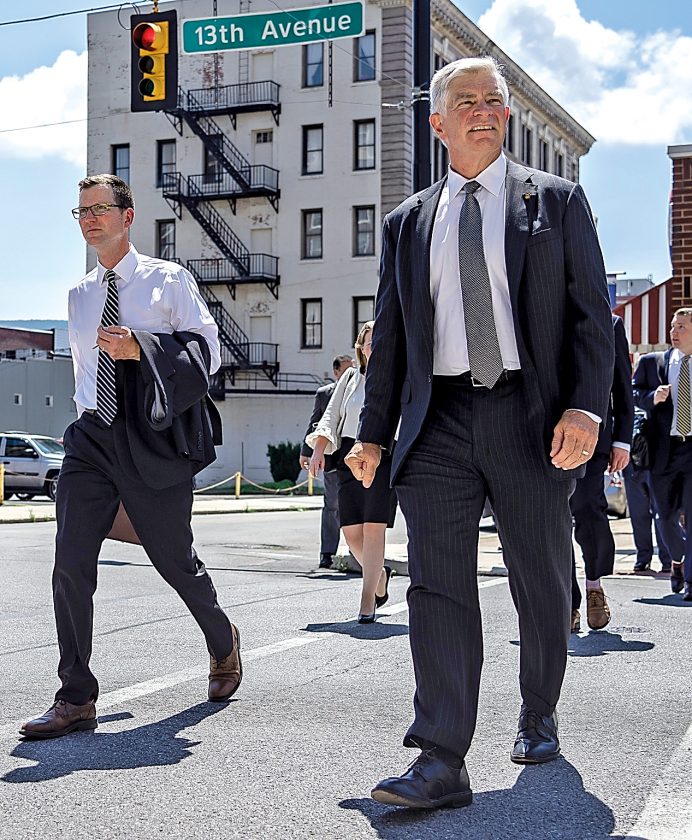 Patrick Harker (right), president and CEO of the Federal Reserve Bank of Philadelphia, and Steve McKnight, CEO of Altoona Blair County Development Corp., walk along 12th Street toward City Hall during a tour of Downtown Altoona on Wednesday morning. Photo for the Mirror by Isaac Ritchey

Patrick Harker, along with several aides, met at City Hall, then strolled along 11th and 12th avenues with Altoona Blair County Development Corp. CEO Steve McKnight, Mayor Matt Pacifico and others, checking out a variety of completed, ongoing and potential developments, including the The Clay Cup coffeehouse, JJ Hadley and Co. and the Penn Central Building.

The Federal Reserve Board, along with the Office of the Comptroller of the Currency and the Federal Deposit Insurance Corp., are working on revisions of the rules that flow from the 1977 Community Reinvestment Act.

In Altoona, Harker’s team learned that Altoona’s needs for community investment are typical nationally, Harker said after the tour.

Those include workforce development, so companies can hire the people they need, access to transportation, so workers can get to their jobs, and housing, so they have a place they can afford to live, Harker said.

Here, the need is greatest for information technology workers and nurses, along with skilled tradespeople like truck mechanics, plumbers and electricians — jobs that put those who pursue them “on a ladder of growth” that can lead “to a solid middle-class life,” Harker said.

The lack of workers with the necessary skills seems to be “the limiting factor” in economic growth nationally, Harker said.

That economic situation is “unprecedented” over the several decades during which the relevant statistics have been kept, in that there are more job openings than unemployed to fill those openings — a situation that, among other factors, reflects skill and geographical mismatches, Harker said.

Unemployment is currently about 3.7 percent, he said.

Finding ways to get people into jobs is transformational for communities, families and individuals, Harker said.

Banks can be part of the solution by lending money to businesses, schools and nonprofits for job training, and to organizations whose efforts can help with transportation and housing, he indicated.

Altoona is fortunate in having government, development organization and business leaders willing to work together, Harker said.

“That’s the seed corn,” he said. “Without that, it’s hard to make progress.”

Altoona is also fortunate in having major institutions — Penn State Altoona and UPMC Altoona — that have been willing to invest in downtown, creating “anchor” sites, according to Erin Mierzwa, the Philadelphia office’s strategic outreach and engagement officer.

The current situation calls for communities to be “creative” in seeking out and development additional opportunity, Harker said.

The local leaders were receptive to the visitors, McKnight said.

“(We) appreciate the ongoing lines of communication,” he said.

The CRA was initially designed to help “reverse the urban disinvestment from years of government policies and market actions that deprived lower-income areas of credit by redlining — using red-inked lines to set apart neighborhoods that were deemed too risky,” stated Lael Brainard, a member of the Federal Reserve Board of Governors in a speech in Washington March 12.

The last time there was a major regulatory revision, the internet was just becoming available and bank branch offices were “essential for all the deposit and lending needs of bank customers,” Brainard said.

That’s no longer the case, according to Harker.

“Banks (are) gathering deposits and making loans well outside of their physical branches — for example, online and via mobile devices,” Brainard said.

That doesn’t mean the regulations should shift focus away from neighborhood branches, but it does mean that areas for which banks are “assessed” should be expanded to reflect the broader service areas, according to Brainard.

That could eliminate disincentives for banks that might not receive credit for the good they do outside their areas, Brainard said.

Banks need to be confident they’ll get the credit, or they may gravitate to activities “they know will count,” Brainard said.

Such a change might help create a better balance between “credit hot spots” where multiple banks operate and “credit deserts,” where bank service are lacking, Brainard said.

The agencies are also considering eliminating a distinction between “lending” and “investment” assistance, a distinction that can tempt banks to structure their help in a way that’s not necessarily ideal for recipients.

That can happen if a bank is concerned about doing enough lending and so structures a deal as a loan, rather than an investment, even though the investment would be more helpful to the client, Brainard said.

HOLLIDAYSBURG — Legend has it that cats have nine lives, and, for a few select shelter cats, one of those lives ...