Trey and Lane Myers practice setting up their goats on the family farm in Bedford County. The boys actively participate with all aspects of their 4-H and FFA project show animals and can be found this week at the Bedford County Fair.

Courtesy photo Scott and son Lane Myers give Tyson the steer a bath on the family farm in Bedford County. 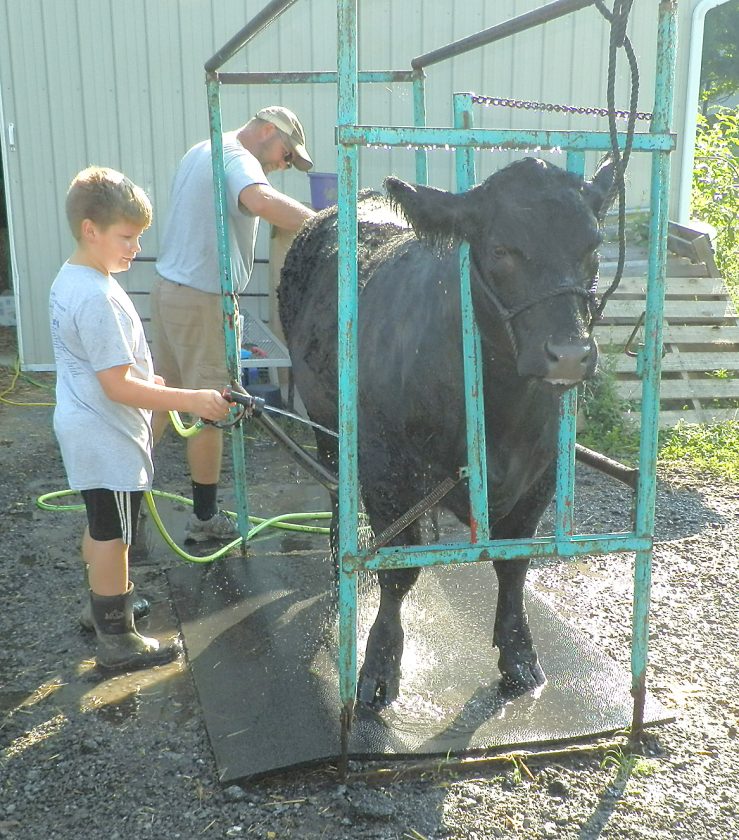 Courtesy photo Scott and son Lane Myers give Tyson the steer a bath on the family farm in Bedford County.

BEDFORD — In the heart of southern Bedford County, a tradition of teaching kids the value of hard work and determination lives on at the Myers View Farm.

Sons Trey, 13, and Lane, 10, wake up every morning and head to the barn with their father, Scott Myers, to take care of the herd, but this particular herd isn’t a typical array of livestock.

Instead, it’s a barn full of 4-H and FFA project show animals.

Trey and Lane both say they love living the life of showmen and actively participate in all aspects of the process — from being there to purchase the animals, which include sheep, goats and steers, to halter breaking them, providing them the right feeds to keep their growth on track and keeping them clean and show ready, right up through walking them into the show ring.

While the boys chatted about the various aspects of showmanship that they enjoy most, Trey said that his most proud moment was being in the final drive at the Pennsylvania Farm Show with one of his favorite show lambs. 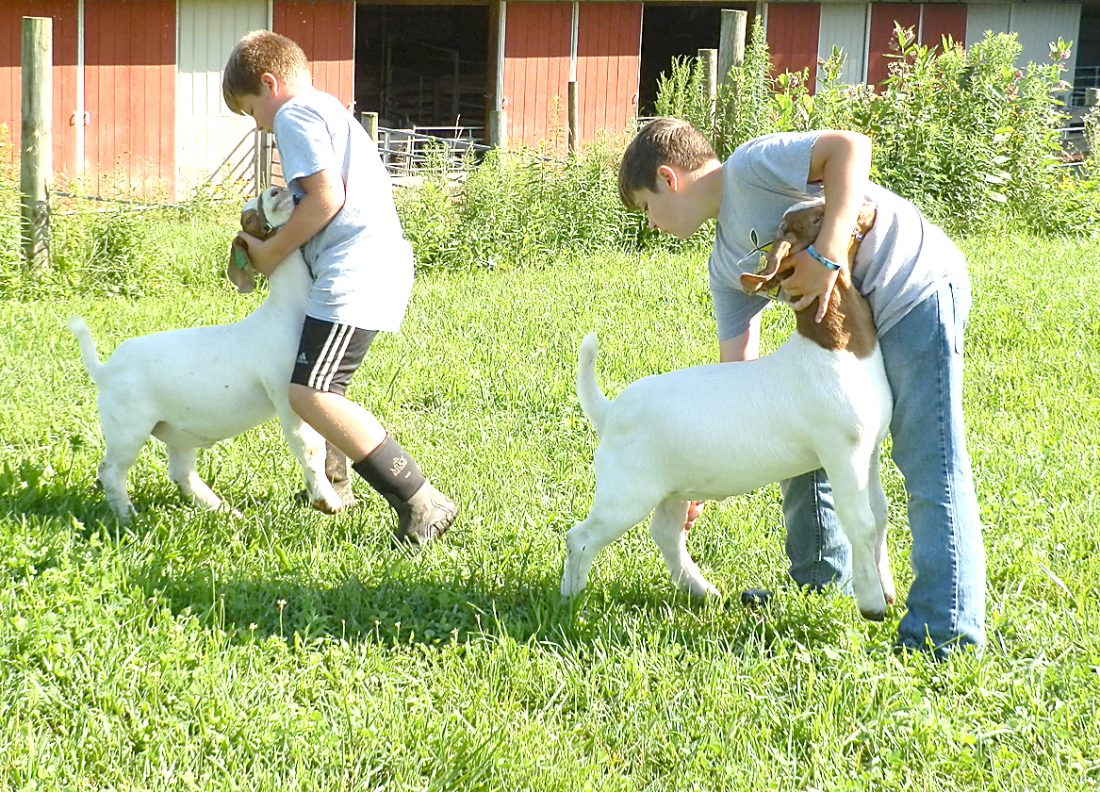 Trey and Lane Myers practice setting up their goats on the family farm in Bedford County. The boys actively participate with all aspects of their 4-H and FFA project show animals and can be found this week at the Bedford County Fair.

Lane said he most enjoyed winning county-bred champion during the 2018 show season. The boys are active members of the Young Shepherds and Stockmen 4-H Club. Both attend school in the Bedford County School District, where they are also active in sports.

Both Scott and his wife, Leslie, grew up showing animals.

While Scott was a showman in Bedford County, Leslie grew up showing steers in 4-H and FFA in Rhode Island. She now works in medical device sales but plays an active role in the family’s showmanship lifestyle.

“It’s the way we want them to grow up because agriculture is becoming so far removed from our culture that people don’t understand its importance anymore,” she said. “We want our kids to appreciate it — the work ethic, the life lessons, both hard and good, the heartache. It’s all life.”

They actually met for the first time at the Bedford County Fair, where their kids now show animals every year.

The son of Bill and Ada Myers, Scott showed lambs from the age of 8 through the age of 21. He also showed pigs for a couple of years and a steer one year. He won multiple awards throughout his showman years, including champion market lamb and champion market hog.

He says his siblings also showed animals, and he loves that his kids, along with his nieces and nephews, continue the tradition.

“Mr. Myers is one of the very best instructors I know,” Mark Bollman, administrative director, said. “He devotes countless hours on behalf of his students. They not only attend, but do very well at a multitude of competitions that he takes them to. I can’t say enough good things about Mr. Myers. He is the consummate educator.”

Bollman is excited about the value this program adds to BCTC and to Bedford County.

“Students in this program seek a wide variety of occupations or fields of study. Some recent graduates went straight into the workforce as they were offered jobs by agricultural related companies. Lampire Biological and the large-scale pork farms are two examples. Some go back to the family farm, and others go on to college or tech schools for an education in various agricultural related fields, including forestry, ag sales, veterinary medicine or animal breeding.”

Scott attended Penn State University and then taught for several years in other parts of Pennsylvania. He also spent some time working in ag sales before becoming the agriscience and biotechnology instructor at BCTC.

As the instructor for this program, he and his students work together on projects such as cloning, in which they take a small section of a leaf and put it through a sterile process in order to reproduce it.

He said the students learn a lot about ag business as well and have even made and sold goats’ milk soap and soy candles, helping them to learn about the marketing and production processes involved in ag business.

Trey and Lane say they’d be interested in careers in agriculture in the future. Both boys will be participating, along with their 4-H and FFA friends and family, in numerous shows at the upcoming Bedford County Fair, which opened Sunday and runs through Saturday.

For more information on the Bedford County Fair, including a schedule of events for the week, visit www.bedford-fair.com.