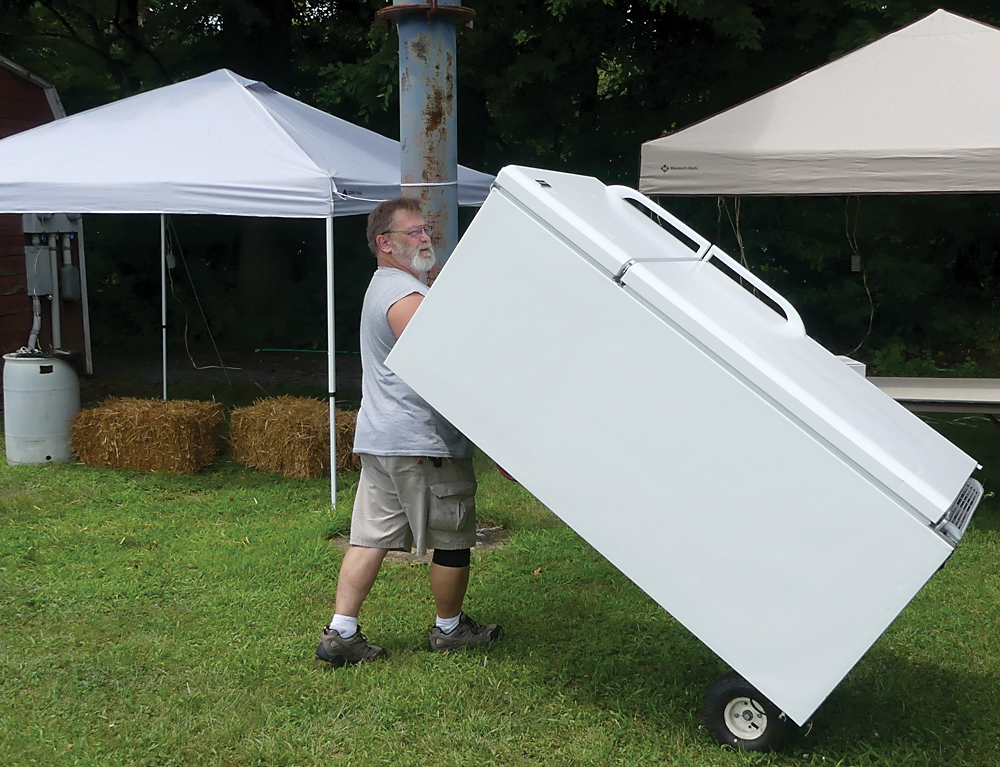 DUNCANSVILLE — Marcie Erickson lived here until junior high school, then moved with her family to another part of Blair County, but after college, she moved back to the borough.

“That says a lot,” Erickson stated Tuesday, sitting with her husband, Mike Harris, and Duncansville Mayor Lloyd Forshey at a picnic table under one of the many tents set up in the park behind Sunbrook Manor in preparation for Duncansville Community Days, which runs Thursday through Saturday.

Community Days began 37 years ago with the borough’s centennial celebration, coupled with the dedication of the park, Forshey said.

It’s happened every year since.

A fair number of those former residents take vacations so they can attend, he said.

Every community should have something like Community Days, according to Harris.

Its spirit reflects — and maybe helps create — the spirit of the town, which was on display last year after repeated flooding, according to Harris.

Everybody was offering to help, he said.

“Nobody turned anybody away,” he said.

And nobody moved out afterward — giving up on the place — despite the challenge of cleaning up, he said.

Forshey, 72, was too old for the physical labor of cleanup but went to McDonald’s for cheeseburgers, which he handed out on the street.

Forshey took over the chairmanship three years ago because he wanted to ensure the event continued for his grandchildren.

His favorite memory, however, was the 2011 version, when he was entertainment chairman and procured a Neil Diamond tribute band.

The band began with “America,” which got everyone clapping, Forshey said.

“It made me feel that the 10 months of work to put this thing together was worth it,” he said.

Two years ago, he brought in The Vogues, with original member Chuck Blasko.

The “name” act this year is the Beach Boys tribute band, Still Surfin’, he said.

Erickson’s favorite elements are the artifacts displayed by the Duncansville Historical Society, which has a “really solid collection.” One year, the society showed examples of the borough’s old wooden water mains.

One resident walking a dog Tuesday at the park

“It’s right in my backyard,” said the resident, who didn’t give her name.

“(Duncansville) is a nice, quiet community every other day of the year,” she said.

Then for three days, there’s noise, rubbish, lots of traffic — plus fireworks, which make her dogs “go crazy,” she said.

He doesn’t expect “anything crazy” this year either, he said.

It helps that there’s no alcohol and “everybody usually knows everybody,” he said.

He plans to “carry a bunch of citations, just in case,” however, he said.

Forshey begins preparing in October, lining up the entertainment.

The work grows intense in the days before the event.

There are 40 members of the committee, and all are active, he said.

The weather forecast is for partly cloudy skies and high temperatures throughout most of the event, which is the best “scenario,” Forshey said.

Full sun can actually keep people away, he said.

Some people come for all three, including families who take their dinners in the park each day, he said.

“These small (festivals) are what makes a community nice,” Ketner said.