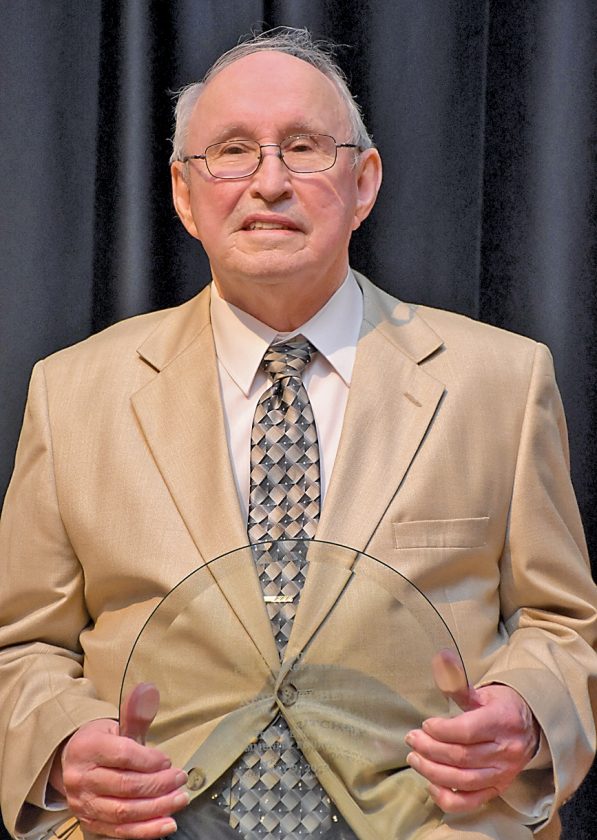 Reid Ritchey, current president of Ritchey’s Dairy, was honored in May with the Central Pennsylvania Philanthropy Award, an honor bestowed on a recipient “who has generously given of his or her resources to help better lives and build stronger communities.”

Ritchey’s Dairy has become a staple in central Pennsylvania.

Founded in 1940 by Oliver C. Ritchey, Ritchey’s Dairy is the only remaining dairy in Blair County. There is no question that Ritchey’s has made a name for itself in the dairy business; however, milk and ice cream are not the only things that the Ritchey name is recognized for.

Ritchey, 85, was honored in May at the foundation’s annual event.

“Reid Ritchey has lived his life working hard and giving back to his community,” the program stated. “His parents instilled in him the importance of a good work ethic and community support.”

Ritchey graduated from Morrison Cove High School in 1952 and went on to take classes at Penn State Altoona for two years.

His involvement in the community, however, began long before that. Ritchey began working on his grandfather’s dairy farm at the age of 10.

As a child, he was also heavily involved with the Boy Scouts and even earned the highest honor of Eagle Scout before moving on to serve as a Scoutmaster in his adult years.

Ritchey took over the dairy in 1973, following his father. He married Elizabeth, and together they had three sons.

Throughout his time in the dairy industry, Ritchey also served the community through the Pennsylvania Milk Dealers Association, serving as the association’s president.

“We would meet on a regular basis and discuss problems and ways to help the farmers and other dealers out,” Ritchey said.

Also as a way to be involved in the agriculture business, Ritchey has supported the FFA, Pennsylvania Dairy Princess and 4-H and other organizations.

Ritchey’s service doesn’t end with the agriculture industry. Throughout his life, he has served on a number of boards within the community.

He was active in the Lions Club, served on the board for the Morrisons Cove Memorial Park and Pool for five years and served on Homewood’s Board of Directors for 12 years. Ritchey has also been a large supporter of the Blair County Historical Society, the National Multiple Sclerosis Society and the American Rescue Workers.

Ritchey has also had a lifelong love of sports and has been active in supporting local sports programs, especially those for the youth in the area.

The program at the Central Pennsylvania Community Foundation’s event praised Ritchey, saying, he “believes that youth benefit from learning how to be on a team, be good teammates and how to lose or win with class.”

Over the years, he has supported and sponsored a number of the area’s baseball, softball, football, basketball, ice hockey and soccer teams. He has also participated in golf tournaments to benefit organizations like Morrisons Cove Home and Homewood.

“(The Ritchey family) has provided funding to sponsor little league teams in our area. They have purchased and donated scoreboards for a number of baseball and softball fields throughout the Cove,” Gojmerac said. “Reid Ritchey and the Ritchey family epitomize the definition of philanthropy.”

Ritchey believes serving the community is an essential component of being a leader.

“It’s important to have leaders who have the power to get things done, and when they serve the community, they can solve a number of problems,” Ritchey said.

Receiving the Central Pennsylvania Philanthropy Award was an honor for Ritchey.

“It’s given to people who have successful businesses and who give back to the community,” Ritchey said. “I’m flattered because, reading about all the people who have received it in prior years, it’s quite an honor.”