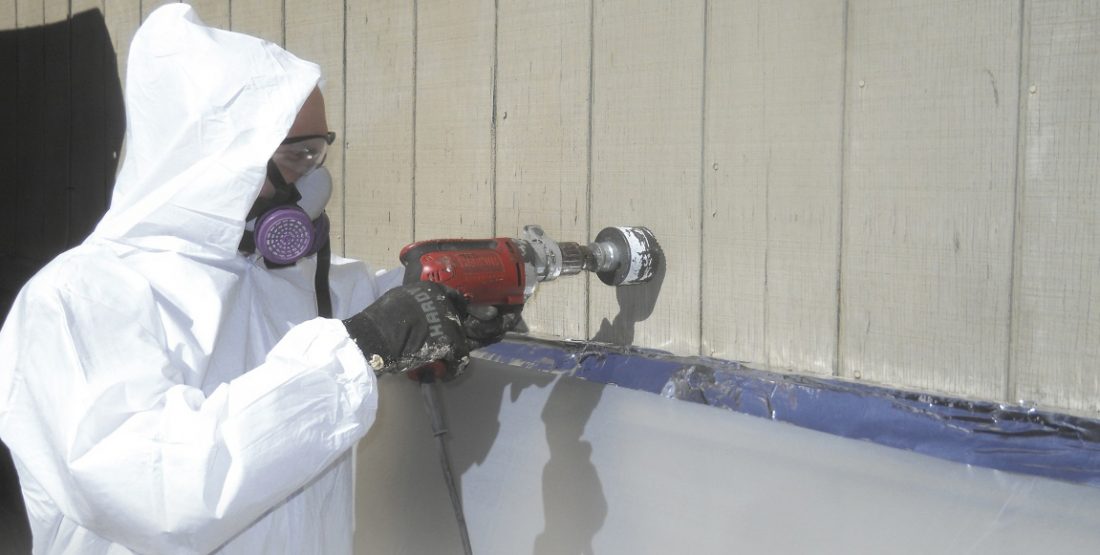 Editor’s note: This is the second in a three-part series.

Professor Samantha Radford of Saint Francis University has been studying lead exposure ever since she moved from Georgia — ever since her dog died after chewing paint off a windowsill in a house she rented in Blair County.

A few months after her dog died, Radford, who has a doctorate degree, was teaching a chemistry class at Saint Francis about testing for metals.

“For the heck of it, I thought, ‘Hey, let’s test my house for lead,'” she said. “I grabbed a few paint chips from the same place that my dog had chewed. There were definitely older layers underneath the top layer of paint. My students tested the paint, and it had huge amounts of lead in it.”

Fortunately, she and her husband by then had already signed a new lease at a different home. 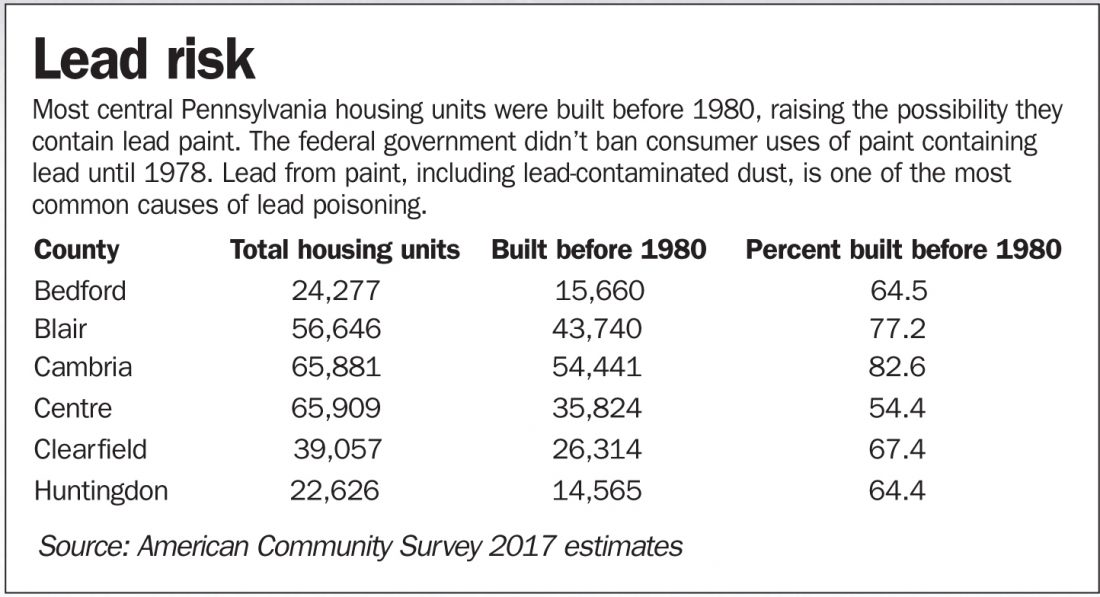 “I had the kids tested for lead, and thank God they were OK.”

Radford wrote about her experience in her blog, “The Evidence-based Mommy.”

While water can be a problematic source of lead exposure when it flows through older lead plumbing and pipes or where lead solder was used, it’s not the primary problem in Blair County.

“Honestly, the problem is these kids are being exposed well before school … in their homes,” Radford said. “I tried to say to educators, ‘Sure, you can test the water, but that’s not where it comes from in this area,'” Radford said. “To some degree, it’s doing a disservice because that’s not the root of the problem. It’s not the drinking water at all. It’s old paint.” 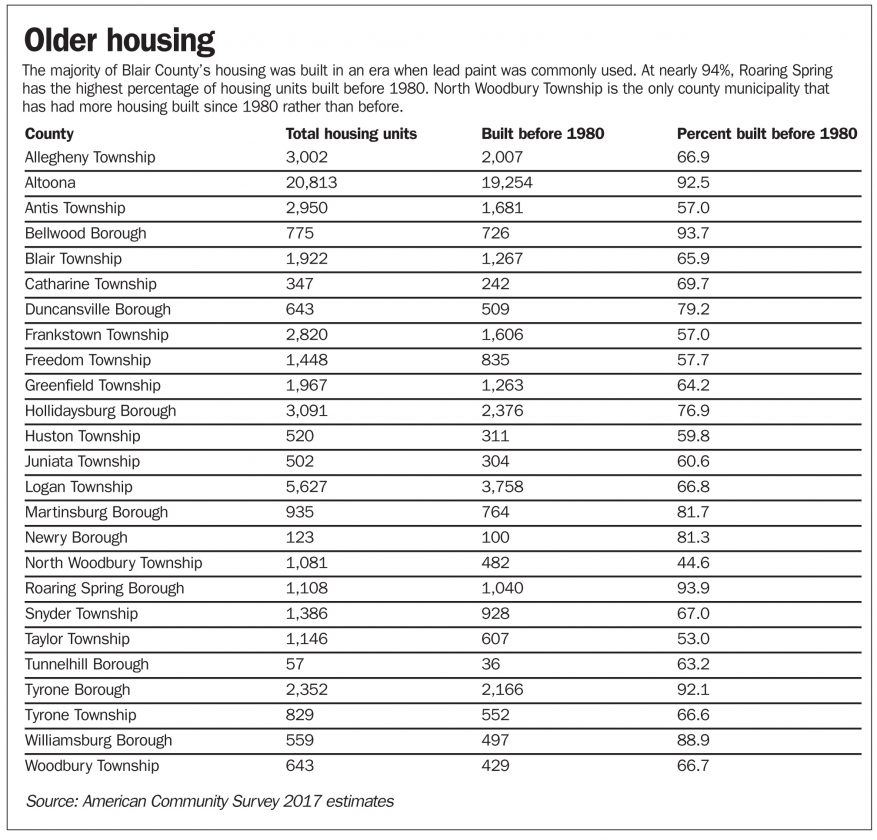 Among states with older housing stock, lead-based paint is a significant source of lead exposure in young children, according to Pennsylvania Department of Health childhood lead surveillance annual reports.

The United States did not ban the use of lead in consumer-used paint until 1978.

According to the 2017 American Community Survey estimate, Pennsyl­vania ranks fifth in the nation for the percentage of housing units identified as having been built before 1950, when lead was most prevalent.

Compared with other states, Centers for Disease Control and Prevention nationwide 2016 data shows Pennsylvania as the state with the highest rate of children with confirmed elevated blood lead levels, which the CDC defines as 5 micrograms or more per deciliter. A microgram is one millionth of a gram, and a deciliter is a tenth of a liter.

According to the CDC, there is no safe level of lead exposure.

In 2014, the state Department of Health analyzed blood lead level testing in 20 cities, including Altoona, because of their high proportion of risk factors for lead poisoning, including older housing, high proportions of children under age 7 and low income.

Altoona’s rate of children under age 7 with blood lead levels of 5 or more micrograms per deciliters was at 20 percent, or 162 of the children tested in 2014, double the state exposure rate of 9.37 percent and second only to Allentown (23 percent) on the list of 20 select cities, the department’s 2014 report showed.

At 20 percent, that’s 1 in 5 children tested from Altoona who had too much lead in their blood.

The list of cities where lead exposure could be a danger to children also included Johnstown.

Even though the percentage of confirmed elevated blood lead levels in children has decreased significantly since 2007, Altoona was named as one of those cities that “still experienced confirmed elevated blood lead levels at a rate of more than twice that of the rest of the state and 35 percent more than the state as a whole,” the department’s report stated.

City-specific data was not provided for the department’s most recent report in 2017. The number of children less than 7 years old in all of Blair County with elevated blood levels was a little more than 8 percent or about 100 of 1,220 tested. The 2017 rate for Blair is still higher than the statewide rate of 6 percent.

Exposure to lead, even at low levels, can cause intellectual, behavioral and academic deficits, according to the Pennsylvania Depart­ment of Health. Some research also links it to violent behavior.

In the late 1970s in the United States, lead was removed from gasoline under the Clean Air Act. A 2007 study published in the National Bureau of Economic Research, concluded that the reduction in childhood lead exposure in the late 1970s and early 1980s is responsible for significant declines in violent crime in the 1990s and may cause further declines into the future.

Of all of Pennsylvania’s 67 counties, Blair and Cambria are grouped with 11 others — almost entirely in the eastern part of the state — as having between 5 and

All other counties have lower percentages.

Blair County Community Action Executive Director Sergio Carmona is a contact for the State Department of Health when a child visiting a doctor’s office may have been exposed to lead.

“Any place with a housing stock older than 1978, there is just a general assumption they have lead-based paint in them. In an area like ours, it’s those homes that haven’t been kept up. Where the exterior was painted and flaking, the ground around them tends to be contaminated as well. Typically, if they have gardens, food gets contaminated. And children playing around outside have issues with lead.”

Carmona said the nonprofit has a certified lead tester.

“Every now and then, we get a call from the Depart­ment of Health to go out and test a home because a doctor suspects high lead count in blood,” Carmona said. The last time the state requested a check was years ago, however.

“So our staff goes out and does quite a few things — tests around windows. I know there has been some instances where children were affected by contaminated outside dirt. Some can be attributed to proximity to the railroad,” he said.

Just to drill a hole in the wall, Blair County Commu­nity Action staff must go through U.S. Environmental Protection Agency training to seal off the entire room where the hole is to be drilled to mitigate the possibility of lead exposure from paint.

Lead abatement is costly. Carmona previously worked for a nonprofit in California that ceased its lead abatement program because of the costs involved.

“I’m not even going to take a stab on how many still need addressed,” he said.

Currently the program serves 25 new households per year, a number driven by available federal grant funds to hire contractors for the job. Lead is addressed only if the family has children who will be living in the housing, he said.

Eligibility to the rehabilitation program is income-based. Recipients are provided a noninterest bearing loan for costs beyond $10,000.

“Because of Altoona being a railroad city and by its age, certainly that would indicate a lot of properties have lead paint in them and they do,” Fischer said.

Radford and her husband didn’t know much about lead when they moved to Blair County from Georgia and settled in an older home, which they guessed was built in the 1920s.

In an email, she said, the landlord assured her there was no lead.

“So we moved into the home,” she said — her and her husband, with their toddler and two dogs.

By the time her dog died after chewing on the windowsill, the family had already signed a new lease at a different home.

“So our landlord lied to us, and our dog paid the price,” she wrote.

Federal law requires that before being obligated under a contract to buy housing built prior to 1978, buyers must receive from the home seller any “known information” concerning the presence of lead-based paint or lead-based paint hazards in the home or building.

But Radford observed something odd about the EPA’s disclosure forms required of lessors.

Radford takes umbrage with that option.

“Of course, that means it’s in the best interest of the seller or lessor to just never test for lead. That way, they aren’t stuck having to tell everyone what they found,” she said.

The EPA encourages buyers to get a lead inspection from a certified inspector before buying.

The Residential Lead-Based Paint Hazard Reduc­tion Act of 1992 permits the purchaser a 10-day period (unless the parties mutually agree upon a different period of time) to conduct a risk assessment or inspection for the presence of lead-based paint hazards.

Parties may mutually agree, in writing, to lengthen or shorten the time period for inspection. Homebuyers may waive this inspection opportunity.

“While the cost of testing would likely fall onto the buyer, it might be worth the peace of mind before you commit to a new home,” Radford wrote in her blog.

NEXT SUNDAY: Dr. Fiona McLellan tests children for lead at her practice. Pennsylva­nia does not have a universal blood lead level testing law, so there is no mandate for children to be tested by a certain age. However, the state Depart­ment of Human services requires testing for children on medical assistance at ages 1 and 2 although compliance is not 100 percent across all providers. McLellan tests all children because of the prevalence of lead in the area.