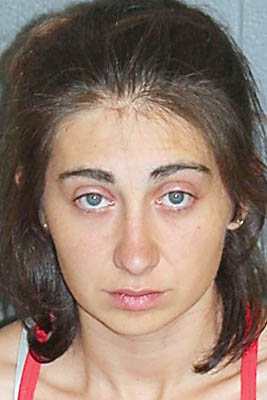 Altoona police allege a woman who drove her car into a ditch last weekend with her four young children aboard was drunk.

Ashley Grace Caldwell, 27, of Altoona faces four felony counts of endangering the welfare of a child along with a misdemeanor charge of driving under the influence after her arrest Friday night on the 3100 block of Chestnut Avenue.

According to the charges, when Altoona police arrived at the scene just after 11 p.m., Caldwell’s car was stuck in a ditch and she appeared “extremely disoriented and confused,” had bloodshot and glassy eyes, “was thick-tongued” and smelled of alcohol when she spoke.

Police said Caldwell had her four children — ages 1, 3, 5 and 6 — with her but only had three child car seats in the Chrysler sedan.

Caldwell allegedly told officers she was returning from Walmart on Plank Road and she thought she was on 17th Street. She said she was looking for 12th Avenue and her GPS told her to turn into the driveway, where she got stuck in mud.

Police noted in the charges that Caldwell “kept changing and jumping around with her story, making it confusing and hard to follow.”

After failing to complete a field sobriety test, Caldwell was taken into custody. A preliminary breath test showed her alcohol level to be 0.155, according to the charges.

Caldwell was released on an unsecured $15,000 bond Saturday morning after her arraignment and is scheduled to appear at Central Court on June 19 for a preliminary hearing.