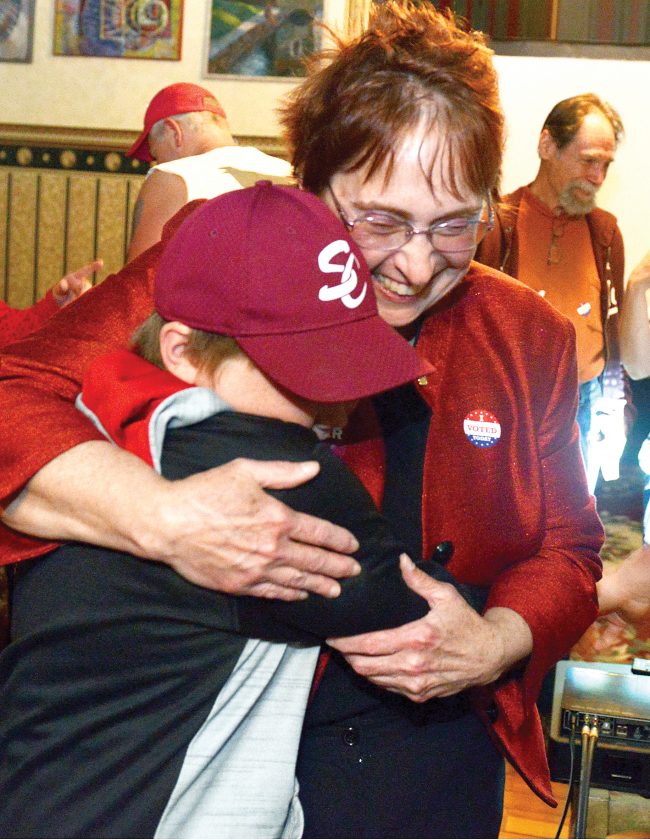 HOLLIDAYSBURG — The group inside Amy Webster’s living room started cheering Tuesday night when election results showed her as the Republican candidate with the most votes for a seat on the Blair County commissioners board.

Reassessment, which had been the main focus of Webster’s campaign, was clearly a factor with Republican voters who supported her candidacy and left the second nomination in limbo until Friday when absentee ballots will be counted.

“That’s amazing,” Webster said as she reviewed results showing her as the frontrunner of six Republicans.

Vying for the second nomination are candidate Bruce Kelley of Altoona, who ended the night with 5,694 votes and incumbent Bruce Erb of Hollidaysburg who had 5,691 votes — a difference of three votes. It’s likely the closest commissioners race in Blair County history.

Absentee ballots, to be counted Friday, are expected to decide which Bruce wins to run in the November election with Webster, who had 7,657 unofficial votes.

“I’ll be at peace either way,” Erb said Tuesday night at the Unter Uns Club in Altoona where he and his campaign supporters gathered.

“This isn’t over yet,” supporters told Erb as the campaign party started to wrap up.

Kelley’s supporters, who gathered at the Buccinese Club in Altoona, also remained supportive.

“I’m not declaring myself a winner,” Kelley said at his campaign party where he acknowledged his surprise at Webster’s success. “My gut was telling me that Bruce (Erb) was going to be leading the ticket and that the contest would be between me and Amy (Webster).”

The other three candidates on the Republican ticket were Debra Weston of Tyrone, with 1,573 votes, Joseph Zolna of Altoona with 1,372 votes and Chuck Gojmerac of Roaring Spring with 1,239 votes.

On the Democratic side, only two candidates sought their party’s pair of nominations. Laura Burke of Hollidaysburg received 3,215 votes and incumbent Ted Beam Jr. received 2,836 votes, unofficial results show. Both will be on the November ballot.

Members of the Blair County Taxpayers’ Alliance, formerly known as Blair County Citizens Against Reassessment, were pleased with Webster’s success.

“We said a long time ago that if we couldn’t hold the county leaders accountable in court for reassessment, then we would hold them accountable at the ballot box,” alliance spokesman Richard Latker of Hollidaysburg said. “Initially, our group backed reassessment too, but that was before things went sour … and it became clear that reassessment had been woefully and unlawfully mismanaged.”

“Those are the voters we appealed to,” Latker said, “the ones who were hurt by reassessment and shut out of the appeals process.”

Erb and Kelley acknowledged reassessment as influential in Tuesday’s results.

“And I didn’t have $85,000 to spend,” Erb said in reference to a campaign report filed by the Blair County Taxpayers’ Alliance.

Latker said his organization spent some of its money to campaign for Webster but not all of it.

“We will be active in the fall election and our activities will not benefit Mr. Beam who continues to parrot the fictional narrative of the reassessment company,” Latker said.

Beam, who was attending Erb’s campaign party, said he intends to raise money and campaign too.

“I think there are a lot of people who understand that reassessment was needed, and that there are ways to address the mistakes,” Beam said. “I’m hoping the majority of voters realize that.”

“Clearly, some injuries from reassessment have not healed,” Kelley added. “And you can see why county commissioners around the state have traditionally been reluctant to do a reassessment.”