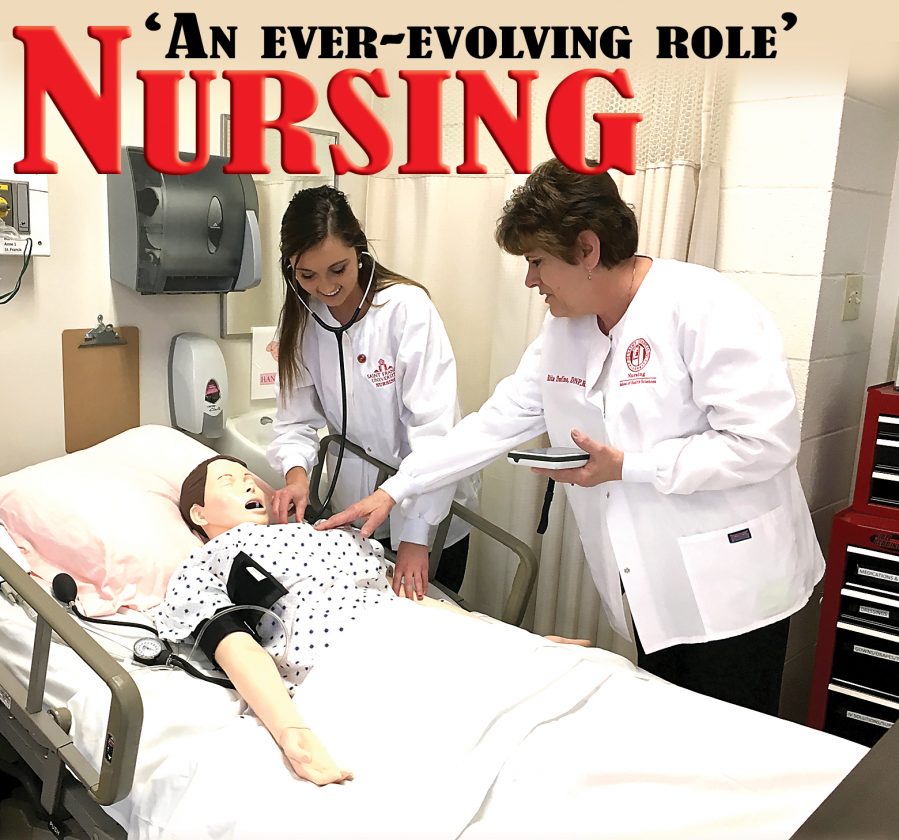 Fourteen years ago, registered nurse Amy Cornell of Cresson graduated from the Greater Johnstown Career and Technology Center as a licensed practical nurse. Her educational journey will end with a master’s degree in 2021.

“A master’s in nursing with a clinical nurse leader specialty is setting me up to work in nursing education,” she said. “It positions me well so I can go in a number of different directions.”

Varied educational options and a high demand make nursing a popular career choice. But educational requirements are changing, and schools are adapting.

After becoming an LPN and working full time, Cornell obtained an associate degree in 2008 and a bachelor’s degree in 2015.

“I planned on becoming a registered nurse eventually,” she said, “but the rest of it wasn’t exactly planned.”

– A diploma school such as Conemaugh School of Nursing in Johnstown to become a registered nurse.

– A four-year bachelor’s degree that includes general undergraduate and nursing-specific courses with supervised training in patient care within a health care setting.

Enrollment in the Penn State Altoona Nursing Program has risen during the past few years, according to assistant teaching professor Sharon Lacue, who has a doctorate in nursing practice.

“Since the transition from an associate degree to a bachelor’s degree program, our enrollments have experienced an increase,” Lacue said. “We also have an accelerated Second Degree Nursing Program that generally enrolls around 40 students per year. These students come to us having already earned a bachelor’s degree in another discipline, have all course requirements completed except nursing.”

“The students take the nursing courses over four consecutive semesters and graduate with a BSN in 16 months. Students in the Second Degree Program generally come from farther distances to participate in the curriculum,” Lacue said.

This fall, Mount Aloysius College will add a second degree program, a 3.5-year path designed for students who have a bachelor’s degree in another field.

“We are very excited to be adding a unique accelerated pre-licensure BSN program to our cadre of nursing programs (2+2 ASN and RN-BSN). This innovative 3.5-year program expedites the entrance of new nurses into the profession with a bachelor’s degree. The unique component to this program is that nursing course work is completed in 17 months,” said Julie Luetschwager, dean of the School of Nursing.

At UPMC, Chief Nursing Officer Stacey-Ann Okoth said she was “very surprised” to find that many city nurses have spent their entire careers — 30 or 40 years — at its facilities.

The average age of a UPMC Altoona nurse is 42 years and reflects about 70% of its staff, said Okoth, who also serves as vice president of patient care services.

In anticipation of future need, Saint Francis doubled to 40 the number of students accepted into its program. Hospital systems like UPMC, would like the university to take more undergraduate students. But, Trofino said, they have to have enough slots for those nurses to complete clinical rotations.

Another hinderance is a shortage of graduate-level trained nursing faculty.

According to an article earlier this year by the American Association of Colleges of Nursing, the rate of new nursing graduates isn’t sufficient to replenish the workforce. At the same time, the nation’s population is aging and requires more care givers. A further complication, said Trofino, is that undergraduate nursing schools are turning away nearly 60,000 applicants because of a nursing faculty shortage.

Retirements are also hitting an estimated 3 million nurses in the United States The country will need to produce more than 1 million new registered nurses by 2022 to fulfill its health care needs as estimated by the American Nurses Association.

UPMC offers incentives for nurses who obtain bachelor’s and master’s degrees, such as a higher payrate and sign on bonuses. Okoth said the UPMC system is “transitioning” to a bachelor degree or higher nursing force from a mostly associate or diploma-degree nursing staff.

Earlier this month, Saint Francis graduated 27 nursing students from its four-year program. All secured employment prior to graduation, Trofino said, noting it is also “very proud” that 100 percent of its nursing students have passed the national board exam on the first try — the only Pennsylvania school to accomplish the feat in five consecutive years.

Recent SFU graduate Madison Maslonik of Patton said earning her advanced certification in life support and her summer work at UPMC Altoona made her highly recruited, including by UPMC Altoona. In the end, Maslonik accepted a position in an ICU at a large teaching hospital in West Virginia and starts July 15.

Maslonik said she chose the WVU-affiliated hospital because she knows several SFU alumni working there who spoke highly of the learning opportunities offered.

For Cornell, inspiration for a nursing career came from her aunt Pamela Hughes, a retired LPN who worked at the Ebensburg Center.

“She retired from there. She is one of my heroes. She was a strong, independent woman and a woman to look up to. She was smart and compassionate,” Cornell said. “It takes a special person who has compassion, quick and critical thinking skills. You definitely don’t go into it for the money and it’s not for everyone.”

In addition to her hands-on patient care, Cornell serves as a preceptor for the many nursing students who are “doing their clinicals” in the final year before a bachelor’s degree is awarded.

In Blair and Cambria counties, like other rural areas, nurses are in greater demand as opposed to Pittsburgh and Philadelphia where a high number of nursing programs and hospitals mean the nursing job market is “very saturated,” according to Okoth. Many nurses in those regions, Okoth said, go elsewhere to gain initial experience after completing undergraduate studies.

In this area, nursing opportunities abound for recent graduates who have a four-year degree. Okoth finds hospitals vying for employees against specialized nursing providers such as home health services, outpatient clinics, short-term and long-term care, as well as travel nursing and nursing informatics, new areas of specialization. No longer are a nurse’s choices limited to inpatient care or schools.

In travel nursing, a nurse works for an agency or other company and fills in at hospitals around the country — going to the job openings. The rate of pay is higher to compensate for time spent away from home and family. Travel assignments vary in duration and may be weeks or months.

Nursing informatics is a growing specialty area where a nurse combines clinical skills with technical knowledge to create systems to improve quality of care for patients.

“Nursing is an ever-evolving role,” Cornell said. “It’s hard to stop learning. Everything keeps changing, the medications, the treatments and the patients’ acuity has changed, too. We see a lot sicker patients now than we did when I first started. Ten years doesn’t seem like a long time, but the amount of change that’s taken place in those 10 years is huge.”

Cornell’s witnessed the transition to electronic medical records from paper charts and technology advances in monitoring critical care patients’ conditions at the bedside.

When Cornell attended the Mount, she learned to insert an intravenous line into the dummy “patient.” Today’s labs are even more sophisticated as the “patients” are programmed to mimic different patient scenarios to test various skills.

Before simulation labs, Trofino said, nursing students practiced on each other to a greater extent.

“I never felt like I didn’t know what I was doing with a patient,” Maslonik said. “The simulation lab really prepares you to think through different scenarios.”

This hands-on lab experience combined with the ICU experience she gained under Cornell helped Maslonik discover she enjoys the fast-pace of an intensive care unit, including interactions with a patient’s family.

An FNP focuses on the diagnosis and management of acute and chronic conditions with an emphasis on disease prevention and health promotion. SFU’s Master of Science in Nursing Leadership and Education track is specifically designed to prepare registered nurses to develop leadership and educational skills for teaching future nursing students or managing the administration of health care.

The new offerings build on SFU’s undergraduate BSN program, which was ranked among the best nursing programs in Pennsylvania for two consecutive years, Trofino said.

“The Mount is the highest producer of registered nurses,” for the city hospital, Okoth said.

UPMC and the nursing profession are shifting to a “preference” for a bachelor’s degree for floor nurses and to a master’s degree level for nurses in leadership positions, such as a nurse manager.

For nurses like Cornell, tuition reimbursement and the ability to work while earning a degree works well.

Cornell, who began her nursing career as an LPN, said she doesn’t have regrets about her educational journey because being an LPN provided her with a “good start and an opportunity to start earning money faster. I knew (LPN training) would take a year and I’d start with a decent paying job. Then, I could go back and get my associate’s degree,” she said. “If I could go back in time, I might go straight for my bachelor’s. It seems like it would be easier and I’d have a lot less debt. But I don’t know if having less debt would be worth all the experience I’d be losing. I had a lot of valuable experience and I don’t think I would be willing to give that up.”

Registered Nurse Diana Muller, 30, of Central City, Somerset County, was one of the older students in the 2018 class at Conemaugh School of Nursing. She works in the stroke unit of Conemaugh Memorial Medical Center in Johnstown, but 10 months post-graduation finds Muller interested in obtaining a bachelor’s degree in nursing.

It would complete a journey for a four-year degree she began years ago.

In 2011, Muller withdrew from a four-year college shortly before completing a psychology degree. She then became a registrar in the Emergency Department of Somerset Hospital and discovered her passion.

“I watched the nurses bustling around, helping people during the worst moments of their life, and I knew that’s what I wanted to do,” she said. “From the time a patient walks in the door, the nurse has his life in her hands. The nurse drives the patient’s experience and does whatever is in her power to help the patient make it through.”

The Southern Cove/Yellow Creek Ministerium is providing a virtual baccalaureate service for the seniors at Northern ...

Correction: Attorney Richard L. Ducote of Covington, La., has clarified that a lawsuit he filed on behalf of an ...