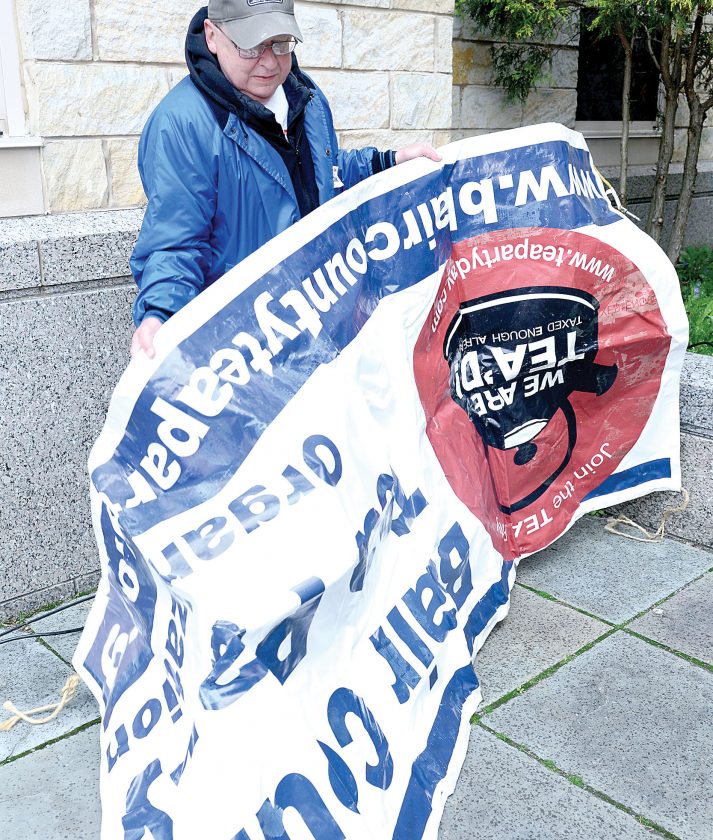 Mirror photo by Gary M. Baranec Don Keller, a member of the Blair County Tea Party Board of Directors, folds up a banner the group used during a rally at the Blair County Courthouse on Monday.

HOLLIDAYSBURG — The Blair County Tea Party marked its 10th anniversary Monday with a rally on the courthouse patio, the same location where the group assembled a decade ago.

While the original event drew about 400 people and Monday’s drew only about 20 — both on cold and damp weather days — the group’s cries for liberty and less governmental intervention remain the same.

“Our government exists to serve we the people, not the other way around,” retired state Rep. John McGinnis of Altoona told those at Monday’s rally.

Gun rights are always under attack, so be vigilant, Sheriff James Ott reminded the group.

“We want our law-abiding citizens to keep the weapons they’re allowed to have,” the sheriff said.

An estimated 350 tea party rallies in 43 states were scheduled on Monday, coinciding with the deadline for submitting 2018’s tax returns. The national and local theme was “Stop Socialism, Choose Free­dom.”

The theme developed from President Donald Trump’s State of the Union address when he declared that America will never be a socialist country, Jenny Beth Martin, co-founder and national coordinator of the Tea Party Patriots, explained in statements about the pending rallies.

“Socialism is a very real, rising threat in America that we can no longer ignore,” Bedford County businessman and retired U.S. Coast Guard Capt. Art Halvorson said Monday on the courthouse patio. “This rally marks our stand against it.”

Halvorson acknowledged that capitalism isn’t a perfect system and that reforms are long overdue. But he also urged everyone to embrace Trump’s declaration that America will never be a socialist country.

“Capitalism has done more to lift the world out of poverty than any other economic system ever devised, Halvorson said. “Over the last 25 years, the spread of policies that promote economic freedom has cut the global poverty rate by two-thirds. While imperfect, it’s still the best system yet designed to do the most good for the most people.”

Socialism, according to Halvorson, is “a patently false, intellectually dishonest, fake, dystopian dream. … It is snake oil, and it takes a blowtorch to prosperity.”

To enhance that description, Halverson included a joke: “What did socialists use before candles?”

When Blair County hosted its first tea party rally in 2009, attendees came with signs that included “Hey you Gov, You work for U.S.,” and “Washington, please leave us alone.” One man came with tea bags wrapped around his ears. Those at Monday’s rally had no signs and or tea bags. But they dressed in coats, gloves and hats to remain comfortable during the half-hour rally.

McGinnis said the Blair County Tea Party, in the last decade, has embraced a mission of trinity of spirituality, education and politics.

“We cling to our Bibles and guns, not out of any fear,” McGinnis said, “but in a steadfast and fervent effort to stand up for the sanctity of human life and the dignity of personal liberty.”

“We have seen honorable and determined candidates emerge for the challenges of school board, municipal office, state office and federal office,” he said. “All have taken on the dysfunctional status quo and opposed the big government machine of both major parties. “Whether elected or not, these dedicated men and women have succeeded in branding the tea party as the defender of American heritage.”