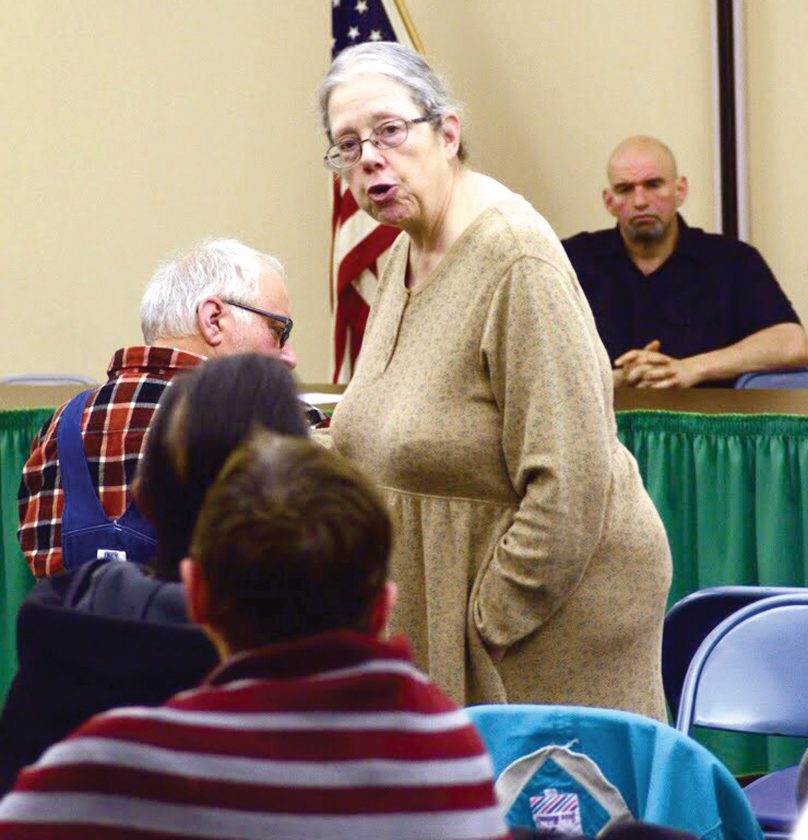 DUNCANSVILLE — When Lt. Gov. John Fetterman brought his statewide recreational marijuana listening tour to Blair County on Sunday, he received plenty of views on the hot topic, with a few undecided people turning out to hear more about the pro­posal to legalize the drug.

State and county officials joined social service agency representatives and average citizens to voice their opinion on the issue. A show of hands at the end of the meeting seemed to favor legalization, though by a narrow margin.

The event, which was held at the American Federation of State, County and Municipal Employees headquarters in Duncansville, drew about 70 attendees.

Pennsylvania already allows its citizens to use marijuana in certain approved medical cases. But as Fetterman heard, many people favor legalizing marijuana for medical purposes not yet approved because they said the list is too narrow in scope.

Several people who spoke at the meeting said the drug helps with other conditions, such as autism and chronic pain. Others said it has been used with more serious health issues, such as to ease the pain associated with terminal illnesses like cancer.

“Personally, three members of my family have died of pancreatic cancer,” said Francis Hugg of Hollidaysburg. “I have heard them scream in agony.”

One of Hugg’s relatives lived in California where medical marijuana is legal, but the type her relative used became ineffective, She said. So, her relative’s son risked being arrested to buy marijuana on the street, Hugg said.

“That’s just wrong, especially when alcohol, that causes so many innocent deaths, is legal,” she said.

Those opposed to legalization of marijuana had their stories, too.

Josh Lightner of Altoona said he thought he couldn’t get addicted to marijuana. Then he ended up with an addiction that consumed him and took over his life.

“If there’s one thing that I say here today that people remember, I want it to be this — that what might be recreational for some, is problematic for others,” he said.

Lightner said he started using marijuana to have fun with his friends, but after a while he wasn’t having fun.

“While it seemed to bring me closer to my friends, it took me farther away from myself,” he said. “The stress and anxiety I thought it relieved only increased and worsened, and left me craving more. Marijuana convinced me that it was the only way to cope with life on life’s terms.”

Other area residents who spoke in favor of legalizing marijuana said they did so because they don’t like to see people jailed for it.

David Bailey of Hollidays­burg said he personally doesn’t like it, but he is in favor of legalizing marijuana because he doesn’t like the criminalization of it. He looked up online the state prison statistics of people jailed for marijuana charges and he thinks the numbers are too high.

“We should not be arresting people for it,” Bailey said.

Blair County Sheriff James Ott said he is personally and professionally opposed to the legalization idea, which he contends is a misnomer. He claims the concept is really the financially-strapped state looking for a cash cow, another way for the state to make money.

“The state is just trying to benefit from this, trying to make money off of this,” Ott said, “so let’s call it what it really is.”

Ott also believes marijuana is what is called a “gateway drug” that gets people hooked and makes them want harder drugs. He said it doesn’t mean that every person who tries marijuana becomes an addict, but addicts start with marijuana. He also said most people don’t go to jail for a small possession of marijuana charge. People in jail usually have an accompanying charge, such as a probation violation or some other charge with it, he said.

Blair County Com­missioner Bruce Erb also voiced opposition to legalizing marijuana, saying he thinks it will cost taxpayers in what the county pays for operating child welfare services, the courts and the prison system, which are the three biggest costs for the county.

“(Those areas) are already underfunded and overburdened in large part due to the opioid crisis and the sad results of other addictive behaviors,” Erb said. “Legalizing marijuana will only worsen these problems.”

Although Fetterman has come out in support of the legalization idea, he said that at this point he’s just on a listening tour and no action has been taken on the idea. In response to Ott’s assertion that the state is trying to look for another revenue source, Fetterman said Ott is allowed to have his own opinion.

“It’s one of many viewpoints that I heard here today,” Fetterman said.