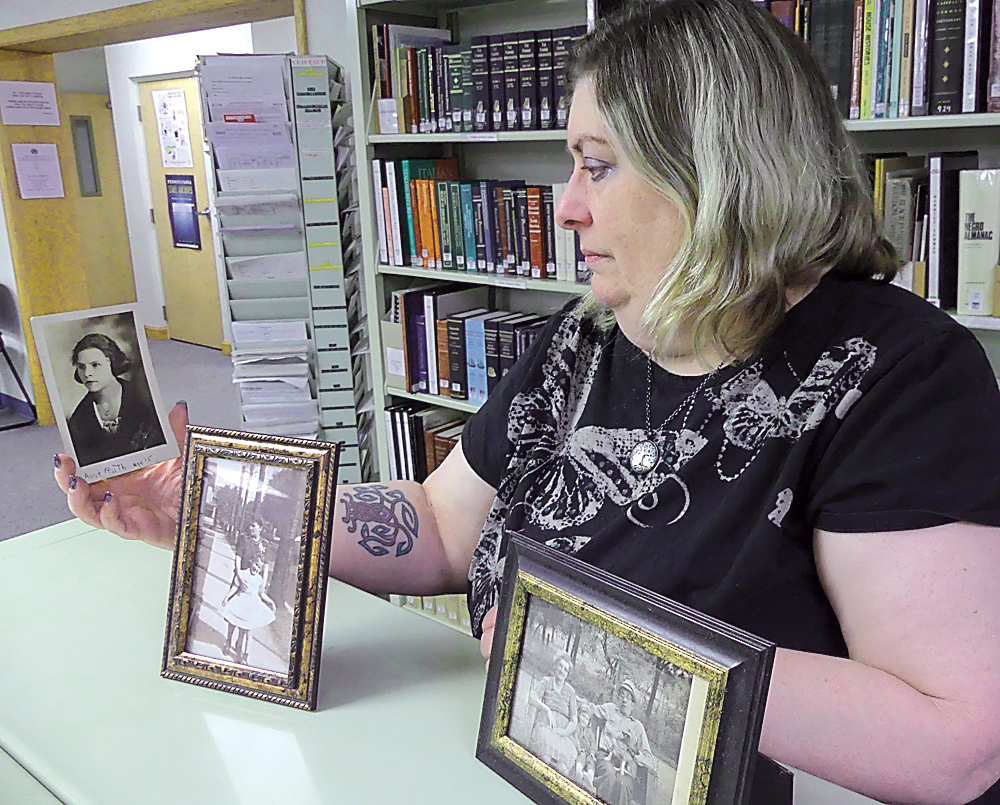 Julie Lingenfelter Moyer looks at photos of her great-grandmother, Ruth Russell Koontz, at the Blair County Genealogical Society in Hollidaysburg. Moyer used DNA testing to help figure out how Koontz came to Altoona from Chicago. Mirror photo by Patt Keith

Pittsburgh-based rockers The Clarks will perform Friday, July 26, at the Mishler Theatre in Altoona as part of the second annual Altoona First Frontier Festival. Courtesy photo

Julie Lingenfelter Moyer looks at photos of her great-grandmother, Ruth Russell Koontz, at the Blair County Genealogical Society in Hollidaysburg. Moyer used DNA testing to help figure out how Koontz came to Altoona from Chicago. Mirror photo by Patt Keith

04/13/19 By Gary M. Baranec Olivia Sapp,6, of Altoona was among dozens of children taking part in an Easter Egg Hunt Saturday morning at Baker Mansion.

DNA testing through Ancestry.com for Debra Zaffuto (center) of Ebensburg revealed that the sister she and her brother Ron Monaco (left) grew up with ­­–– Sandra Smith –– and the sister that is her DNA match, Sandra Pyne, (right) were switched at birth 75 years ago. When the switch was discovered, Smith was gravely ill with cancer, and the families agreed not to tell her before her death on Nov. 30, 2018. Photo for the Mirror by Elaine Haskins / The Courier Express

Think before you spit into that DNA testing tube and prepare for possible surprises when it comes to your family history, advises two area women and a local genealogist with the Blair County Genealogical Society.

Julie Lingenfelter Moyer, a volunteer ge­nealogist with 40 years of experience, de­scribes herself as a “spit-a-holic,” be­cause she likes to unravel mysteries when mapping family trees. “I love a good mystery and solving it.”

As a society volunteer, she’s helped many area residents understand their genetic ties, authored three family tree books and is writing a book on the Foot of Ten area. Her fascination with genealogy started in her teens when her great-grandmother Viola Forr Kennedy told family stories.

“I was blessed with knowing both sets of my great-grandparents,” she said. DNA testing has answered some questions and raised others, illustrating Moyer’s point that DNA testing is a new tool in a researcher’s search.

“It needs to be used with the other tools like personal interviews; paper trails through birth, church and death records; and historical newspaper records. The DNA is no good without the paper trail because the DNA won’t instantly solve something that you’ve been wondering about for years,” Moyer said. In her case, she couldn’t figure out how her other great-grandmother, Ruth Russell Koontz, came to Altoona from Chicago, Ill. 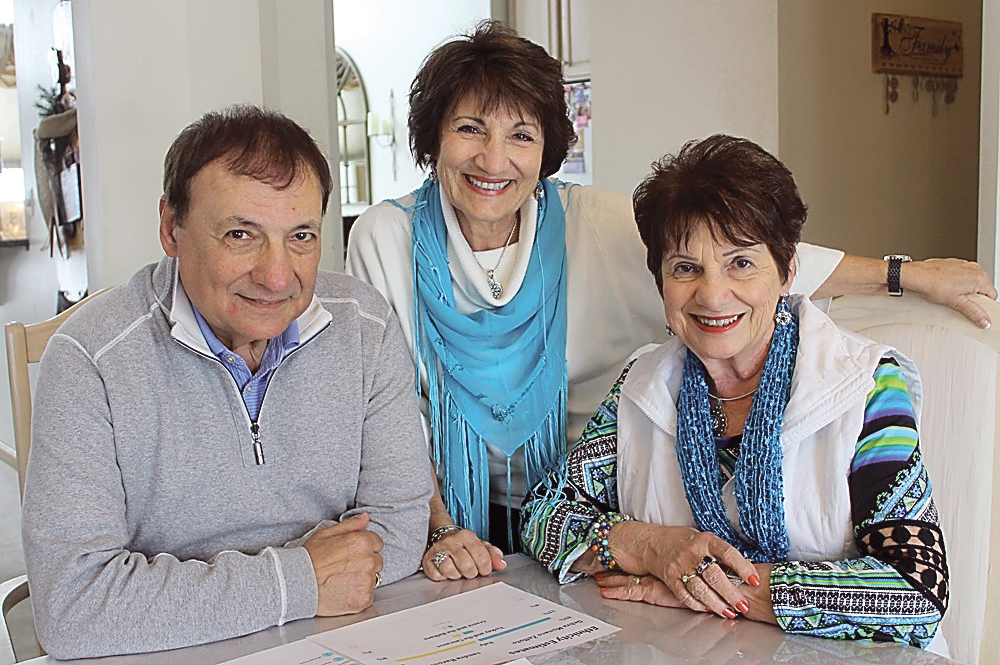 DNA testing through Ancestry.com for Debra Zaffuto (center) of Ebensburg revealed that the sister she and her brother Ron Monaco (left) grew up with ­­–– Sandra Smith –– and the sister that is her DNA match, Sandra Pyne, (right) were switched at birth 75 years ago. When the switch was discovered, Smith was gravely ill with cancer, and the families agreed not to tell her before her death on Nov. 30, 2018. Photo for the Mirror by Elaine Haskins / The Courier Express

“Something just didn’t make sense. When I did my and my mother’s DNA testing, it showed a whole group of people we were related to with the name of Morrison. We didn’t know anything about them other than they lived in Illinois,” Moyer said. “It gets very complicated. We would have never learned the answers or found these relatives without my mother’s DNA.”

It turns out Moyer’s biological great-great-grand­father Samuel Morrison was born in Altoona and fathered a child — Ruth Russell Koontz — with a married woman Bertha Brown Russell.

The DNA testing of Moyer and her mother, Kay Ken­nedy Lingenfelter, re­vealed new information — they were partially Italian. Sam­uel Morrison had been adopted by the Morrison family and was the biological son of Luigi Coglietta, Moyer’s great-great-great-grand­father. Moyer discovered this when she “matched” biologically with Coglietta’s relatives on Ancestry.com.

Finding new relatives — especially siblings — is “quite common,” Moyer said, and usually results from an adoption or an affair in a previous generation. Or in one Cambria County woman’s case, hu­man error played a role.

For Debra Zaffuto of Ebensburg, testing her DNA through Ancestry.com re­vealed the sister she grew up with — Sandra Smith — and the sister that is her DNA match — Sandra Pyne — were switched at birth 75 years ago.

Both were born on the same day and named Sandy. All parents and Smith, who Zaffuto grew up calling her sister, died without ever knowing of the switch.

“At that time, babies were just starting to be born in hospitals,” Zaffuto said. “Women were very sedated for the birth and weren’t awake until hours after the birth so the nurses often took care of the first two feedings.”

She speculates a nurse mistakenly put one of the newborns into the wrong bassinet at some point during the mothers’ weeklong stay.

“At first, it was a very stressful time until all of the tests to prove there was a switch were done,” Zaffuto said. “But now, my brother Ron (Monaco), myself and our new sister Sandy (Pyne) are happy at how things have turned out, and we are working on spending as much time together and getting to know each other better with all the time we have left.”

Zaffuto, formerly of Brock­way, had her DNA tested as both she and her husband, Barry, have explored Italy as it relates to their family trees and their Italian heritage.

Unfortunately, Smith, 76, was gravely ill with cancer when the switch was discovered. The families agreed not to tell her, and she died Nov. 30, 2018.

Since the discovery, Sandy, Ron and Debra have traveled to each others’ homes, met each others’ spouses and gotten to know each other. They shared their unusual story first with the Courier newspaper in DuBois, and it was subsequently picked up by The Associated Press.

“We didn’t expect it to go viral,” Zaffuto said. “The truth was out there, and truth is truth. We wanted to share what happened so people would know.”

Since the original interview in March, Zaffuto has learned of two 72-year-olds with nearly the same story.

“It was an act of God to find this out,” Zaffuto said. The family contacted an Ancestry representative who said few documented cases of babies sent home with the wrong parents exist in the world.

When the Mirror contacted Ancestry, public relations specialist Jasmin Jimenez replied via email, “Almost everyone who takes our AncestryDNA test find something surprising as they embark on a self-discovery journey with us and for most customers it’s something exciting and enriching. But there are certainly cases where a discovery might be quite unexpected.”

“The past is the past, and you can’t go back and change it,” Zaffuto said. “We loved our Sandy (Smith) and that hasn’t changed. We can only go forward from here. It doesn’t diminish anything; instead, we have more family — there are more plates at the table,” Zaffuto said, calling Sandy Pyne her “rest of my life sister.”

Another Ancestry customer, Penny Stoltenberg Smith, 42, of Tyrone grew up aware of her adoption at 14 months old, but her adoptive mother didn’t have many details other than a suspicion Smith might be of Native American descent.

A few months after her adoptive mother died, Smith’s husband, Tim, bought her an AncestryDNA testing kit; the results connected her to a maternal side first cousin.

“I thought it’d be cool to do and never did I think it would happen that fast and I’d be matched. Then within 24 hours of being matched, I knew everything,” she said.

Subsequently, Smith has learned she has four younger half-siblings with whom she’s connected virtually. Her birth mother’s siblings haven’t wanted to connect further.

“I understand that, and I respect it. I don’t feel bad about it,” she said. She believes those relatives would rather not discuss a difficult childhood.

Smith’s birth mother, Paula Dinsmore, lived in Ebensburg and died of a massive heart attack at age 38 in 1998. Smith’s biological father, Daniel Noll, died in an accident in 1977 when he was 18, about a year after Smith’s birth. Dinsmore, 16, gave birth to Smith in Pittsburgh. Dinsmore later had four additional children.

Prior to knowing her birth origin, Smith wondered about her family’s health history, who she looked like and where she’d received a voracious ap­petite for reading. Through DNA testing, she’s made connections and has more answers. She bears a very striking resemblance to her birth mother and her youngest sibling is an avid reader with a degree in English.

“I always felt like a balloon, somewhat untethered, and now I feel anchored,” she said. “A piece that was missing is there now. It’s cool to know, finally.”

And Smith said she encourages everyone to get tested, even if the answers don’t lead to a fairy tale ending. She hopes to learn more about her birth father’s family.

“I totally advocate for it,” she said. “The more people that get tested, the more likely the chance of getting matched.”

HOLLIDAYSBURG — Legend has it that cats have nine lives, and, for a few select shelter cats, one of those lives ...