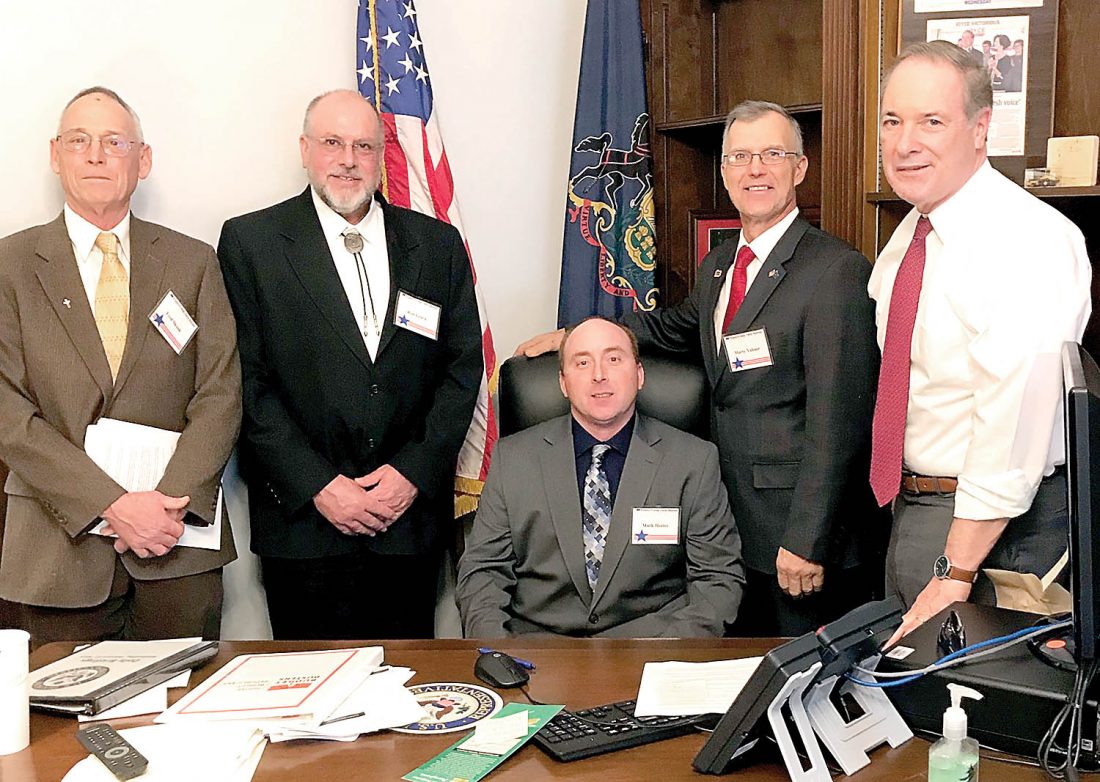 Area farmers are making sure their voices are heard in the nation’s capital.

“Pennsylvania Farm Bureau believes it is critically important for farmers to travel to Washington D.C. to meet face-to-face with lawmakers who represent them on national issues,” spokesman Mark O’Neill said.

Farm Bureau members have been traveling to our nation’s capital for decades, O’Neill said. “Historically, we have sent about 150 farmers each year from across the commonwealth to D.C. during a two-day federal affairs visit, but beginning last year, we decided to try a new approach. Instead of making one large trip, we are now making three trips per year, but sending fewer members,” O’Neill said. “The small group visits allow farmers to have a much more personal visit with lawmakers and staff. It also provides more time for farmers to engage with others in D.C.”

This year’s trip allowed farmers to talk to lawmakers about several key issues.

“The four main priority issues that we discussed were trade, specifically asking them to approve the new U.S. Mexico Canada Agreement, the need for infrastructure funding and improvements, the need for a legal, reliable work force for ag labor and the need for common sense regulatory reform,” said Marty Yahner of Patton, Cambria County Farm Bureau government relations director.

Yahner said he has been making the trip for more than 30 years.

Yahner enjoyed a tour of the capitol building provided by Thompson.

“GT gave the whole group an evening tour of the U.S. Capitol. We had the place to ourselves. He took us to places the public doesn’t get to see. As a tour guide, he told us a lot of the history. He is a down to earth kind of guy,” Yahner said.

The group met with Gregg Doud, who serves as the Chief Agricultural Negotiator, with the rank of Ambassador, in the Office of the United States Trade Representative.

Doud talked to the group about trade negotiations with China.

“He sits across from the Chinese at all of these meetings. We heard a lot of behind the scenes stories of what is going on. Hopefully a deal will get done soon,” Yahner said.

“Continued meetings like this help to keep me informed on how we can be more responsive to the needs of our farm communities,” he said.

“Agriculture is the Commonwealth’s

No. 1 industry and I know many of our farm families are struggling. Thanks to the 2018 Farm Bill, we’ve been able to provide some stability across the board for producers, especially the dairy sector which has been particularly hard hit in recent years. Farmers feed our nation and it is critically important that we continue to work hand-in-hand to support rural communities and America agriculture,” Thompson said.

“He seemed sincere and wants to help and understand our concerns. He admits he doesn’t know much about agriculture, we have to work with him and tell him about our issues. We had a very good visit,” Heeter said.

Joyce said it was exciting to have members from the Pennsylvania Farm Bureau come to visit him in Washington to discuss the important issues facing the agriculture community.

“Given that agriculture is the 13th District’s largest industry, our farmers are a priority for me. Over the course of the meeting we discussed how we can work together to expand rural broadband, reduce the burdensome regulations that are holding farmers back from growing and expanding, and facilitate beneficial trade agreements,” Joyce said.

“While I will continue to work hard to address the concerns of all of the farmers that I represent, the 13th District is home to 20 percent of the dairy farms in Pennsylvania and reviving this struggling industry will be a primary focus. Whether it be urging the Food and Drug Administration to crack down on milk imitators or cosponsoring legislation to allow whole milk back in public schools, I will continue to find ways to put our dairy farmers first,” he said.

“I believe they do. By and large you would hope all elected officials are concerned about the greater good. We can tell them agriculture issues affect everybody, we feed everybody. If farmers are put out, regulated or taxed excessively that can make food more expensive, that affects everybody,” Yahner said.

“The Republicans were more receptive; it runs along party lines,” Heeter said.

Both encourage others to make the trip.

“The world is run by those who show up. American Farm Bureau President Ziggy Duvall of Georgia said his dad once told him, ‘If you want to make a difference, get out of your comfort zone and get beyond your fences.’ That is so true. We need to be our own best advocate and get beyond the fences,” Yahner said.