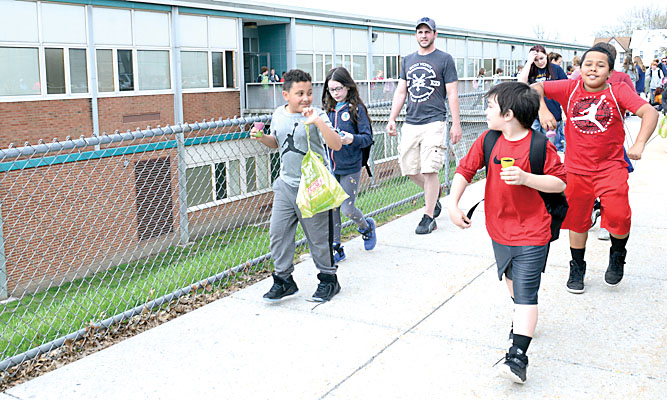 Altoona Area School District is developing a plan to transform Penn-Lincoln Elementary School into a magnet school with a focus on career development as well as science, technology, engineering, arts and math, known as STEAM.

Patty Burlingame, assistant superintendent for curriculum and instruction, said she tasked teachers to develop a magnet school concept, an idea that is in its early stages.

Teachers wrote a vision statement for the “STEAM Learning Center at Penn-Lincoln” that would provide a “student-centered learning environment where students, families, staff and community partners work together to ensure that all students are academically, socially and emotionally successful through the utilization of an instructional and learning model focused on science, technology, engineering, arts and mathematics.”

“This school has always torn at my heart,” Burlingame said. “They don’t have the same opportunities as other children.”

Burlingame said she and her four siblings were taken care of by their single mother. She knows from first-hand experience that the families are hardworking.

“I floated a magnet school idea to the teachers and they were thrilled,” she said during an informational presentation to the school board last week.

Teachers have developed goals for the community and named chairpersons, she said.

“Parents want their children to succeed,” Burling­ame said. “We can get them there.”

If the magnet school approach comes to fruition, the first three to four years it would only be open to Penn-Lincoln students.

As it develops, the school could become more of a “magnet” school with special instruction, drawing students districtwide, as the McAuliffe Heights program at Irving Elementary School currently does, Burlingame said. But that would only happen if there is room in the school for students from across the district when sixth-graders move to the junior high school in 2020.

In 1997 when Irving Elementary became the McAuliffe Heights magnet school, families of the former Irving school started to feel excluded. Burlingame said that would not happen at Penn-Lincoln.

“All Penn-Lincoln students would have the first option, regardless (of whether its opened to other students). We do not want Penn-Lincoln families to leave that school under any circumstance,” she said. “They need to know their children are special and we are doing it for their children. This is about building a sense of community for that school.”

Burlingame said teachers are planning to meet with families in May to discuss the future of a magnet school.

“We are working on sending invitations now. We needed to give teachers time to work before we presented it. We are hoping for a large turnout,” she said.

All 270 families from the school will be invited, she said.

A preliminary outline of the offerings at the Penn-Lincoln magnet school includes a morning meeting, counseling, standards-aligned curriculum that provides awareness of career opportunities in the Altoona community, family involvement, hands-on activities that focus on robotics and involvement in activities that will include after-school and parental activities.