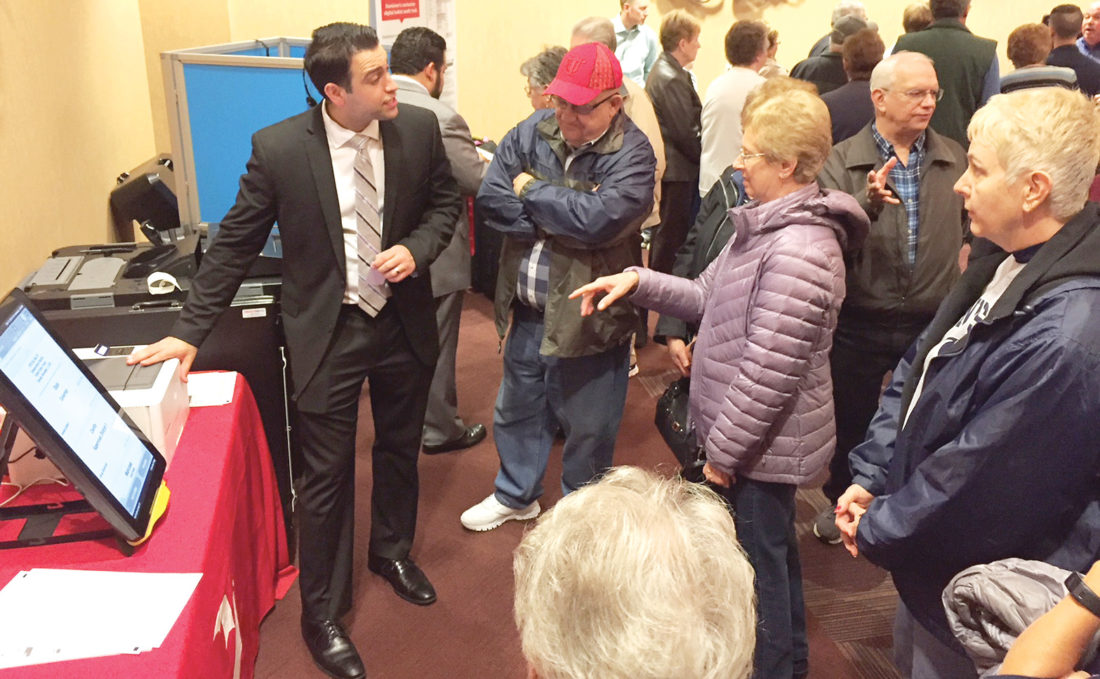 But the new voting machines will have paper verification of votes cast, allowing voters to know if the machines recorded their selections correctly, and if questions surface about vote totals, county election officials will have paper records to back up computerized totals.

Like many counties in Pennsylvania, Blair County is on edge of buying new voting equipment that voters will begin using in November.

Making a purchase now allows time for delivery and the training of precinct staff and voters on how to use the new system. It also allows time to address any problems that surface before the 2020 presidential election, the deadline for having paper-verified voting systems in place.

Blair County voters interested in seeing the kind of voting systems under consideration for purchase are being directed to log onto the county’s website, at www.blairco.org.

Videos have been posted on that website, provided by Election Systems & Solutions of Omaha, Neb., and Dominion Voting of Toronto, showing how to cast a ballot based on election systems the company is selling.

Voters can offer their input on what they like and don’t like by sending an email to county elections Director Sarah Seymour at sseymour@blairco.org. Altoona Mirror’s online readers also can post comments on the newspaper’s website.

Seymour, who has weighed the pros and cons of the systems, is recommending a purchase from ES&S partly because the company’s equipment is certified to scan as many as 120 to 180 votes an hour.

That’s cause for concern, she said, because Blair County plans to buy one scanner for every precinct.

A faster scanner, she said, should mean quicker processing and less waiting. Price is a big factor in the pending decision, too, even though the companies previously submitted specific prices to the state for inclusion in its Co­operative Purchasing Program, also known as Costars. But the companies can offer equipment to counties at lower prices than available through Costars.

About a week before Blair County’s election board reconvenes on April 2, companies will be asked to submit their last, best offer.

Election board members Greg Michelone and Robert Scholl, substituting this year for county commissioners Bruce Erb and Ted Beam Jr. who are running for re-election, said its important to pick a ballot casting system that’s easy for the voters to understand and use.

But the board members say another important factor is how how quickly the machines could repaired if a problem surfaces during an election. That factor makes ES&S a more favorable option because William Penn Printing Co., based in Pittsburgh, services ES&S equipment.

When the election board recently met, Chairman Terry Tomassetti recommended holding off on a decision to give voters a chance to weigh in on the options after reviewing company videos of the pending choices. Voters also can attend the election board’s meeting when the decision is made, set for 9 a.m. April 2 in Room 2B at the courthouse.

The selection of new voting equipment has drawn interest.

Voters who attended a demonstration of voting equipment at the Blair County Convention Center in October were asked to name which company supplied voting equipment they preferred. Results showed 20 votes for ES&S, 17 votes for equipment shown by UniSyn, a company Blair County has eliminated from the selection process, and 11 votes cast for Dominion’s equipment.

In commenting on what they saw, voters praised large ballots, privacy and the ease of use.

One of the attendees described paper verification of votes cast as a more user-friendly feature for older voters. But someone else criticized the equipment as “not-state-of-the-art-technology” and “dependent on paper.”

In other counties, some leaders have already settled on purchases.

Centre County is purchasing ES&S equipment that will require voters to fill out paper ballots that will be deposited into a scanner/tabulator. The county also will offer voters the option of a touch-screen ballot-marking device for those unable to mark a ballot. The touch-screen option provides a paper printout of choices, which the voter can review before putting it into a scanner/tabulator.

As of March 18, the state identified Centre County among 19 counties whose leaders had made a decision on upgraded voting equipment.

The state also estimates that eight to 10 counties are expected to use new voting systems in May. An estimated 32 counties, including Blair, are to be ready to implement new systems in November.