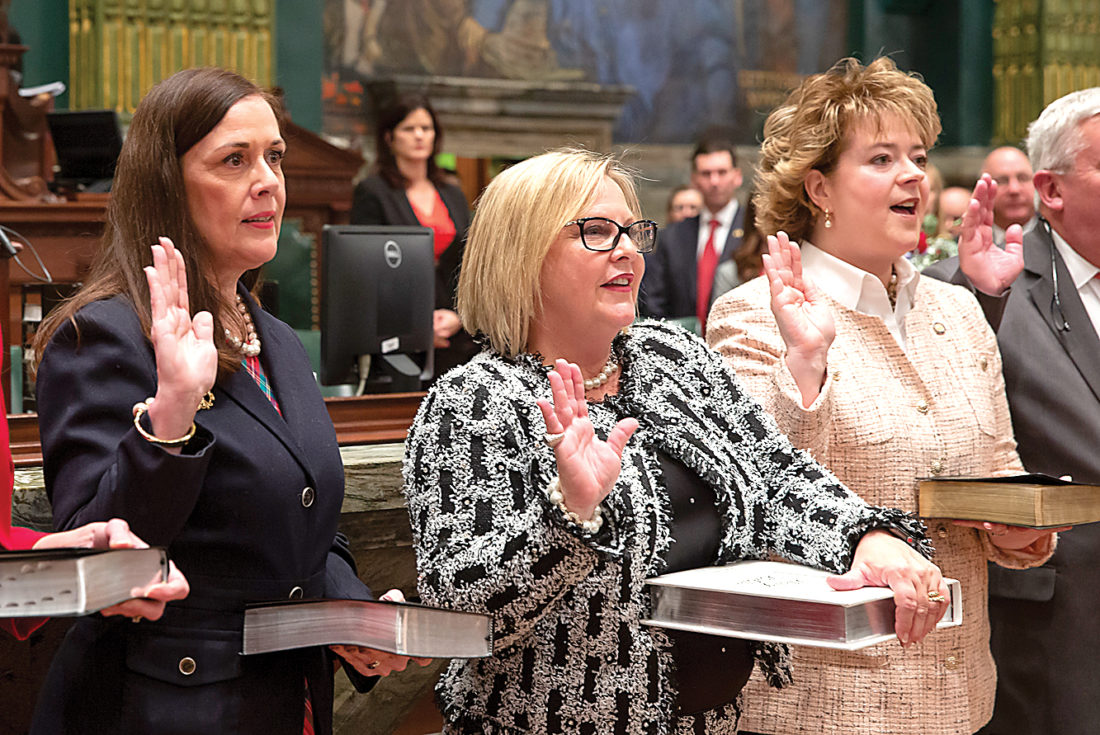 The Pennsylvania General Assembly underwent a major transformation Tuesday with 20 percent of its members taking office for the first time. Among the 43 new representatives and seven new senators taking the oath was 30th District Sen. Judy Ward of Blair County.

HARRISBURG — Pennsylvania lawmakers took the oath of office Tuesday, convening in the state Capitol on New Year’s Day under a state constitutional mandate they meet on the first Tuesday of the year.

Both chambers have smaller but still substantial Republican majorities compared to last session, 110 to 93 in the House and 29 to 21 in the Senate.

There are two vacancies among the 93 House Democratic seats, and a Republican senator is expected to step down and be sworn in to Congress later this week.

The 43rd House freshman, Rep.-elect Liz Hanbidge, D-Montgomery, will likely be sworn in later this month, after she returns from her honeymoon. 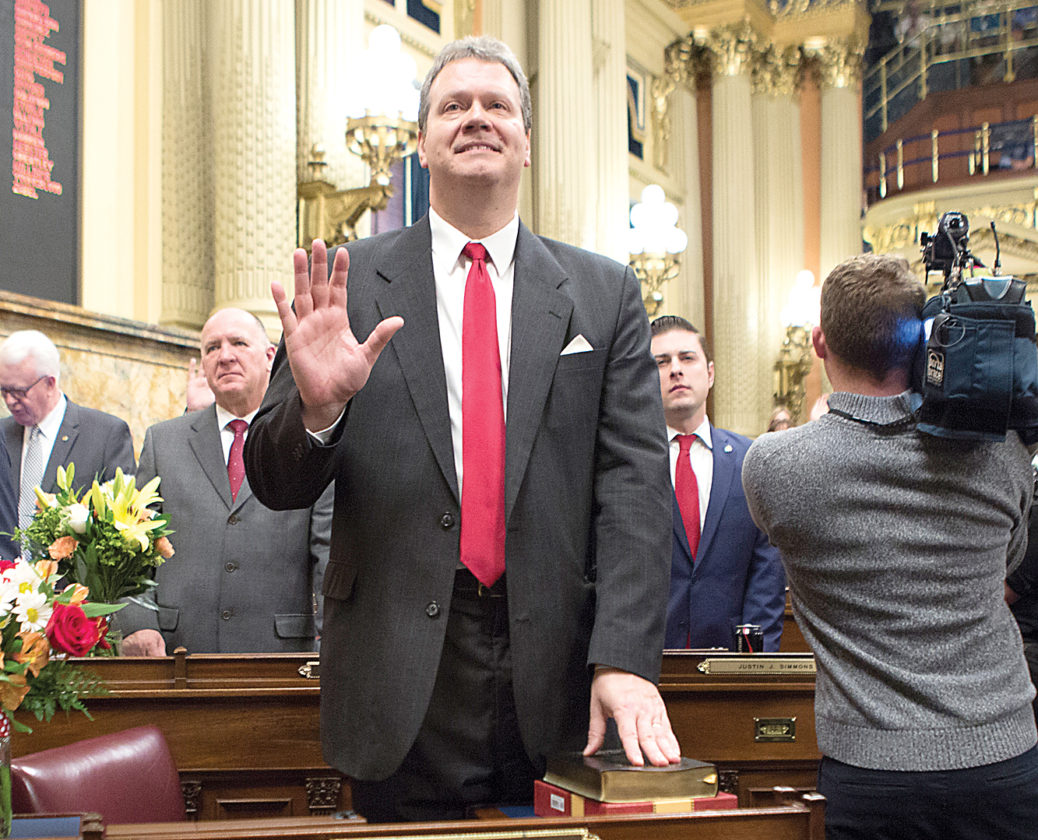 Courtesy photos The Pennsylvania General Assembly underwent a major transformation Tuesday with 20 percent of its members taking office for the first time. Among the 43 new representatives and seven new senators taking the oath was 79th District Rep. Lou Schmitt of Blair County.

The biggest change in leadership is in the House, where Rep. Bryan Cutler took over as majority leader, replacing Rep. Dave Reed, R-Indiana, who did not seek re-election to the Legislature.

Cutler urged members to “learn one another’s life stories in a personal and meaningful way,” recounting details of his own background in Lancaster County.

The House voted 142-58 to approve rule changes that including having the Ethics Committee investigate sexual harassment allegations, to cut from 24 hours to 12 hours the time that must pass before a final vote on an amended bill and to allow people who are not legislators or religious leaders to give the House’s opening prayer.

The House also set up a new panel called the House Government Oversight Committee, made up of five majority-party members and four from the minority.

It will have subpoena power and authority to take up matters on referral from the speaker or either floor leader. 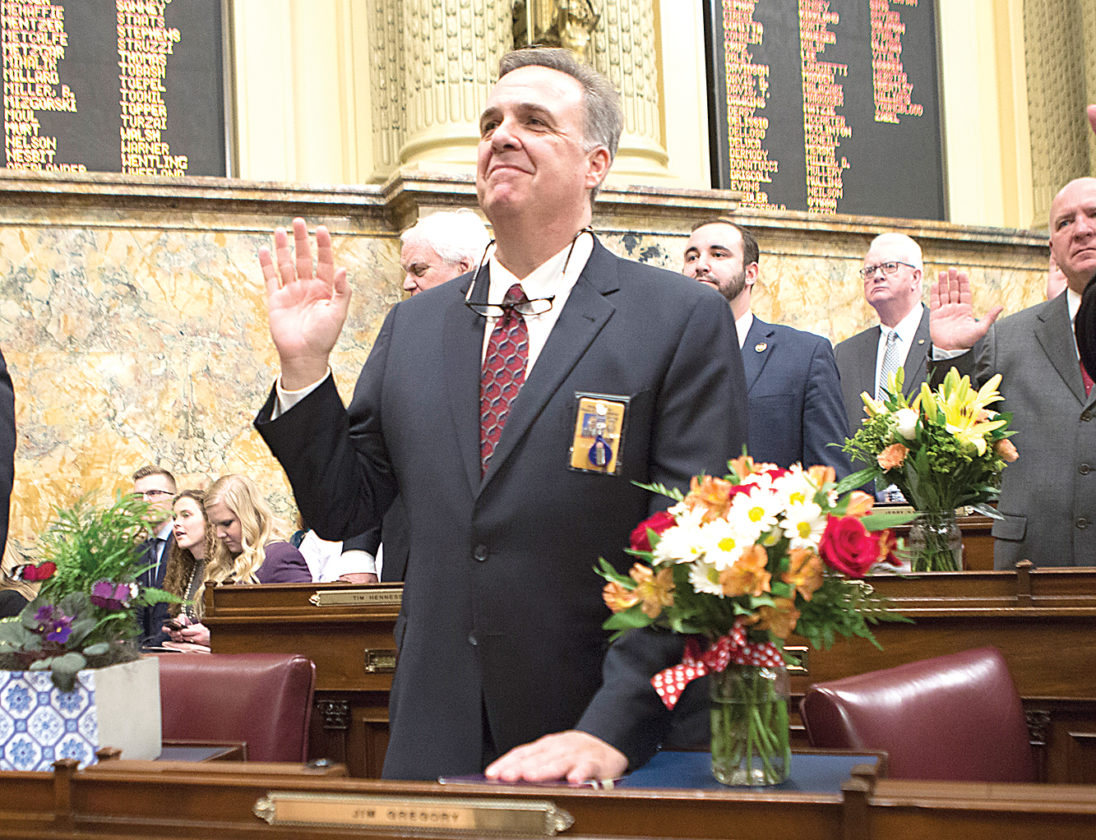 Allegheny County Re­publican Rep. Mike Turzai was re-elected to retain the gavel as speaker, as was Republican Sen. Joe Scarnati of Jefferson County as his chamber’s president pro tempore.

Scarnati urged his colleagues to treat one another with civility and “come together to find a compromise, to get results, because it’s results that we’re judged by at the end of the day.”

The Senate will have a new presiding officer once Braddock Mayor John Fetterman becomes lieutenant governor later this month.

Senate rule changes addressed proper attire for members and staff, phone use in the chamber and access to amendments.

In the Senate, Scarnati ended weeks of uncertainty on Friday by announcing he supported the seating of Democrat Lindsey Williams in an Allegheny County district. Republicans had raised questions about whether Williams had lived in the state for four years to the day before being elected, a state constitutional requirement. She was sworn in.

Williams’ win was one of five Republican seats in the Senate that Democrats flipped in November, including four in the Philadelphia suburbs. The two new Republican senators are Ward of Blair County and Kristin Phillips-Hill of York County, both filling vacancies created when an incumbent sought higher office.

Sen. Guy Reschenthaler, R-Allegheny, is scheduled to be sworn in to Congress on Thursday. A Senate GOP spokeswoman said he resigned his state legislative seat, effective Monday.

There are two vacancies in the House. Rep. Vanessa Lowery Brown, D-Philadelphia, resigned after being sentenced to probation in November for a bribery conviction, and Rep. Sid Michaels Kavulich, D-Lackawanna, died in office in October.