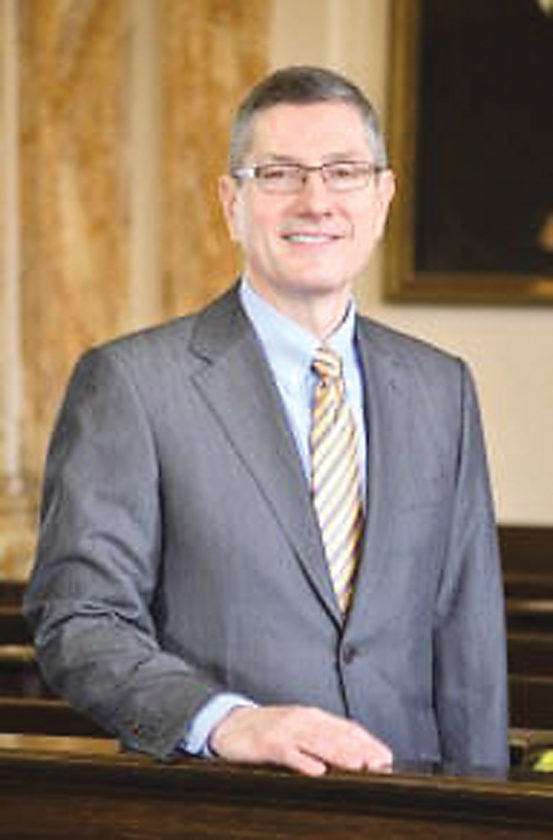 Longtime Altoona and Logan Township solicitor Larry Clapper will retire at the end of the year. Feted at a recent retirement dinner, officials and municipal staffers paid tribute to Clapper as a friend and adviser who cared about his municipal clients. “He really wanted the municipalities to do well,” Logan Township Manager Tim Brown said. Courtesy photo

It was an event more typical of those honoring a beloved retiring teacher or football coach than a retiring municipal solicitor.

A couple of weeks ago, about 20 elected officials and staffers from Logan Township and Altoona gathered at the Olive Garden — along with two members of the law firm Goldstein, Heslop — for a retirement dinner feting the city’s longtime — and the township’s even-longer-time — attorney, Larry Clapper.

“Larry’s last supper,” said Logan Township Supervisors Chairman Jim Patterson, who organized the event and who has known Clapper since they were in first grade to­gether at Edison Elementary School.

“Thank you for being our friend, our attorney, our adviser,” Patter­son said afterward during proclamations and reminiscences.

“I was very, very touched,” said Clapper, who’s slender and quiet with modest demeanor. “For them to take their time on a cold weekday night and come to have dinner with me.”

When he graduated from Duquesne School of Law in 1986, he had no intention of becoming a municipal lawyer, but when he got to Goldstein, Heslop, the firm he retired from — it was Leopold, Eberhardt and Goldstein then — partner Bertram Leopold was moving on to became a judge, creating a vacancy for his post as Logan solicitor.

The firm nudged Clapper into that vacancy.

“Always something different,” he said. “You can be at a municipal meeting and a zoning issue pops up, a code issue, employment issues, ethics, the Sunshine Law.”

Unfortunately, most of those meetings were in the evenings, which could be hard on family life, he indicated.

He was warned, though: When he was working as a parole officer and applying for law school, visiting Judge John Cherry told him, “The law is a jealous mistress.”

The youngest of five children in a blue-collar family and the first to graduate from college, Clapper took up law in hopes of learning how society and government operated. He also wanted to be part of a profession that dominated the history books that he liked to read about people who made a difference — including Abraham Lincoln and many other presidents, he said.

As a lawyer, he preferred working out issues rather than warring over them.

Zoning was a typical area of potential conflict, and it often forced him to tell residents what they didn’t want to hear, especially in cases involving purchase of a home in a zone that allowed development inimical to residential enjoyment.

“I hated doing that,” he said. “People’s homes are their pride and joy — that’s where you can be king, right?”

But if homes were in an industrial zone and a factory or a bar moved in next door — which was their right by the rules of the zone — there might not be much for the homeowners to do but accept it, he said.

He would try to put himself in their place, however, and he felt for them and would try to broker arrangements to ameliorate the problems.

If the problem was a noisy bar next door, he might ask the tavern proprietor if the music could be turned down or the lights moved, he said. Sometimes such a proprietor wouldn’t have realized his establishment was causing an issue, Clapper said.

Personnel cases tended to be even thornier.

Sometimes the outcome of those cases was discipline and even termination, and that would affect not only the worker, but his or her family and co-workers.

Clapper would try to work on these cases also for a better result, suggesting to staff or elected officials to “give them chances and goals to try to help,” he said.

At a recent township meeting, officials credited Clapper with keeping them “out of trouble” and taking pressure off them in connection with difficult cases where the answers weren’t obvious.

You need to trust the solicitor, one said.

He sought to ensure he was worthy of that trust, Clapper indicated at the dinner.

“He really wanted the municipalities to do well,” Brown said.

His stress on finding common ground, rather than nurturing antagonism, quelled township fears of annexation and brought Logan and the city together over the past generation, Patterson said.

“You brought us together in friendship,” he said.

The spirit of friendship has played out in joint organizations, including the Intermu­ni­cipal Relations Committee, the Central Blair Recreation and Park Commission and others, Patterson said.

“I tried to encourage respect for one another,” said Clapper, adding that he was proud to have been the first solicitor to represent both municipalities.

City officials credited him for helping guide Altoona through its stint under the state’s Act 47 distressed municipalities program.

Clapper also helped guide the city through the creation of a home rule charter.

A proclamation from the Intermunicipal Relations Committee talked about his “kindness, energy and graciousness.”

A proclamation from the city talked about his “integrity, professionalism and work ethic.”

“I made a very good living,” Clapper said of his career. “I feel very blessed to have led the life I have.”

He plans on continuing to work, “probably more for a church or a charity,” he said. That work may focus on St. Paul’s Cathedral, the parish he’ll be part of after moving into his recently purchased condominium in the Shadyside neighborhood of Pittsburgh.

He also plans to travel to places that include Europe — Italy particularly.

“Thank you for being our friend, our attorney, our adviser,” Patterson said at the dinner.

“I’m glad our paths of life have crossed,” Clapper said.

Work history: Adult parole officer, Blair County, early 1980s; attorney with Goldstein, Heslop and its predecessors, 1986 to present. Clapper will retire at the end of the year.