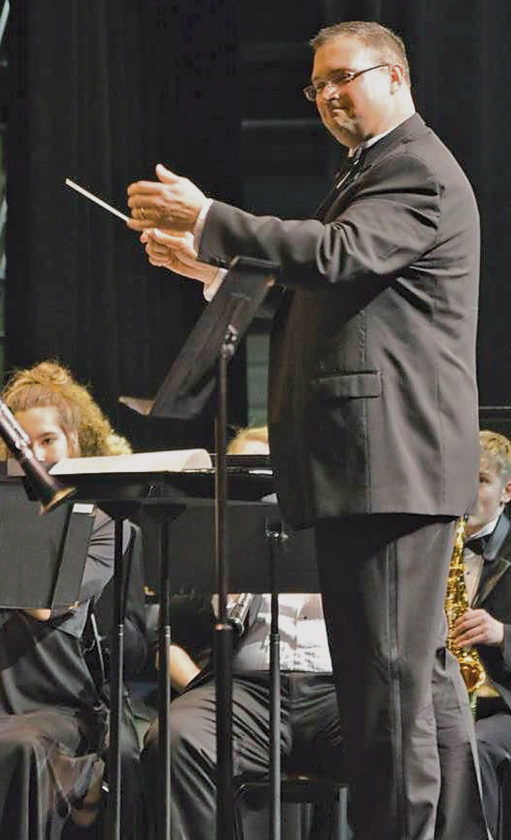 A Grammy Award is within grasp for a local music teacher.

Each year the Recording Academy recognizes teachers who make a lasting impact on students and music education.

The Recording Academy and the Grammy Museum selected the finalists from more than 2,800 initial nominations from all 50 states.

The winner will be announced during Grammy Week 2019, which is scheduled to start Feb. 6.

“I am extremely honored and humbled to receive this recognition,” Sheehan said Wednesday.

If Sheehan wins, he will be flown to New York to attend the 61st annual Grammy Awards and will take home a $10,000 prize. If he does not win, he is nonetheless promised a $1,000 prize, and the school will receive a matching grant.

“I am very blessed to work with amazing students and colleagues and have friends and family who support me with all that I do,” Sheehan said. “I believe that music changes lives for the better, and I am very committed to making sure all children have access to a quality music education that is relevant and meaningful.”

Sheehan has been teaching at Hollidaysburg Area since 2005, and the music program has become renowned.

For the past seven years, Hollidaysburg has been named one of the Best Communities for Music Education in the United States by the National Asso­ciation of Music Merchants Foundation.

Now, former students of Sheehan are propelling him along his Grammy journey, starting with Rachel Kaneshiki, who nominated him in February when the Recording Academy opened nominations.

Sheehan said he was surprised and thankful to Kaneshiki for nominating him, and he advanced through the first round of 2,800 nominees.

A written survey determined the top 200 quarter-finalists. After that, candidates were asked to submit a resume and respond to eight questions in the form of videos. They were also asked to share an eight-minute, unedited video of their teaching.

For the videos, Sheehan gained help from a former saxophone student with experience on the high school TV production team.

Preston Shoemaker, 19, said he was thrilled to help Sheehan with the video submission process.

“He is always there for everybody. I went from being just another musician in the class to becoming an all-state musician playing at Carnegie Hall in New York, all because of Mr. Sheehan and the Hollidaysburg music department.”

Shoemaker spent most of June on the video project, interviewing community members and faculty.

All the nomination materials, including the video submission, were reviewed by a committee from across the country to determine the top 25 semi-finalists.

From there, the Grammy committee narrowed down the Top 10 finalists.

“In my 29 years in education, I have never known someone to have such a profound and lasting impact on the lives of so many people,” Gildea said. “From the countl­ess students that he has taught, to his fellow music instructors and those whom he meets through his leadership role in both state and national organizations, Scott Sheehan is truly de­serving of this incredible recognition.”

His resume is long. He is an active guest conductor and clinician throughout the country and performs trumpet with the Hollidays­burg Community Band, where he also serves as Associate Conductor.

Additionally, he performs with the Altoona Brass Collective and the Blair County Brassworks for various community events and local church services.

“I couldn’t think of a better man to get this recognition,” Shoemaker said. “I’m ex­treme­ly proud of him, no mat­ter the outcome. I couldn’t be happier for him.”

Sheehan said the recognition is really for the Hollidaysburg community.

“As much as it’s my name on the recognition, it’s about the team we have here at Hollidaysburg — the students, faculty, my family and friends,” he said. “I serve music education in a lot of different ways. It’s never been about awards or recognition. It’s about the kids.”

Immediate-Past President of the Eastern Division for the National Association for Music Education/ current program Chairman for the All-National Honors Ensembles.

Active guest conductor and clinician throughout the country.

Performs with the Altoona Brass Collective and the Blair County Brassworks for various community events and local church services.

Holds bachelor’s degrees in music education and music marketing from Clarion University and a master’s degree in Music Education from Pennsylvania State University.

Scott and his wife, Amy, live in Hollidaysburg and have a daughter, Elizabeth.

‘Be grateful for your blessings’

Blair County and Central Pennsylvania businesses can now apply for a grant to help them recover from the effects of ...

Amtran GM gets OK to act as necessary

Amtran is allowing General Manager Eric Wolf to act as he deems necessary in response to the coronavirus crisis, ...

Going out of the way to save the TP

How’s everybody doing right now? Hang in there. Try to find some humor, even in the smallest and most mundane, of ...

Three juveniles have been charged with vandalizing athletic fields in northern Blair County in early ...