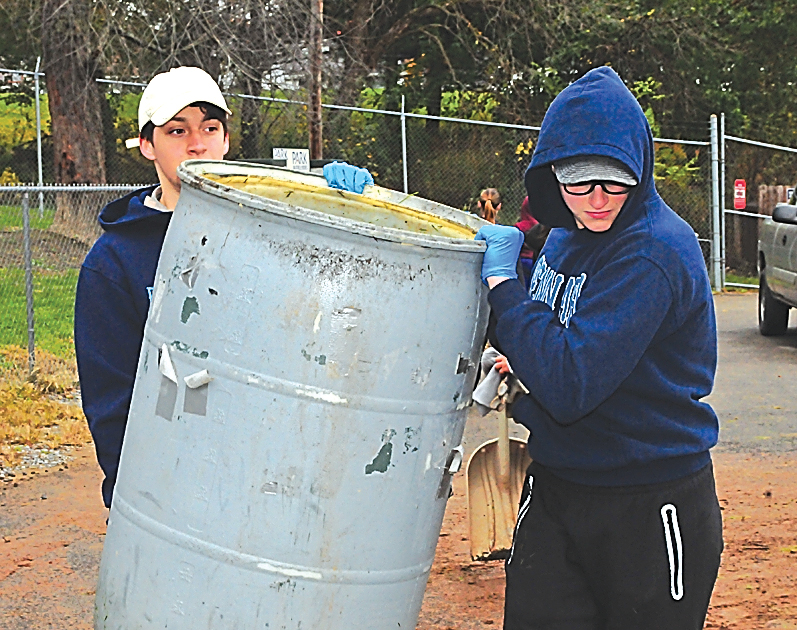 Mirror photo by Greg Bock / Christopher Perez and Evan Sanders, both 15 and of Altoona, get ready to dump a barrel of grass clippings carried from the outfield on Saturday. The boys joined more than 200 others to clean up at East End Ball Field a week after it was vandalized.

A week after a few vandals wreaked havoc on the East End Ball Field, more than 200 people from Altoona and around Blair County worked Saturday to clean up and get the field ready for next year.

“It’s about giving back to the neighborhood,” said Michael Barnes, 50, who lives five blocks from the field on the city’s East End, just off East Crawford Avenue and Kettle Street.

Barnes called what happened over a few hours on Oct. 27 “a travesty,” and said he brought his son, Isaiah Barnes, to teach him about community service.

“I think it’s a good thing so many people came out to help,” said the 17-year-old Barnes, who played baseball in the Logan Township League and is an Altoona Area High School football player.

The elder Barnes, who was busy Saturday morning clearing out drainage grates that were clogged up with clay and dirt from the vandalism, said he wasn’t surprised by the turnout, noting that Altoona is a place where people come together to help each other.

“Sometimes, out of bad comes good,” Barnes said. “And that’s what we’re seeing today — a reflection of the good.”

Altoona police said two 11-year-olds and a 9-year-old — all boys — broke into five of the field’s buildings on the evening of Oct. 27, and destroyed almost everything they could get their hands on.

Damage is estimated at between $10,000 and $20,000 and the three kids now face felony charges in juvenile court.

“It was so overwhelming,” said Gene Himes, field and equipment manager with the East End Youth Baseball League, about the turnout.

Himes said help has poured in from around the area since the damage was discovered a week ago.

“Everyone had their hands doing something,” Himes said, adding food was donated by Papa John’s Pizza, Marzoni’s, Texas Roadhouse and Martin’s Grocery Store to feed the volunteers.

Fiore True Value Hardware donated tools and implements for the clean-up and the Altoona Curve grounds crew took care of getting the infield in shape for next year, Himes said.

For the field’s concession stand, where much of the kitchen equipment was rendered unusable, Sheetz has stepped in to donate two microwaves, a hotdog roller and cheese machine, said Britt Waite, who works for Sheetz and is a longtime volunteer with the rival Altoona Area Baseball Association.

Waite and Himes joked that during the summer, their respective baseball leagues are competitive, much like Pitt and Penn State.

“But when something happens, boom — we’re here to help,” said Waite. “When this stuff happens, you’ve got to help. They would do it for us and we’ll do it for them.”