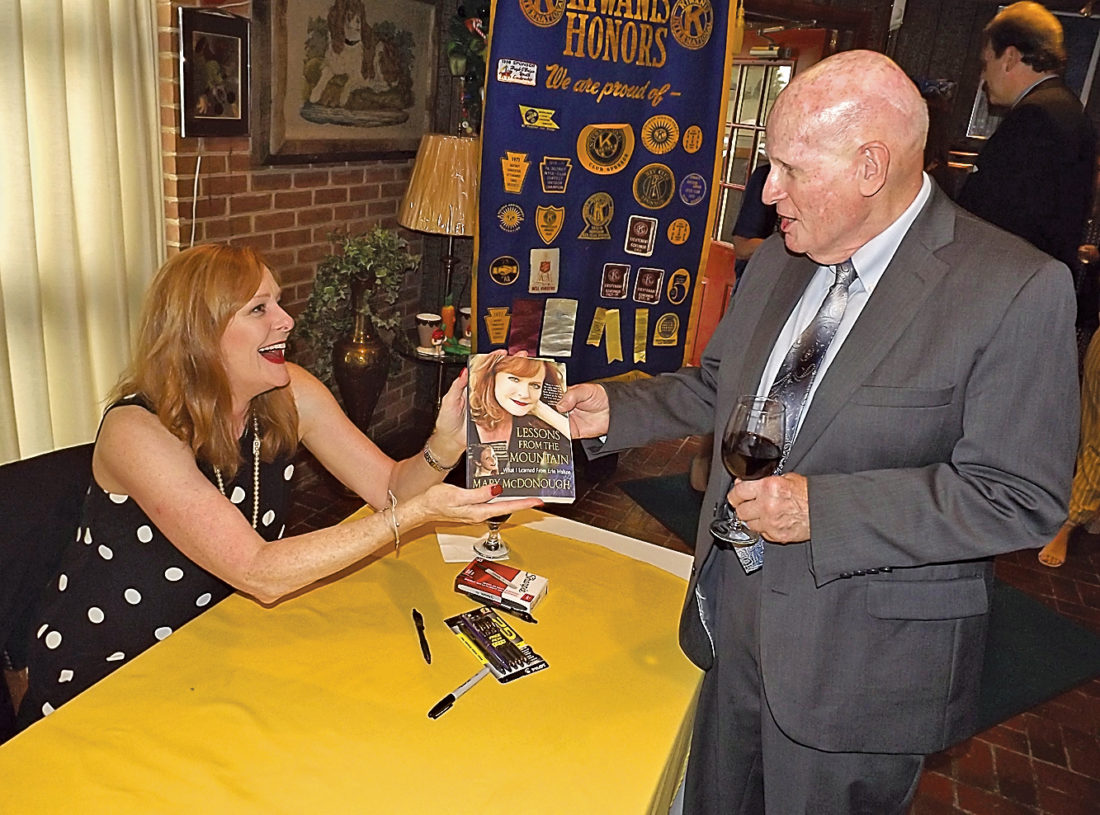 Actress Mary McDonough had a message Saturday night for members of the Kiwanis Club of Altoona, which is celebrating 100 years of helping underprivileged youth.

If a child appears to have no problems, don’t be afraid to ask, McDonough said.

When growing up as “Erin Walton,” the middle daughter on “The Waltons,” a 1970s hit TV show, McDonough said she was too afraid to talk about her fears or ask questions.

She was 10 years old, she said, when chosen to be Erin in “The Homecoming,” a 1971 movie that led a year later to the weekly TV series about a family living in rural Virginia during the Great Depression and World War II years.

“I went out on an audition because they wanted a redhead,” McDonough said.

After taking on the job, McDonough said her parents regularly described her as “so lucky.”

But McDonough said she didn’t feel lucky. Instead, she felt that she had been “whisked out of the McDon­ough family and plopped down in the Walton family.”

And while she had taken dance lessons, she had had no acting lessons.

“I had no idea what I was doing and I didn’t know that it was OK to ask,” she told Kiwanians at their anniversary dinner at the Calvin House Saturday.

To deal with her feelings, McDonough said she initially clammed up and said nothing. Then she tried to address her fears by getting everybody’s approval. But that didn’t work out, she said, because Erin got older and was known as the “the pretty one.” But Erin never won beauty contests and she endured more than one failed relationship.

“How often did Erin kiss and cry?” McDonough asked. “A lot.”

McDonough recalled a day when actor John Ritter, who played Rev. Fordwick on the TV show, approached her and asked what was wrong. She told him — about three or four times — that nothing was wrong. And in response, he told her about a journal he kept when he was younger, she said, and that prompted McDonough to start writing.

“I poured all my tears and fears into those journals,” she said.

Before Ritter died in 2013 of an aortic dissection in his heart, she said she got to tell him that he saved her life.

Despite the emotional turmoil that continued into her early adult years, McDon­ough is now a 57-year-old public speaker and workshop leader who focuses on helping individuals with personal change.

She continues to take on acting roles and has written several books, including “Christmas on Honeysuckle Lane,” which will be the basis of a movie to be aired in Novem­ber on the Hallmark Chan­nel. Two days before coming to Altoona, McDon­ough had driven to Con­necti­cut to film her cam­eo appearance in the movie.

Kiwanis Club of Altoona President Dave Scott ar­ranged for McDonough to be the keynote speaker at the anniversary dinner, which included proclamations and recognitions from state and local leaders.

“We all had crushes on John-Boy,” McDonough ad­mitted in reference to Richard Thomas, the actor who played the oldest Walton son. “He was our big brother, and he was so cool … But none of us dated each other.”